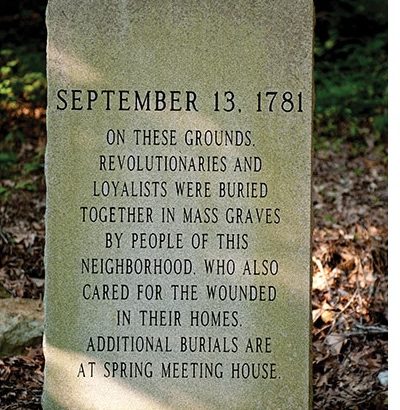 “When Joe Lindley walks down the hill from his Alamance County flour mill, it’s both a short trip and a long one. Historical markers stand here, noting a turbulent time in both the history of North Carolina and his own family.

The land around the peaceful mill, where Lindley has produced organic flours since 1976, was the site of one of the bloodiest battles of the American Revolution.

On September 13, 1781, the unofficial end of the Revolutionary War was only a month away. Six months earlier, Maj. Gen. Nathanael Greene confronted British forces at Guilford Courthouse in North Carolina’s most famous battle of the war. The Battle of Lindley’s Mill, which took place on that September day, left an estimated 52 dead and 180 wounded. The tale of the battle involves kidnapped politicians, family conflict, and a colonel who used what today might be called terror tactics.”

“Joe Lindley’s ancestor, Thomas Lindley, started the mill on Cane Creek in 1755. “I like to tell people there was a Lindley’s Mill before there was a United States of America,” Lindley says. “Thomas Lindley was a Quaker — nonviolent people who were firm believers in individual rights. It must have been a pretty tough course to take back then because you were probably expected to take one side or the other.”

Violent roving militias added to the problems. “There was a power vacuum in 1781. There were no official forces left here,” says Josh Howard, research historian in the North Carolina Office of Archives and History.

Greene’s Continental Army had moved into South Carolina. British Gen. Charles Cornwallis had marched into Virginia. The few hundred British stationed in Wilmington made up the only large body of nonmilitia troops of either side left in the state.”

“The conflict extended into the Lindley family. Three of Thomas Lindley’s sons were Loyalists, and one fought for independence, according to The Battle at Lindley’s Mill by Stewart Dunaway.”