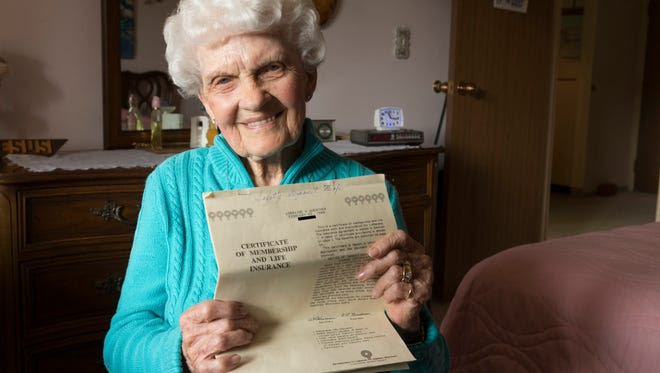 From the Milwaukee Journal Sentinel.

“Lorraine Guenther and Thrivent Financial insurance company had a deal, or so she thought.

She would pay them a premium of $500 a year for the rest of her life. And they would someday provide a death benefit of $25,000 to cover her funeral and burial.

The universal life policy took effect in 1988 when Lorraine was 67, and it came with a maturity date of February 2021 when she is 100.

But now, three years earlier than that, the company is telling this grandmother the cash value of her policy will dwindle away to nothing later this year, and the death benefit will be gone, too.

At age 97, she apparently has outlived her life insurance.

“In my words, they’re penalizing me for living,” she said. “I hope nobody else takes out that policy because they’re going to have the same problem I’ve got right now. When they need it, it won’t be there.”

Part of what’s happening here is that the cost of insuring someone so old is chewing up all the cash value of the policy at a rate exceeding $300 a month, double what it was three years ago. The policy had a cash surrender value that hovered around $10,000 10 years ago, but it’s down to $2,800 now and dropping fast.

Lorraine contacted Thrivent recently and was put in touch with an agent who suggested that lowering the death benefit to $10,000 would buy her some time with the policy, but not beyond next year. Lorraine turns 98 in April.

“He said, ‘The Lord has been good to you and has allowed you to live all these years.’ ”

“I’m very grateful. Thank you, mister,” she replied. “But I still expected to get my money when I passed away so I could be buried.”

“The men would come to church and talk to us and we knew them as friends. The man who prepared it for us was a friend of my husband’s,” she said. “It’s your church that’s doing it so you do feel comfortable.””