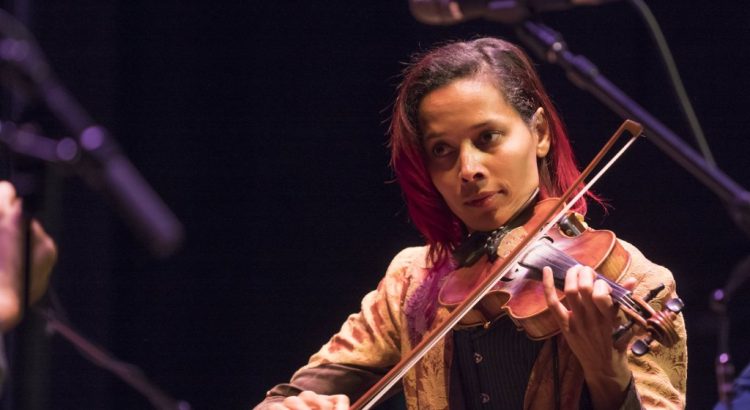 From Made in Greensboro.

She’s a multi-talented artist. A singer, banjo player, violinist, flat foot dancer, and actor who has used her talents to tell untold stories of the African American experience.

Now this Grammy-award winner, internationally renowned folk artist, and MacArthur Genius Fellow Rhiannon Giddens will return to Greensboro, her childhood home, as a guest curator for the NC Folk Festival, September 7-9 in downtown.

Rhiannon was born in Julian and moved to Greensboro when she was about seven years old. Growing up, music was always a part of her life. Her family was always singing.

“I was in the Greensboro Youth Chorus. It was a great beginning for me to organized music,” Rhiannon says of the local children’s choir. “It was a big influence on me and a big part of my upbringing.”

She studied music at the Governor’s School of North Carolina, an experience that prompted her to attend Oberlin Conservatory. She studied classical voice. After undergrad, she started a master’s at the UNC Greensboro School of Music.

“I had a full lyrical voice and was going to go out and conquer the operatic world. But I kind of realize it was not really jiving with who I was as a person. I kind of got burned out a bit and turned to other music.” she says. “What lead me away from opera was wondering, ‘What can I offer this art form that nobody else is offering?…I want to be somewhere I can make a difference. I found string band music and the history of black string band music. I thought, this is where I can absolutely offer up something different.”

She came into her own as a member of the Carolina Chocolate Drops, an African American string band playing Piedmont blues. The group’s 2010 album Genuine Negro Jig earned them a Grammy for Best Traditional Folk Album. The band has been lauded for reclaiming the African American contribution to American folk music.”

“Rhiannon will be performing throughout the weekend at the inaugural NC Folk Festival. She’s worked with the festival to curate a series of events, including a presentation of jazz, spoken word and tap dance and a symposium of banjo scholars.

“I was so impressed with being in Greensboro for the National Folk Festival three years ago and seeing all the people and all the diversity. That’s what Greensboro is. I hope that it continues forever and becomes a cherished weekend every year to see the world come to Greensboro.””