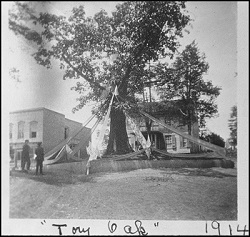 “In 1776 the royal governor of North Carolina initiated a plan to conquer the state, and back country Tories were formed into militia companies. Cleveland took his company of riflemen to join the Surry militia, which summarily dispersed the Tory rising in Surry County. They then proceeded south to march against the Tories on the Cape Fear. “Tory risings” and “Patriot retaliations” were the most significant feature of the civil war on the Upper Yadkin. When Tory prisoners were taken,Cleveland administered punishment with his own sense of rigid justice. Reconstructed Tories were allowed to take an oath of loyalty to the state and were set free; unregenerate Tories were hanged. Cleveland‘s vigorous methods did not always find support. In the fall of 1779 two Tories were hanged by Cleveland scouts, and for this act he was indicted for murder in the superior court of Salisbury; he was ultimately pardoned by the governor. Cleveland himself was once captured by the frontier Tories, but the quick action of his brother, Robert, brought about his rescue.”

“James Coyle and John Brown, two notorious Tory plunderers….were captured by some of Cleveland’s scouts and brought to Wilkesboro and Col. Cleveland had them hung with Wilfong’s clothes line on the oak tree that is yet standing just north of the court house in Wi1kesboro.”

“Every Tory in the country knew full well that Cleveland was probably their worse enemy; how prominently he had figured at King’s Mountain, and had given his influences for the Tory executions at Bickerstaff’s and caused the summary hanging of Coyle and Brown at Wilkesboro”

“The prisoners were Captain Riddle and two of his associates named Reeves and Goss. They were brought to Wilkesboro and tried by court martial and sentenced to be hung. But in order to gain favor with the Whigs or get them in a condition so that they might escape Riddle treated them freely to whiskey. Col. Cleveland informed him that it was use less to be wasting his whiskey as he would be hung directly after breakfast. The three Tories were accordingly hung on the notorious oak that is yet standing in Wilkesboro. Mrs Riddle, wife of the Tory leader, was present, and witnessed the execution of her husband and his comrades.”

“Many other Tories fell into the hands of Cleveland’s brave troopers and summary punishment was meted out to them in Cleveland’s usual way. Once a Tory leader named Tate and eight others were captured and Cleveland and his men had them near old Richmond, in Surry county. When Cleveland was about to execute the leader, Colonel William Shepherd protested against such summary justice. “Why,” said Cleveland, “Tate confessed that he has frequently laid in wait to kill you.” “Is that so?” inquired Shepherd, turning to the Tory captain. Tate confessed, and Shepherd yielded to Cleveland’s plan and soon Tate dangled from a limb. Tate’s associates suffered only imprisonment as other prisoners of war.

On another occasion Col. Cleveland visited Col. Shepherd at Richmond where ho had two notorious horse-thieves in prison. Cleveland insisted on swinging them to the nearest tree lest they should make their escape and yet further endanger the community–at least one of them, whose crimes rendored him particularly obnoxious to the people. One end of a rope was fastened to his neck when he was mounted on a log and the other end tied to a limb; then the log rolled from under him and he dangled from a limb in plain view of the prison. The other culprits was shown his comrade swinging from the limb and he was given his choice,to take his place beside him or cut off both his own ears and leave the country forever. The Tory knew it would not do to meddle with old Round About, so he called for a knife. He was handed a case knife, and after whetting it on a brick he gritted his teeth and sawed off both his ears. He was then liberated and he loft with the blood streaming down both cheeks and was never heard of afterwards.”