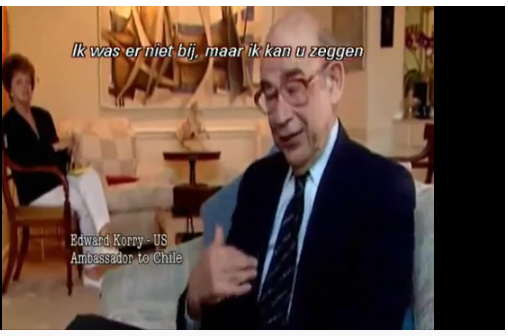 From the Charlotte Observer obituaries.

Marian Patricia Korry, a resident of Charlotte, NC for the past 27 years passed away at the age of 90 on September 13 at White Oak Manor of Charlotte. Born Marian McCarthy in Syracuse, New York, she was the daughter of Dennis & Mildred McCarthy and granddaughter of NY Governor Nathan Miller. She graduated from Vassar College in 1947 and soon after departed for Budapest, Hungary to serve as secretary to the American Ambassador’s wife where she also contributed 60 minute current event reports on Radio Free Europe. She married Edward M. Korry, in 1950 who became the European editor for UPI, then Look Magazine and later US Ambassador to Ethiopia and Chile. She spent 23 years living in Belgrade, Berlin, Paris, London, NYC, Ethiopia and Chile before living in Washington DC, Briarcliff Manor, NY and Stonington, CT. In 1984, they left the US and lived in Pully, Switzerland returning to settle in Charlotte. She was actively involved in community fund raising for orphanages and schools and sitting on community boards. A writer, editor, student of art, and most recently a docent at the Mint Museum where she delivered lectures and contributed writings.”

From one of my encounters with Pat Korry.

“Here is the rest of the story.

She gave me her initial memoirs to critique which I agreed not to divulge.”