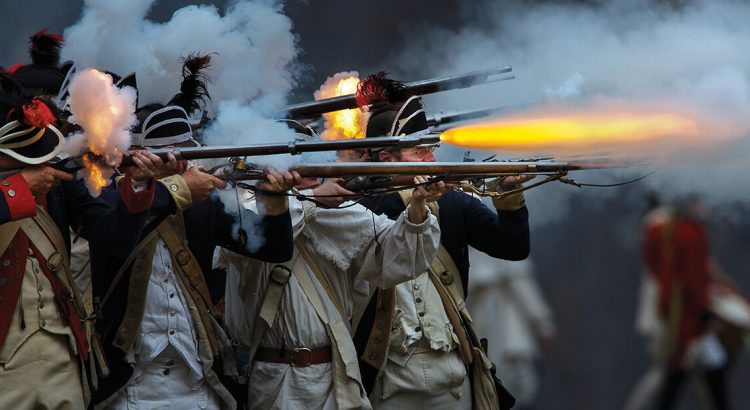 “Photo Essay: Reliving the Revolution through Reenactment in Guilford County

On a cold March day in 1781, a quiet backcountry farming community in Guilford County became the site of a pivotal battle in the American Revolution. Today, the bravery of the soldiers who fought for our country’s independence is honored with a powerful reenactment.”

“Cornwallis’s soldiers number only 1,900, but his confidence is high; Greene’s forces include 1,700 Continentals (three-year enlistees in the regular army) and 2,700 militia (farmers and tradesmen who became temporary soldiers in an emergency). That mid-March morning, Greene deploys his men in three lines across the Great Salisbury Wagon Road that leads southwest — toward the British camp. The battle begins around noon. Greene’s first line, consisting largely of North Carolina militiamen, faces cleared farm fields, and collapses when the center gives way. Still, the rebels inflict heavy casualties, and one volley of 1,500 muskets later causes a British officer to remember that “one half of the Highlanders dropped on that spot.”

The second line — Virginia militia stationed in heavy forest — fights in bloody skirmishes for an hour before the redcoats break it as well. But the heaviest fighting takes place on the third line — where the Continentals from Maryland and Virginia are stationed. Though some of these experienced soldiers retreat, more battle on furiously in hand-to-hand combat. General Cornwallis orders his artillery to fire on an advancing American cavalry, killing men on both sides in the process. In the melee and smoke cover, Greene orders his men to retreat. Cornwallis claims the day.

And although the battle is over, and tactical victory goes to the British, Greene’s army remains mostly intact while more than 25 percent of Cornwallis’s men have been killed. “I never saw such fighting since God made me. The Americans fought like demons,” Cornwallis famously states. He abandons his Carolina campaign, heads for Virginia, and in October, surrenders at the Battle of Yorktown, the last major land battle of the Revolutionary War. On September 9, 1783, Great Britain formally recognizes the independence of the United States with the Treaty of Paris.”