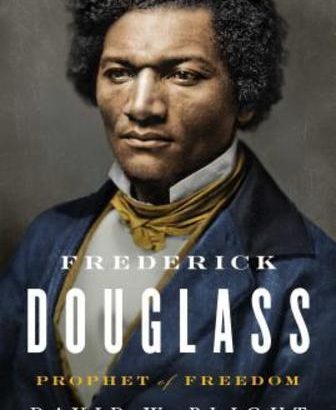 Readers who’ve been inspired by Frederick Douglass’ eloquent autobiographies will likely find David Blight’s 900-page Frederick Douglass: Prophet of Freedom — touted by its publisher as “the definitive, dramatic biography of the most important African American of the nineteenth century” — a demanding read. The complexities of race relations in America make it so, and the fact that Frederick Douglass, our first nationally recognized black civil rights leader, is one of the most multifaceted and controversial Americans to have shaped 19th-century thought, only amplifies the challenge. But Blight’s insights into Douglass’ radical evolution and the obvious correlation with the state of race relations in contemporary America make this meticulously researched and beautifully written biography well worth the time and effort.

Douglass was born Frederick Augustus Washington Bailey around 1818 and lived his early years on the Delmarva Peninsula, a few miles from the small town where this reviewer was born and raised. At age 13, he was sent to Baltimore, where he was taught to read by his owner’s wife, Lucretia Auld. He was eventually hired out to a “slaver breaker” in St. Michaels, a bayside village 10 miles west of my hometown of Easton, and after an attempted escape in 1836, he was briefly incarcerated in the Talbot County jail, an ominous stone structure adjacent to the courthouse I passed daily.

During my school years, I never once heard the name Frederick Douglass. There was no historical marker identifying the Sage of Anacostia as a local luminary (the only public monument in town, a bronze figure of a Confederate soldier cloaked in the stars and bars, was dedicated “To the Talbot Boys/1861-1865/C.S.A.”). No school or municipal building was named for the great man, and he wasn’t discussed in the Maryland history book we studied in the fifth grade. None of my childhood friends can recall any reference to Douglass. I was a college student before I learned of his extraordinary accomplishments and was compelled by curiosity to read his three autobiographies. Only then did it occur to me that growing up in Frederick Douglass’ backyard without learning about him was tantamount to being raised in Springfield, Illinois, without hearing the name Abraham Lincoln.”

“Blight also thoroughly examines Douglass’ varied causes and obsessions. He backed John Brown’s violent anti-slavery activities and was a staunch supporter of women’s rights. He carried on a long-term relationship with Ottilie Assing, a German feminist, freethinker and abolitionist, who sheltered him when he was charged with conspiracy in connection with John Brown’s raid on Harpers Ferry. He served as minister to Haiti from 1889 to 1891 and was deeply involved with the 1893 Haitian pavilion at the World’s Columbian Exposition in Chicago.

In 1884, Douglass married Helen Pitts, a white abolitionist from a prominent New York family, thus crossing the color line. All the while, Douglass continued to speak out against racial injustice, Jim Crow and peonage laws that in effect locked freedmen in a state of perpetual servitude. Late in his life, he was still railing on the effects of the pernicious color line: “(It) hurts us at midnight, it denies us accommodations in hotels and justice in the courts, excludes our children from schools, refuses our sons the right to learn trades and compels us to pursue only such labor that will bring the least reward.” The South won that war of attrition.

Blight’s biography is, for the moment, the definitive work on Frederick Douglass, although there is a need for a more insightful inquiry into the great orator’s religious, political and philosophical beliefs. After 900 pages of text, Douglass remains something of an enigma, a man whose intelligence, eloquence and determination almost changed America for the better

On the courthouse lawn in my hometown of Easton, Maryland there are now two statues, one celebrating the “The Talbot Boys” and another bronze that depicts Douglass, one hand on a lectern, the other raised beseechingly skyward. The town celebrates their most famous son “throughout the year, including Frederick Douglass Day in September and the annual Juneteenth celebration of abolition.” It’s about time.”