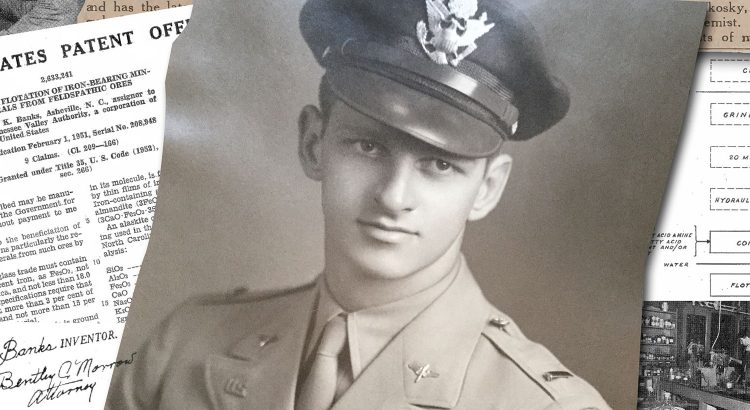 “The Man Who Made the Digital World Possible”

“For more than 60 years, Banks’ extraordinary achievement remained hidden, concealed by his own humility and a life led in service to others. Choosing family over his engineering dreams, Banks lived quietly in his hometown of Greensboro, North Carolina, until he died in the summer of 1992 at the age of 72—neither he nor his family knowing that the entire digital world would one day trace its roots to his legacy.”

“In the late 1940s, the elder Banks invented a process called froth flotation, which unlocked feldspar and mica from large deposits of quartz. In 1953, TVA patented Banks’ invention and made it freely accessible for mining companies to help build the struggling industry. Banks’ work revolutionized the mining business, created thousands of jobs, brought wealth to destitute communities and eventually lead to the creation of the microchip.”

“The froth flotation patent was the beginning of it all. Because of this process, two local industrial mining companies opened new mines in the area during this time,” says Pat Ezzell, TVA historian. “This bolstered economic activity in the region and drastically improved the welfare of those living there. But like much of TVA’s work, it’s still paying dividends today.”

“Banks was born in Greensboro, North Carolina, in 1920. He became interested in geology the summer after graduating from Greensboro Senior High School. It was during these short months that Banks left home and hitchhiked across the Southwest United States with a high school friend.

According to the younger Banks, the West’s rock formations and exquisite beauty enthralled his father and ultimately lead to the would-be inventor’s enrollment into North Carolina State University’s geology department in Raleigh.

At the same time, the North Carolina Department of Conservation and Development and TVA formed a partnership to begin a cooperative investigation of mineral resources in the rural and impoverished areas of North Carolina’s mountains. Banks’ professor, Dr. Jasper Stuckey, served as the state geologist on the project, creating an opportunity for Banks and four other student aides to work in the field.

The mission of the joint effort was to discover a scientific process to release mica and feldspar minerals from the large deposits of quartz in the area. If successful, the team would be able to create an entire mining industry that would spur the stagnant mountain economies that relied almost solely on farming.

But before this dream could be realized, the young geologist graduated and volunteered to serve in World War II.”

“Banks joined the Army Air Corps and volunteered for combat training. In his three-year tenure, he attained the rank of first lieutenant and served with the Sky Scorpions—567th squadron, 389th bomb group, 8th air force. He was a B-24 Liberator bomber pilot, and flew 20 combat missions over Germany during the last seven months of the war.”

“In 1948, Banks returned home as a decorated veteran and went back to work in the mountains under the direction of Dr. Stuckey and North Carolina State College. Together, they worked at the new Minerals Research Laboratory in Asheville, where Banks Sr. held the position of chief engineer. Although the state of North Carolina provided the new $85,000 research facility, TVA equipped the building and paid the salaries of the staff working in the mineral dressing lab where Banks developed froth flotation.

One Feb. 1, 1951, Banks filed the patent for his invention on behalf of TVA. The process quickly turned a small-town mining community into a global industry.”

“Like Thomas Edison and Steve Jobs, Banks Sr. was an extraordinary innovator whose passion for the unknown helped build the foundation that now drives the age in which we live.

“Very few people can claim their discoveries changed the course of human history,” says Gary Brinkworth, TVA director of Research and Technology Innovation. “Mr. Banks’s innovation efforts did just that and continue to help us achieve our 85-year mission of improving the lives of the 10 million Tennessee Valley residents we serve.””