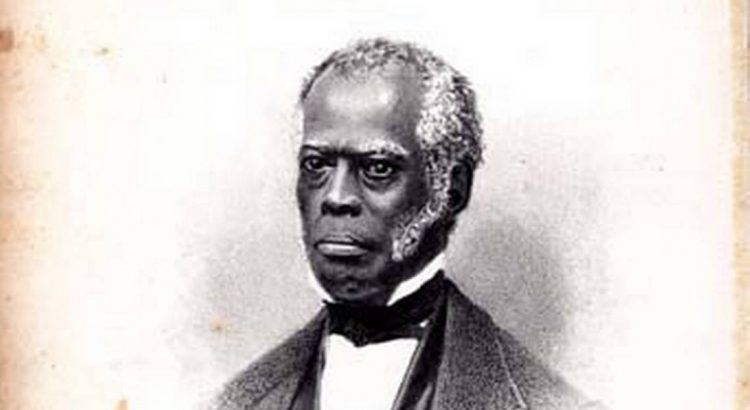 From the Narrative of Lunsford Lane published in 1848.

The small city of Raleigh, North Carolina, it is known, is the capital of the state, situated in the interior, and containing about thirty-six hundred inhabitants. Here lived Mr. Sherwood Haywood, a man of considerable respectability, a planter, and the cashier of a bank. He owned three plantations, at the distances, respectively, of seventy-five, thirty, and three miles from his residence in Raleigh. He owned in all about two hundred and fifty slaves, among the rest my mother, who was a house servant to her master, and of course a resident
in the city. My father was a slave to a near neighbor. The apartment where I was born and where I spent my childhood and youth, was called ” the kitchen,” situated some fifteen or twenty rods from the ” great house.” Here the house servants lodged and lived, and here the meals were prepared for the people in the mansion. The ”’- field
hands,” of course, reside upon the plantation.

On the 30th of May, 1803, I was ushered into the world ; but I did not begin to see the rising of its dark clouds, nor fancy how they might be broken and dispersed, until some time afterwards. My infancy was spent upon the floor, in a rough cradle, or sometimes in my mother’s arms : my early boyhood, in playing wiih the other boys and girls, colored and white, in the yard, and occasionally doing such little matters of labor as one of so young years could. I knew no difference between myself and the white children ; nor did they seem to know any in turn. Sometimes my master would come out and give a biscuit to me, and another to one of his own white boys ; but I did not perceive the difference between us. I had no brothers or sisters, but there were other colored families living in the same
kitchen, and the children playing in the same yard, with me and my mother.

When I was ten or eleven years old, my master set me regularly to cutting wood, in the yard, in the winter, and working in the garden in the summer. And when I was fifteen years of age, he gave me the care of the pleasure horses, and made me his carriage driver ; but this did not exempt me from other labor, especially in the summer.
Early in the morning I used to take his three horses to the plantation, and turn them into the pasture to graze, and myself into the cotton or cornfield, with a hoe in my hand, to work through the day ; and after sunset I would take these horses back to the city, a
distance of three miles, feed them, and then attend to any other business my master or any of liis family had for me to do. until
bed time, when, with my blanket in my hand, I would go into the dining room to rest through the night. The next day the
same round of labor would be repeated, unless some of the family wished to ride out, in which case I must be on hand with the
horses to wait upon them, and in the meantime to work about the yard. On Sunday I had to drive to church twice, which, with other things necessary to be done, took the whole day. So my life went wearily on from day to day, from night to night, and from week to week.”

“One day, while I was in this state of mind, my father gave me a small basket of peaches. I sold them for thirty cents, which was the first money I ever had in my life. Afterward I won some marbles, and sold them for sixty cents, and some weeks after, Mr. Hog, from Fayetteville, came to visit my master, and on leaving give me one dollar. After that, Mr. Bennahan, from Orange county, gave me a dollar, and a son of my master fifty cents. These sums, and the
hope that then entered my mind of purchasing at some future time my freedom, made me long for money : and plans for moneymaking
took the principal possession of my thoughts. At night I would steal away with my axe, get a load of wood to cut for twenty-five cents, and the next morning hardly escape a whipping for the offence.
But I persevered until I had obtained twenty dollars. Now I began to think seriously of becoming able to buy myself; and cheered by this hope, I went on from one thing to another, laboring ” at dead of night,” after the long weary day’s toil for my master was over, till I found I had collected one hundred dollars. This sum I kept hid, first in one place and then in another, as I dare not put it out, for fear I should lose it.”

“I found in the space of some six or eight years, that I had collected the sum of one thousand dollars. During this time I had found it politic to go shabbily dressed, and to appear to be very poor, but to pay my mistress for my services promptly. I kept my money hid, never venturing to put out a penny, nor to let any body but my wife
know that I was making any. The thousand dollars was what I supposed my mistress would ask for me, and so I determined now what I would do.

I went to my mistress and inquired what was her price for me. She said a thousand dollars. I then told her that I wanted to be free, and asked her if she would sell me to be made free. She said she would ; and accordingly 1 arranged with her, and with the master of my wife, Mr. Smith, already spoken of, for the latter to take my money*
and buy of her my freedom, as I could not legally purchase it, and as the laws forbid emancipation, except for ” meritorious services.”
This done, Mr. Smith endeavored to emancipate me formally, and to get my manumission recorded ; I tried also; but the court judged that I had done nothing ” meritorious,” and so I remained, nominally only, the slave of Mr. Smith for a year; when, feeling unsafe in that relation, I accompanied him to New York, whither he was going to purchase goods, and was there regularly and formally made a freeman, and there my manumission was recorded. I returned to my family in Raleigh, and endeavored to do by them as a freeman should. I had known what it was to be a slave, and I knew what it was to be free.”