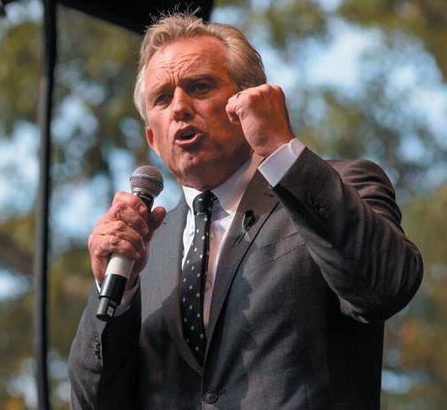 From the World Mercury Project.

Rita Shreffler: How did you first get involved in the autism/vaccine controversy?

Robert F. Kennedy: I was dragged kicking and screaming into this brawl. By the early 2000s, I was fighting multiple lawsuits on behalf of Riverkeeper and Waterkeeper against coal-fired power plants. I was touring the country speaking about, among other things, the dangers of mercury emissions, which, by then, had contaminated virtually every fresh water fish in America. Following many of these appearances, mothers would approach me. Their tone was always respectful but mildly scolding. They said that if I was serious about eliminating the perils of mercury, I needed to look at thimerosal. Vaccines, they claimed, were the biggest vector for mercury exposure in children. I really didn’t want to get involved because vaccines were pretty remote from my wheelhouse. I’d always been pro-vaccine. I had all my kids vaccinated and got my annual flu shot every year. But, I was impressed by these women. Many of them were professionals: doctors, lawyers, scientists, nurses and pharmacists. They were overwhelmingly solid, well-educated, extraordinarily well-informed, rational and persuasive.

RS: Was there a particular one of these mothers who finally got you to take the bait?

RFK: Yeah, my brother Max’s wife, Vicky Strauss Kennedy, introduced me to a psychologist named Sarah Bridges. Her son Porter was vaccine-injured and later diagnosed with autism. After an eight year legal battle, she had finally received compensation from the vaccine court, which acknowledged that Porter got his autism, seizures and brain damage from thimerosal and pertussis vaccines. She persuaded me to start looking into the science.

RS: That was a daunting request!

RKF: I have always loved science and I’m comfortable reading it. By then, I’d handled many hundreds of environmental cases. Almost all of them involved scientific controversies. When I started reading about thimerosal, I was dumbstruck by the gulf between the scientific reality and the media consensus. All the network news anchors and television doctors were assuring the public that there was not a single study that suggested thimerosal was unsafe or that it could cause autism. After a short time on PubMed, I’d identified many dozens of studies suggesting that thimerosal causes autism and a rich library of peer-reviewed literature—over 400 published studies—attesting to its deadly toxicity and its causal connection to a long inventory of neurological injuries and organ damage.

RS: What do we know about thimerosal safety testing?

RFK: First of all, vaccines are not subject to the safety rigors undergone by other pharmaceuticals in the FDA approval process. There are no large scale, double-blind, placebo controlled studies. And, in the one 1930 human study of thimerosal that predated its use in vaccines, all the subjects injected with thimerosal died. In 2004, an FDA official acknowledged in testimony before a Congressional committee, that no government or privately funded study has ever demonstrated thimerosal’s safety. On the other hand, there is plenty of science suggesting that thimerosal is NOT safe. Several hundred studies available on PubMed link thimerosal exposure to the neurodevelopmental and immune system diseases that are now epidemic in the generation of American children born after the CDC dramatically increased childhood thimerosal exposure starting in 1988. My book, Thimerosal— Let the Science Speak,summarizes these studies. The scientific literature inculpates increased thimerosal exposure as a culprit in the explosion of ADD, ADHD, speech delay, narcolepsy, SIDS, ASD, seizure disorder, tics and anaphylaxis, including asthma and food allergies. According to the CDC, one in six American children—the so called “thimerosal generation”—now suffers from a developmental disability. We have published a compendium of 80 published, peer-reviewed studies that strongly suggest a link between thimerosal exposure and autism.

RS: The CDC started adding to the vaccine schedule in the late 1980s and all these diseases, including autism, began spiking among kids in the mid-1990s. That’s when parents started seeing perfectly healthy children regress into autism after receiving their vaccines.

RFK: Yeah. A rising chorus of complaints from parents and pediatricians linked the new thimerosal-heavy vaccine schedule to an explosion in autism. In response, the CDC, in 1999, commissioned an in-house Belgian researcher, Thomas Verstraeten, to study the Vaccine Safety Datalink, the largest American repository of childhood vaccine and health records, collected by HMOs. The HMO data clearly showed that the massive mercury doses in the newly expanded vaccine schedule were causing runaway epidemics of neurological disorders—ADD, ADHD, speech delay, sleep disorders, tics and autism among America’s children. Verstraeten’s original analysis of those datasets found that thimerosal exposures increased autism risk by 760%. The CDC now knew the cause of the autism epidemic.

RS: How did the CDC react to the revelations in the Verstraeten study?

RFK: The vaccine branch called an emergency meeting of regulators from WHO, FDA, vaccine industry stakeholders and the American Academy of Pediatrics at the Simpsonwood Conferences and Retreat Center in Norcross, Georgia. They reportedly held the meeting off the CDC campus to shield the deliberations from freedom of information requests. During a frantic two-day debate, that group decided to embargo Verstraeten’s study. The CDC then pushed Verstraeten aside and assembled a team of industry and CDC scientists to rework the study using dodgey statistical devices to make the autism signal disappear. After four increasingly deceptive iterations, that team succeeded in eliminating the signal linking thimerosal with autism and a half dozen other neurodevelopmental disorders. The CDC published that version and told the public that thimerosal was safe. When parents asked to see the raw data, the CDC claimed that it had somehow “lost” all the raw data so that no independent group could check this result.

RS: Right, that’s when the CDC went into the business of creating its notorious phony epidemiological studies?

RFK: Exactly. Over the next two years, the CDC worked with the pharmaceutical industry to gin up seven epidemiological studies that purport to exculpate thimerosal from causing the autism epidemic. None of these studies pretend to be safety studies. Each of them simply looked for the presence of a small number of designated diseases in specific populations exposed to thimerosal. All of them are fatally flawed due to improper methodologies or deliberate fraud. Nevertheless, these are the studies that the CDC lists on its website—and that its spokespeople regularly cite—to defend mercury in vaccines. It’s worth noting that the CDC itself has so little faith in these studies that it derailed a scheduled 2012 review of their underlying science by the Institute of Medicine (IOM) and killed a 2006 review of thimerosal safety by the National Toxicology Program. Under CDC pressure, the Institute of Medicine made the astonishing declaration, in 2004, that, based on those seven flawed studies, the science was settled and no new studies on the causative relationship between thimerosal and autism should be undertaken or funded. That declaration effectively cut off support for any scientist who wants to investigate the link.

RS: The CDC touts those seven epidemiological studies across the globe as evidence of thimerosal safety.

RFK: Yes, and CDC and IOM officials left behind a very troubling email trail that makes it clear that those studies were deliberately manufactured to exonerate thimerosal. By the time I came across them, I was accustomed to dissecting research papers and spotting junk science. In my line, we call it “tobacco science” and the hired guns who generate it “biostitutes”. The CDC’s primary data manager on its widely touted Danish studies was a notorious con man and professional biostitute named Poul Thorsen, who actually pocketed the million dollars the CDC paid him to do the research. He is currently under indictment on 22 counts of wire fraud and money laundering by the U.S. Justice Department and is the star of the OIG’s Most Wanted List. Thorsen is on the run from the FBI in Europe. Nevertheless, the CDC still uses Thorsen’s studies as proof of thimerosal safety.

RS: Besides reading the science, did you do any kind of research?

RFK: I also spoke to the leading researchers, like [University of Kentucky Chemistry Department, Chairman, Toxicologist] Dr. Boyd Haley, and I called the researchers and experts at the federal agencies to get help understanding what I was reading. I spoke to the IOM’s Dr. Kathleen Stratton and pharmaceutical industry spokesman, Dr. Paul Offit.

RS: Well there’s a pair of villains! How did the conversations go?

RFK: Amicably. I had no antipathy toward either of them at that time. I had no clue about the pivotal role they both had played in deceiving the public about thimerosal safety. Both of them spoke to me willingly. Offit expressed admiration for my father, which is an effective way to butter me up. I asked them both the obvious question: “Why do we advise pregnant women to steer clear of fish because of neurotoxic mercury and yet inject much larger doses of mercury into pregnant women and their newborns?” They both repeated to me the thread worn industry canard that the “ethyl mercury in vaccines is not as dangerous as the methyl mercury in fish”, which everyone admits is highly neurotoxic. Offit explained to me that ethyl mercury wasn’t toxic because it leaves the human body so quickly.

RS: What was your reaction?

RFK: By then, I’d read Burbacher’s monkey studies which confirmed Offit’s assertion that the ethyl mercury from vaccines rapidly left the blood. But, Burbacher had shown the ethyl mercury was not being excreted from the body as Offit implied during our telephone conversation. Instead, it was going directly into the brain, where it rapidly metabolized into highly toxic inorganic mercury, and then lodged there, creating inflammation and brain damage. Burbacher had shown that inorganic mercury remains in the brain for years. Instead of being evidence of its safety, as Offit represented, ethyl mercury’s penchant for disappearing quickly from the blood was testimony to its extreme peril; it was disappearing due to the ease with which it crossed the blood-brain barrier! Ethyl mercury used in vaccines was both far more persistent and far more toxic than the methyl mercury found in fish. The Guzzi study, in 2012, showed the ethyl mercury was 50 times as toxic to cells. When I mentioned the Burbacher study to Stratton and Offit, they both went silent. It was obvious that they were aware of the study. THEY BOTH KNEW that science had refuted what they were telling me. They were accustomed to talking to journalists who seem to have an allergy to reading science and were content to parrot their reassurances.

RS: What did Offit say when you confronted him?

RFK: Well, he clearly knew that he was lying and now he knew that I knew he was lying. There was a long awkward pause. Then he had this kind of Porky Pig “Epity, epity, epity, what?” moment after which, he launched into what is now, to me, a familiar Paul Offit soft shoe routine. He said, “Well, you’re right, Robert, there is no definitive study. It’s really a whole mosaic of studies…”. And then, he had to go.”