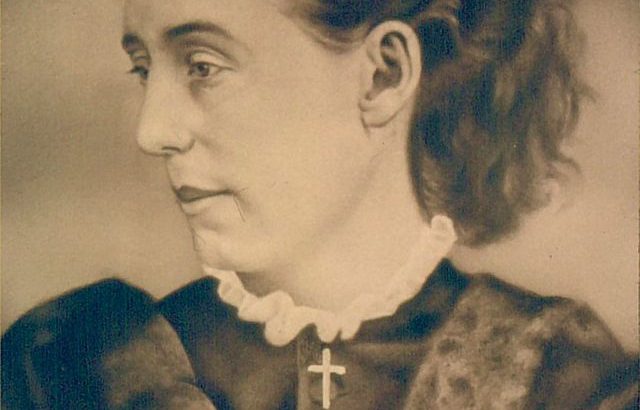 “If I should die and leave you here a while,
be not like others sore undone, who keep
long vigils by the silent dust, and weep.
For my sake – turn again to life and smile,
nerving thy heart and trembling hand to do
something to comfort weaker hearts than thine.
Complete these dear unfinished tasks of mine
and I, perchance may therein comfort you.”

But she was much more.

She was also a Lawyer, suffragist and philanthropist.

“Mary Hall was born in Marlborough, Connecticut, one of seven children of Gustavus E. Hall and Louisa (Skinner) Hall. Gustavus Hall was a prosperous farmer and miller, known to be one of liberal convictions. Hall graduated from Wesleyan Academy in Wilbraham, Massachusetts, in 1866. She was an accomplished poet, winning a medal for her commencement poem and having her poems published in newspapers. Hall then went on to teach mathematics at the LaSalle Seminary near Boston, where she became the Chair of Mathematics.[2]

In 1877, Hall decided to pursue the study of law. She approached her brother, Ezra, who was already an attorney and Connecticut State Senator, about her decision. Although he gave her no encouragement, upon her insistence, he gave her a copy of difficult legal work. After watching her study the work with great enthusiasm, Ezra decided to allow Hall to apprenticein his office. However, Ezra died a few months later in April 1878. John Hooker, the Clerk of the Supreme Court of Errors, took Hall in as his apprentice, beginning on April 2, 1879. That year, Belva Lockwood became the first woman admitted to argue before the U.S. Supreme Court. Hall studied law and copied and prepared judicial opinions under Hooker’s supervision and instruction for over three years.

On April 2, 1880, while studying law, Hall founded the Good Will Club, a charity for underprivileged boys, particularly newspaper boys. The program provided education as well as vocational training. The Club began with nine boys, but eventually grew to 3.000 boys, with its own facilities and newspaper called “The Good Will Star.” Despite her eventual practice of law, the Club was “Mary Hall’s first priority, and her life’s work.””

She was buried at Marlborough, Hartford County, Connecticut, USA.