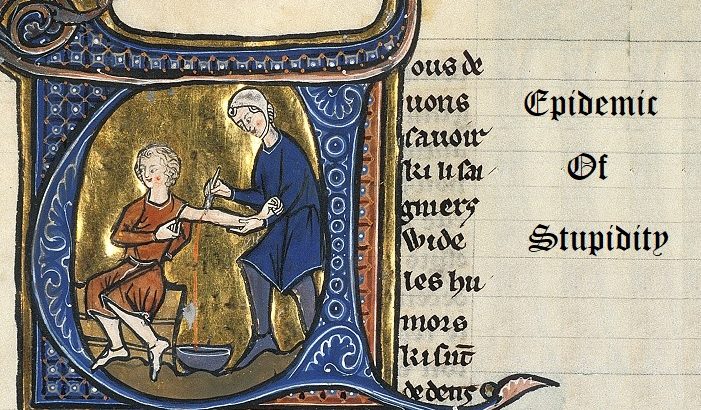 “Mercury in Vaccines – 10 Lies About The Safety of Thimerosal”

“Lie # 1 “Thimerosal, 49.55% mercury by weight, is safe when used as a preservative in vaccines and other drugs.”

The Facts: The Eli Lilly Material Safety Data Sheet (MSDS) for Thimerosal acknowledges that exposure to Thimerosal in utero and in children can cause “mild to severe mental retardation and mild to severe gross motor impairment.” The Sigma Aldrich MSDS lists abortion and fetal death as possible outcomes of in utero exposure.

Nonetheless, most seasonal and H1N1 flu shots for pregnant women and young children contain 25 micrograms of mercury in the form of Thimerosal. For this exposure to be safe, a child would need to weigh more than 550 pounds.

Thimerosal is a poison, neurotoxin, cancer-causer, and can interrupt the immune system and the normal development of an unborn baby or a child. Thimerosal is so toxic that putting it on your skin is illegal. However, the government not only allows but also defends its injection into the population, especially pregnant women and newborn children, as part of influenza vaccines currently recommended by the US Centers for Disease Control and Prevention (CDC).

Lie #2 “Mercury was removed from all childhood vaccines in (pick any year between 1999 and the present).”

The Facts: After “realizing” the amount of mercury in the childhood vaccination schedule recommended by the CDC exceeded all national and global maximum safety limits, the American Academy of Pediatrics and the United States Public Health Service called for the immediate removal of Thimerosal from all vaccines on July 7, 1999.

By 2003, the vaccine manufacturers had begun to react to the 1999 call by lowering the mercury content in many of the Thimerosal-preserved early childhood vaccines. However, in April of 2002, the CDC began recommending that pregnant women and very young children get annual Thimerosal-preserved flu shots. The result was a ‘shell game’ which has caused widespread confusion in the public because of press reports declaring, “Since (select a year between 1999 and the present), mercury has been removed from all recommended vaccines for children except for some flu shots.”

Currently, the actions taken by the vaccine manufacturers, the FDA and the CDC have increased the possible maximum childhood exposure to mercury from vaccines to twice the level that triggered the 1999 call to remove mercury from all vaccines as soon as possible! Also, new vaccine formulations with 25 micrograms of mercury per 0.5-mL dose are still being approved by the FDA for administration to pregnant women and children.

**Most doses of these flu vaccines are Thimerosal-preserved.

Lie #3 “Thimerosal is well-tested, having been used for 70 years with no problems.”

The Facts: Thimerosal has never undergone even one modern safety test. It was developed in 1927 and patented by Eli Lilly in 1928. It was first tested on small animals and killed a variety of mice, rabbits and chicks. After the animals died from exposure to Thimerosal, the decision was made to administer it to 22 patients suffering from bacterial meningitis during an epidemic in Indianapolis, Indiana in 1929.

The first protest on record against this highly toxic mercury compound was made in 1935 by the Pittman Moore Company which declared that, after testing, it found Thimerosal “was unsuitable as a preservative in serum intended for use in dogs…”

The FDA, passive with regard to safety testing, has never provided the results of appropriate toxicological tests on Thimerosal. Factually, the vaccine makers who use Thimerosal as a preservative are required by law to conduct and submit the results of such safety tests to the FDA before the FDA can legally approve a vaccine. Yet, the FDA has yet to produce even one of these vaccine maker’s toxicity studies, demonstrating Thimerosal safe for administration to humans, despite the fact that these documents have been sought in a court of law.

Lie #4 “No published peer-reviewed studies have shown any harm from Thimerosal.”

The Facts: The published scientific literature about Thimerosal can be divided into two distinct sets with opposite conclusions regarding its toxicity.

The first set is comprised of studies directly or indirectly supported by the pharmaceutical industry, showing that “there is no evidence of harm” from Thimerosal. These studies are the ones most often quoted by the Press. Most of these studies are statistical. In many cases, the data from which their conclusions are derived have been ‘lost’ or are unavailable or inconsistent. Significantly, the 2004 Institute of Medicine Vaccine Safety Review Committee, which defended Thimerosal, relied upon such statistical studies rather than the clinical evidence that the committee received.

The second set is comprised of hundreds of independent clinical and statistical studies demonstrating harm from Thimerosal. These studies are seldom quoted by the Press. Authors of these scientific papers include chemists, biologists, physicians and neurologists among others. Federal grants have often funded these studies. However, in many instances, when a researcher has concluded that Thimerosal causes harm, the grant has been withdrawn or ended. In one case, this happened after a researcher found an “autistic-like” condition in developing mice given injected mercury exposures like those human babies received from the CDC’s 1990’s immunization schedule. Independent researchers have lost jobs, been ostracized by peers, and/or had their medical licenses threatened, all because they dared to declare Thimerosal dangerous.

Offered for your consideration:

Lie #5 “No federal statements indicate any cause for concern regarding the continuing use of Thimerosal.”

The Facts: The following critical federal statements testify to the likelihood of egregious conflict of interest and possible collusive activity with regard to the acceptance of Thimerosal by manufacturers, the FDA and the CDC:

After a three-year investigation, a Congressional report released May 2003 by the staff of the Subcommittee on Human Rights and Wellness, Committee on Government Reform, “Mercury in Medicine” Hearings of the United States House of Representatives stated:

“Thimerosal used as a preservative in vaccines is likely related to the autism epidemic. This epidemic in all probability may have been prevented or curtailed had the FDA not been asleep at the switch regarding the lack of safety data regarding injected thimerosal and the sharp rise of infant exposure to this known neurotoxin. Our public health agencies’ failure to act is indicative of institutional malfeasance for self-protection and misplaced protectionism of the pharmaceutical industry.”

“I hasten to add, however, that based on the publicly available information…it appears there may be sufficient evidence to find a substantial likelihood of a substantial and specific danger to the public health caused by the use of thimerosal/mercury in vaccines because of its inherent toxicity.”

“FDA: Criminal negligence in not instituting a Class I recall of all vaccines administered to infants containing Thimerosal in July of 1999 and again in June of 2000…”