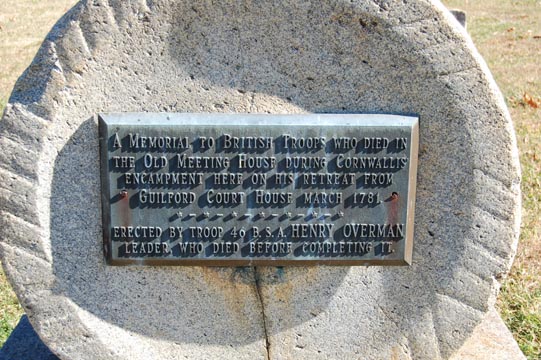 “The march of the British field army under Lord Charles Cornwallis down the Cape Fear River valley in
the closing days of March and early April, 1781 is usually treated as a mere afterthought in historical
treatises of the North Carolina Campaign of 1781 – euphemistically called the “Race to the Dan.” Very
little is known about the British retreat through central North Carolina after the climactic and
disastrous Battle of Guilford Courthouse on 15 March, 1781. The British general’s stubborn fixation
on the destruction of Major General Nathanael Greene’s Southern Field Army at any cost was an abject
failure. Lord Cornwallis found himself in a most difficult position. He was in the middle of a
wilderness that had been bled white by the depravations of the two armies and numerous independent
guerrilla corps. His field army could no longer continue the strategic offensive against the rebel
American army, and was ragged and close to starvation with numerous wounded encumbering his speed of
maneuver.

After the big battle in central Guilford County, Lord Cornwallis moved almost due south, feinting
towards Cheraw Hills and his principal post at Camden, South Carolina, or even Cross Creek (modern
Fayetteville, N.C.). He made a brief stop at Bell’s Mill (essentially Randolph County Courthouse)
on Deep River, then cut cross country across Greene’s intended line-of-march by moving his ragged
army northeast towards Hillsborough in the heartland and Halifax on the Roanoke River. This strange
maneuver might be seen as a ploy that would enable Cornwallis to open communications with the British
garrison at Portsmouth, Virginia, under Major General William Phillips. The ruse did not work as
Cornwallis intended because Greene was held up near South Buffalo Creek, southeast of Guilford Courthouse,
awaiting vital ammunition stores and draught horses. He couldn’t move anywhere while Cornwallis was
calmly marching across his front. The British encamped at Dixon’s Mill on Cane Creek, then at Colonel
John Pyle’s Plantation, both in southern Alamance County. A wonderful opportunity to bring the weakened
British army to battle was thus lost.

On 25 March, Cornwallis suddenly abandoned his sly maneuvering and at last swung his army towards
what must have been his original goals, Cross Creek and Wilmington, that both lay on the Cape Fear River.”

“A memorial to British Troops who died in the old Meeting House during Cornwallis’ encampment here on his retreat from Guilford Court House March 1781.”

The Battle of Guilford Courthouse significance.

“The importance of the Battle of Guilford Courthouse lies not in the battle itself, nor in the numbers involved, the tactics employed, nor in the casualties inflicted upon either side. Rather its importance is in the effects which flowed from it, and in the fact that in winning, Cornwallis was the ultimate loser.

Thus Guilford Courthouse is important in the immediate result of rendering North Carolina safe and in the larger result of freeing Greene’s hands for reconquest to the southward. Broken was the grand British plan of campaign which would have detached the Southern Colonies from the Colonies to the north. Cornwallis was driven into Virginia without making secure his rear. Greene had lost a battle but won a campaign.”