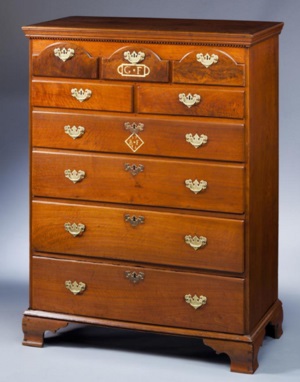 From the Chipstone Foundation.

“The craftsmen most likely to have made the Cane Creek furniture are Joseph Wells Jr. (1729–1804) and male members of his immediate family. He owned a sawmill approximately one mile west of Cane Creek Meeting House, and his 1804 estate inventory listed various sorts of lumber, a glue pot, a horse shave, “one peace of brass,” a workbench, a “Case of Drawers part made,” and “joiner’s tools.” Among the tools were seventeen planes, three handsaws, two gouges, two pairs of compasses, a turning lathe, three hammers, a cutting box, two axes, a drawing knife, a miter box, seven files, three bits, a square, a joiner’s screw, a vice, a jointer, a chisel, a hatchet, and a compass saw. Wells also had more furniture than typically found in the inventories of other Cane Creek residents: a desk, two chests of drawers, four chests, an oval table, a looking glass, a knife box, a “box and bottles,” one armchair, seven side chairs, and one eight-day clock valued at £7.10.7, an unusually high amount.[23]

Wells was reputed to have been born in Chester County, Pennsylvania, but moved south with his family to Prince George’s County, Maryland, by 1743. His parents were Joseph Wells Sr. (1697–ca. 1752) and Margaret Swanson Wells (1693–ca. 1752). They called their Maryland tract Boiling Springs, and they were active members of Monocacy Meeting while living there. By 1746 Joseph and Margaret had become members of Fairfax Monthly Meeting in Loudoun County, Virginia, and it was here that Joseph Jr. married Charity Carrington (ca. 1730–1803) in 1750. Joseph Jr. and his new bride arrived at the Cane Creek Settlement a month later, placing them among the earliest settlers in the region. They were charter members of Cane Creek Meeting when it was established in 1751 and appear in the meeting minutes until their deaths. Over the next fifty years, Joseph and Charity acquired hundreds of acres along Cane Creek and its tributaries. One of those tracts was purchased in 1799 from Thomas Dixon, the clockmaker. The couple raised five daughters and six sons, and documentary evidence suggests that their boys Jesse (1762–1794) and William (1766–1851) were also woodworkers. When Jesse died in 1794, his estate inventory included “sundrie Joyners tools,” a table frame, and a workbench. In his will, Joseph Wells Jr. left William “all my tracts of land on both sides of Cane Creek, and my part of the [saw]mill seat and water courses.” In addition, at his father’s estate sale, William purchased more of his father’s woodworking tools than any other person. Joseph’s sons Isaac, John, and Nathan, and Joseph’s son-in-law James McDaniel also purchased enough tools to suggest that they, too, were probably involved in the family woodworking business.[24]

The Wells family’s connections to owners of furniture in the Cane Creek group support the theory that Joseph Jr. and his sons were the principal makers. The first piece of property George Foust, the owner of the chest illustrated in figure 21, bought in 1778 was contiguous to Joseph Wells’s property, leading one to assume that Joseph, his wife, and the Fousts raised their families in the same neighborhood. George Foust’s youngest brothers, Peter and Daniel, were also acquainted with Wells and purchased items from his estate sale in 1804. Joshua and Ruth Hadley, the owners of the jH high chest (fig. 28), were early members of Cane Creek Meeting, along with Joseph and Charity Wells, and lived about three miles from them. John and Rachel Allen, owners of the ET chest, attended the Cane Creek Monthly Meeting during the same period and lived less than two miles from the Wells family. In 1781 Allen sold Joseph Wells 2 1/2 bushels of rye and credited him for “170 feet of oak Boards . . . and 150 feet of poplar.” Given the limited number of furniture makers in the area, no other members of the Cane Creek Settlement emerge as better candidates for the makers of this early furniture than Joseph Wells Jr. and the male members of his family.[25]”

“Jeremiah Sr. also requested that his executors “bind out my sons to trade if it can be come at among friends [Quakers].” Joseph Wells Jr. and his sons are the craftsmen most likely to have trained Jeremiah Jr. Wells and Jeremiah Piggott Sr. were both early members of Cane Creek Meeting, and in 1764 the two men, along with Piggott’s brother William, served as executors of the estate of Quaker Joel Brooks, who requested their aid in freeing his “Negro Major.” John Piggott, who was responsible for arranging Jeremiah Jr.’s apprenticeship, owned land adjoining that of Joseph Wells Jr. in 1794 and 1799. Jeremiah Piggott Jr. purchased “sundrie Joiner’s tools” at the 1794 estate sale of Joseph Wells Jr.’s son Jesse. Almost all of the other buyers were the sons and sons-in-law of Joseph Wells Jr. Jeremiah Jr. would have been twenty-one in 1794, close to completing his apprenticeship and possibly working as a journeyman in a Wells shop. In 1800 he married Sarah Hadley (1762–1827), whose parents Joshua and Ruth owned the jH high chest (fig. 28). Jeremiah Jr. was listed as a resident of Chatham County in the 1800 census and by then was probably operating his own cabinetmaking establishment. Four years later, he purchased one plane, six files, and some plank at Joseph Wells Jr.’s estate sale.[33]

The chests and dish dresser illustrated in figures 49, 52, and 55 could have been made in either a Wells or a Piggott shop, and Jeremiah Jr. must be considered as a possible maker of the 1802 high chest (fig. 31). His 1825 estate sale listed “brimstone,” the period term for sulfur.

Assigning later Cane Creek furniture to specific shops is problematic because Jeremiah Piggott Jr. likely trained with Joseph Wells Jr., and at least one journeyman—Joshua Buckingham—may have been involved in the production of furniture in both the Wells and Piggott shops. Joseph Buckingham (ca. 1726–1795), who had been a member of Newark Monthly Meeting in Pennsylvania, married Margery Piggott, Jeremiah Jr.’s aunt, at Cane Creek in 1754. Other members of Buckingham’s family also went to North Carolina. His nephew Joshua (1769–1853) was received into Cane Creek Monthly Meeting on certificate from Wilmington Monthly Meeting, Dela­ware, in 1792, and married Rachel Piggott, sister of Jeremiah Piggott Jr., in 1793. Joshua’s father, James, was a joiner whose will was probated in New Castle County, Delaware, that same year. Unfortunately, no furniture made by James Buckingham is known, but it appears that his son followed him in the cabinetmaking trade. Joshua purchased a glue pot at Joseph Wells Jr.’s estate sale. Joshua’s family was listed in the 1820 Orange County census, and one member in the household was identified as being engaged in manufactures. The latter was probably Joshua, since the only other male in the household was fifteen years old or younger. In 1823 Joshua Buckingham and his family moved to Indiana, where Rachel and the children received a certificate to Lick Creek Monthly Meeting. He died in Indiana in 1853, and his estate sale included a variety of woodworking tools—chisels, handsaws, a circular saw, jointers, planes—and a glue pot, possibly the same one he purchased from Joseph Wells Jr.’s estate sale.[35]

When Joshua Buckingham joined the Cane Creek Settlement in 1792, he was twenty-three years old and presumably already trained by his father. Exactly how this newcomer interacted with and influenced the Wells and Piggott shops can only be speculated. When Buckingham first arrived, he probably worked with Joseph Wells and his sons, along with his future brother-in-law, who, at the time, would have been serving his apprenticeship in the Wells shop. With his more urban training, he could have influenced the design and construction of the clock illustrated in figure 15. Its shaped base panel, shaped waist door, and disengaged hood columns make it the most sophisticated of all the clocks to have survived from the region. He also might have had a hand in designing and making the dish dresser (fig. 55). It is so reminiscent of Pennsylvania examples that for many years it was considered to be from that state by the museum that owns it.”