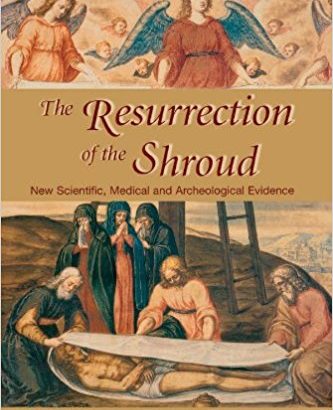 From the preface to The Resurrection of the Shroud by Mark Antonacci.

“It actually began out of nowhere on a Sunday afternoon. I had just had a serious argument with a girlfriend. The problem was that she was religious, and I was not. She was very committed to her religious views, and I was definitely a committed agnostic. Because it was over a matter that threatened our relationship, it caused me great anxiety. Not wanting to hang around the apartment and continue to think about it all day, I decided to go to work at my law office to take my mind off the argument.

When I got to my office, I couldn’t concetrate on my work. Hoping to get my mind off the disagreement, I decided to go across the street and catch some lunch at Hummel’s, my favorite restaurant, and read the paper. On the way I happened to buy a particular newspaper for the only time in my life.

As I was moving down the serving line at Hummel’s with the newspaper on my tray, I couldn’t help but notice the words across the top of the paper, advertising what was inside the weekend edition. In the upper right-hand corner was a facial picture of the man on the shroud; next to it, a caption asked if this was a picture of the historical Jesus Christ. The paper was featuring an article on a recently published book about the Shroud of Turin. The picture was staring up right at me, and as I went down the line, I muttered to myself, “Great, this is just what I need.”

“I did not like seeing this picture and being reminded of the subject and the argument, so I pushed the paper a little bit away from me. As I continued reading, I noticed the picture again and pushed the paper farther away still. I did the same thing another time until, noticing the picture yet again, I finally said, “all right, I’ll read the !$#?% article,” and angrily threw down the sports page and picked up the article on the shroud.”