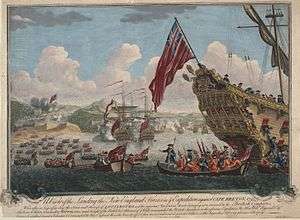 “When a Kittery Point, ME man moved into his great aunt’s house he discovered an unusual wooden telescope.  No one in his family knows where it came from or how long it’s been in the family.

Even though his family is full of Navy men, our contributor hopes it belonged to his ancestor William Bray, who served on the Raleigh, one of America’s first naval war ships during the American Revolution. ”

The telescope was likely used by another ancestor, Sir William Pepperell, and used in the Siege of Louisbourg 1745.

The Siege of Louisbourg took place in 1745 when a New Englandcolonial force aided by a British fleet captured Louisbourg, the capital of the French province of Île-Royale (present-day Cape Breton Island) during the War of the Austrian Succession, known as King George’s War in the British colonies.

Louisbourg was a standing menace to all the Northern British colonies. It was such a haunt of privateers that it was called the American Dunkirk. It commanded the chief entrance of Canada, and threatened to ruin the fisheries, which were nearly as vital to New England as was the fur-trade to New France. The French government had spent twenty-five years in fortifying it, and the cost of its powerful defences…was reckoned at thirty million livres.[2]“

“In 1745, the governor of the Province of Massachusetts Bay, William Shirley, secured by a narrow margin the support of the Massachusetts legislature for an attack on the fortress. He and the governor of the Province of New Hampshire, Benning Wentworth, sought the support of other colonies. Connecticut provided 500 troops, New Hampshire 450, Rhode Island a ship, New York ten cannons, and Pennsylvania and New Jersey funds.[6] The force was under the command of William Pepperrellof Kittery (in the portion of the Massachusetts colony that is now the state of Maine), and a fleet of colonial ships was assembled and placed under the command of Captain Edward Tyng. Governor Shirley sent to Commodore Peter Warren, the chief officer of the Royal Navy‘s West Indies station, a request for naval support in the event of an encounter with French warships, which would significantly outclass any of the colonial ships. Warren at first declined this offer, lacking authorization from London to assist. Only a few days later, he received orders from the Admiralty to proceed to protect the New England fisheries. The expedition set sail from Boston in stages beginning in early March 1745 with 4,200 soldiers and sailors aboard a total of 90 ships.

The force, beginning to take on the air of a religious crusade, stopped at Canso to reprovision. There they were met by Commodore Warren, enlarging the expedition by 16 ships. In late March, the naval forces began to blockade Louisbourg, however ice fields were being swept from the Gulf of St. Lawrence to the seas off Louisbourg that spring, presenting a considerable hazard to wooden-hulled sailing ships. The poor weather and general state of disorganization of the New England naval forces resulted in numerous delays to the expedition, however, they kept busy harassing French fishing and shipping in the waters surrounding Île-Royale.

With the ice fields gone by late April, the siege began in earnest. Pepperell’s land forces sailed in transports from Canso. On May 2, he besieged Port Toulouse (present-day St. Peter’s, Nova Scotia) as well as destroying several coastal villages in the area between Canso and Louisbourg. The New England force then landed on May 11 8 kilometres (5.0 mi) southwest of Louisbourg at Gabarus Bay in a flanking manoeuvre and proceeded overland with their cannon on sleds designed by Lieutenant Colonel Nathaniel Meserve of the New Hampshire Militia, who was a shipwright by trade, to the series of low hills overlooking the western walls of the fortress.[7]

Except for a small party led by Pierre Morpain, the fortress’ naval commander, the landing on May 11 of the New England colonial forces and advance on the fortress went unopposed. The French were not helped by the fact that the government in Paris had advance knowledge of the New Englanders’ intentions to attack, but the decision was made not to augment defences or send reinforcements. The French defenders were seriously outmanned, and Duchambon’s distrust of his troops and fears that they would desert led him to keep his soldiers within the walls of the fortress rather than confronting the colonial forces at the landing site. The French defenders of the strategically important Island Battery successfully stopped several assaults, inflicting heavy losses on the New England troops. However, the New Englanders eventually established gun batteries at Lighthouse Point that commanded the island, leading to its abandonment by its defenders.

On June 15, French and native reinforcements led by Paul Marin were prevented from reaching Louisbourg in the Naval battle off Tatamagouche.[8] The New Englanders’ landward siege was supported by Commodore Warren’s fleet and, following 47 days (six weeks and five days) of siege and bombardment, the French capitulated on June 28, 1745. News of the victory reached Governor Shirley in Boston on July 3 which, coincidentally, was commencement day at Harvard (usually a day of celebration in itself). All of New England celebrated the taking of France’s mighty fortress on the Atlantic.”