Martin Luther Christ centric approach to ethics, Ethics as the Gift of the Lord, Ethics in each Christian’s callings is where the Lord has his way in the world 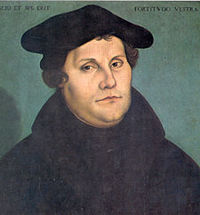 Martin Luther Christ centric approach to ethics, Ethics as the Gift of the Lord, Ethics in each Christian’s callings is where the Lord has his way in the world

From the Journal of Lutheran Theology.

“Since all humans, even those who are baptized, regard themselves as the center of the world, then for even the baptized to assume that they have control over how to use the law of God to walk a God-pleasing life is at best an illusion. Luther knew that Satan can use the best efforts of Christians to destroy them, just as he can accuse them for their unethical behaviors. Before men, Christians are measured by their performance, but coram Deo it must be confessed that outward service to the neighbor may be mingled with inward desire for human recognition and enhancement of personal status.

Luther’s placement of ethics under the Second Article, and his confession of ethics together with the doctrines of free will and original sin, indicate that he sees the life of the baptized against the serious backdrop of the sinful flesh, the world, and the devil. Luther never loses sight of the Christian’s sinful condition,11 so the forgiveness that Christ won on Calvary for Christians and delivers to them in the means of grace is never diminished to the sideline. Forgiveness is never taken for granted when Luther confesses Christian vocation.

“Ethics and the Proper Distinction between Law and Gospel

Such a recognition leads one to confess that ethics is bound together with the doctrine of the proper distinction between law and gospel. Luther in his Great Galatians Lectures (1531) observed that since the devil ceaselessly attempts to take away the pure doctrine of faith and substitute for it the doctrine of works and human tradition, the doctrine of law and gospel can never be discussed and taught enough. In a Christian’s life, he says, the gospel is “a rare guest” but the law is “a constant guest” in the conscience”

“The proper office of the law is to kill (WA 40 I: 517, 26; AE 26: 335).14 It makes people guilty and humbles them, leading them down to hell (WA 40 I: 529, 11-12; AE 26: 345).15 When the law has done its job, every mouth is stopped and silenced before God. There is nothing more one can say to him. The law strikes people dumb. While the law does not make a sinner, it seeks the sinner, and without fail it finds, judges, and kills the sinner it seeks.16 It strips the self-righteous, self-excusing sinner of every credential and covering. One’s possibility of having a ground of confidence located within has been wiped out by the law. The Lord would destroy in humans everything that blocks him off from them. In his Lecture on Psalm 51 Luther pointed out: “A lawyer speaks of man as an owner and master of property, and a physician speaks of man as healthy or sick. But a theologian discusses man as a SINNER (PECCATORE)” (WA 40 II: 327, 19-21; AE 12: 310; emphasis mine, reflecting the Latin).17″

“Gifted by him, Christ’s holy people live their lives enveloped in Christ’s gifts and forgiveness, serving their neighbor in word and deed. Yet there are always temptations in the world that seek to diminish Jesus. Luther warns, “Therefore Satan continually mounts a new battle against us” (WA 40 I: 318, 12; AE 26: 193).23 The devil “often suggests a false Christ to me” (WA 40 I: 321, 32-33; AE 26: 196).24 Since Christians are powerless before Satan, their daily life of vocation is a daily return to baptism.

Luther presents the life of Christians in their daily callings as a life that is lived within the forgiveness of sins. Ethics may not be detached from the body and blood of Jesus that the baptized receive. This is where the forgiveness is bestowed (WA 18: 203, 39-204, 9; AE 40: 214). Bodied together and blooded together, the communicants are enlivened to serve one another in word and deed, not only in the church but in the world.”

“Ethics as the Gift of the Lord”

“For Luther, ethics is a means of grace doctrine, because only when the Lord’s gifts that are given are received does his blessing then move Christians out into their callings, where his gifts have their fruition. The placement of ethics under the Second Article in the Large Confession (1528) provides an occasion for recalling that the One who delivers the forgiveness from Calvary to enliven Christians is Jesus Himself. Ethics in each Christian’s callings is the arena where the Lord has his way with his people in the world.”