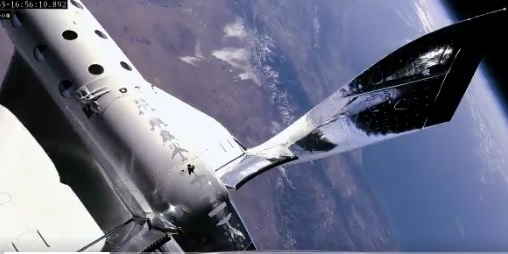 Space tourism took a giant leap forward on Friday as Virgin Galactic sent its first passenger to the edge of space. Beth Moses, the company’s chief astronaut instructor, became the first non-pilot to ever achieve the feat.

According to NASA and US military standards, which say space begins at a 50-mile (80.5km) altitude, the craft entered space and the three-person crew became the 569th to 571st people to cross that frontier. The flight reached a height of 55.8 miles (89.9 km).

It was Virgin’s fifth supersonic, rocket-powered test flight and the second time the Richard-Branson-owned company has reached the landmark height.

Moses also achieved the accolade of becoming the first woman to do so on a commercial spaceflight. During the trip, she floated around the cabin to carry out a number of evaluation test points.

Hello, Earth 🌎. Footage from the boom of SpaceShipTwo pic.twitter.com/i6jdsjrRRB