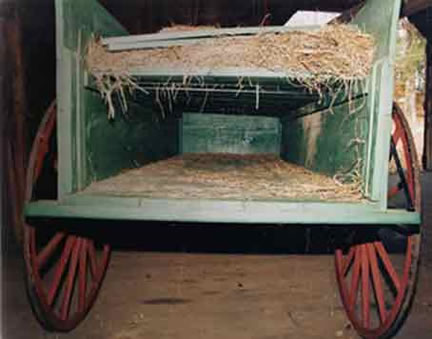 “This wagon has been preserved through the interest and good offices of five successive generations in the Centre community, three of which lived in the same “Stanley Homeplace.” The wagon has now come to the Historic Jamestown Society as a gift from Joshua Edgar Murrow, deceased in 1980, and his wife, Hazel Richardson Murrow, and their three children, Joshua Edgar Murrow, Jr., of Lawndale, N. C; Mary Murrow Hamilton of Atlanta, Ga., and Gertrude Murrow Sillman of Greensboro, N. C.

The Underground Railroad was a system for helping black slaves to escape to the northern states and to Canada. It was called “underground” because fleeing slaves who seemed to mysteriously disappear from sight were in fact hiding in the homes of people who were opposed to slavery.

The Underground Railroad was active in the years before the Civil War, especially from 1830 to 1860. Possibly as many as 50,000 slaves in the South were helped to escape to free territory beyond the Ohio River and often on into Canada.

Assisting runaway slaves was against the law and so it was done with as much secrecy as possible and no records of any kind were kept for fear they might serve as incriminating evidence. A new vocabulary was developed to conceal operations and protect individuals. Cooperating homes in the network were called “stations,” the vehicles were called “trains,” the drivers were known as “conductors,” the fugitives were referred to as “baggage” or “cargo.” The movement of “passengers” was mostly at night; they traveled in small groups numbering from two or three to seldom more than a dozen. Movement was slow. The “stations” were ten to twenty miles apart and transportation was mainly by horseback, in carriages or wagons, and often on foot.

Fugitive slave laws provided severe penalties of stiff fines and imprisonment. (See Fugitive Slave Law of 1797.) To interfere with the recovery of an owner’s slaves was considered a serious crime. But many Quakers and some members of other religious groups preferred to live by the words of the Bible: “Thou shalt not deliver unto his master the servant which is escaped from his master unto thee.” (Deuteronomy 23:15) To these abolitionists and others, the laws of God superseded the laws of man.

In North Carolina, one of the leaders in giving assistance to fugitive slaves was Levi Coffin, Jr. (1798-1877). Levi was born at New Garden, now Guilford College. As a boy he saw numerous occasions when slaves were badly abused.’ He resolved that when he grew up he was going to do something about these matters. As he grew through the adolescent years he became acquainted with a young Quaker girl, Catherine White of Randolph County, who shared his convictions regarding slavery. They were married in 1824. During their courtship and early years of marriage they felt ever more strongly that the Lord was calling them to some special service on behalf of the slaves but they were still unclear in their minds as to where and just how they could help. However, since both sets of parents and their brothers and sisters had now moved to Indiana along with many other relatives and friends, they felt that their futures lay there. Early in the autumn of 1826, they, with their year-old son, packed all their household belongings on a wagon and headed for the West.”