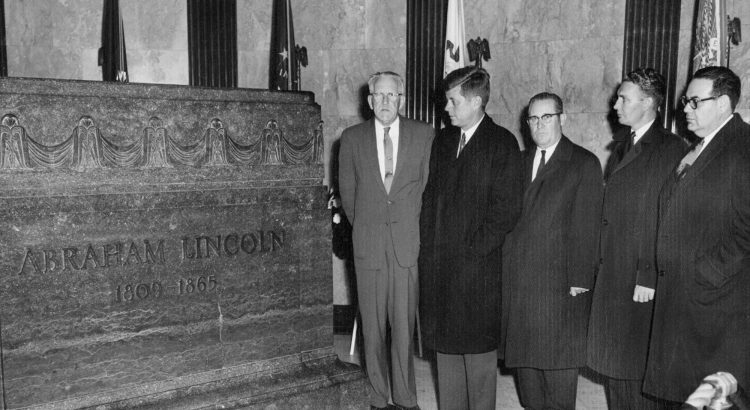 “The Assassination That Could Have Sparked WWIII: WaPo”

“While paying a visit to the tomb of Abraham Lincoln, in Springfield, Ill., at the height of the Cuban missile crisis on Oct. 19, 1962, a gunman had Kennedy in his telescopic sight as he was riding in a slow-moving open limousine. The scenario was eerily similar to what occurred in Dallas the following year, but for whatever reason, the Springfield gunman held his fire, sparing the nation and the world a potential assassination.

Kennedy was in Springfield to campaign for Democrats running for House and Senate seats in the 1962 midterm elections. Before delivering a public speech at the Illinois State Fairgrounds, the president paid a private visit to Lincoln’s tomb. On his way to the tomb, an “employee of the Illinois Department of Public Safety” noticed two men along the president’s motorcade route with a rifle.

According to the Secret Service report, the alert public safety official “saw a rifle barrel with telescopic sight protruding from a second-story window. The local police took into custody and delivered to Special Agents of the Secret Service” two men who were brothers-in-law.

The Secret Service noted that “a .22 caliber semi-automatic rifle and a full box of .22 long rifle ammunition was seized.”

The men admitted “pointing the gun out the window on the parade route. However, they claimed that they had merely been testing the power of the telescopic sight to determine if it would be worthwhile to remove it in order to get a better look at the President when the motorcade returned.

As there was no evidence to the contrary, and neither man had any previous record, prosecution was declined.”

From the State Journal-Register.

“Both Douglas and Bradley realized that Kennedy had what it takes.

“Douglas told Dad, ‘I want you to meet him because he’s special, and I think he’ll be the next president of the United States.’ Dad thought he was special, too,” Casey said.

But before he ascended to the world stage, Kennedy would visit Springfield to learn about issues affecting farmers. It was the first of a handful of visits to Illinois’ capital city before his assassination 50 years ago.

“Kennedy didn’t know anything about farm issues in those days,” Casey said. “Dad invited him to Illinois to meet our farmers. He said he’d show him around, and they went to Wisconsin and other states.”

Bradley called a Midwest Farm Conference and invited Kennedy to be the main speaker. The speech was set for Oct. 24, 1959.

Bradley contacted state Democratic Party officials, “but they wouldn’t touch Kennedy with a 10-foot pole,” Bradley’s daughter recalled. “They were nervous about Kennedy being a Catholic and most of them were for (Adlai) Stevenson.

“It was snowing, and he had to fly into, I assume, Meigs Field instead of O’Hare,” Casey said. “We met him in Sherman and brought a motorcade down to the St. Nicholas Hotel.”

It was there that Casey — then known as Maggie Bradley — had her picture taken with Kennedy. Don Forsyth, Sangamon County Democratic chairman, also is in the picture.

“Dad adored him and he treated Dad like a father,” Casey said.

Ralph Bradley took a leave of absence from the Illinois Farmers Union and became national chairman of Farmers for Kennedy.

“He worked out of his home and traveled, of course,” Casey said. “He helped write his speeches with Steve Smith and Ted Sorenson and Sargent Shriver. And he didn’t get paid, which made my mother furious.

“But the Kennedys never carried money with them,” Casey said. “It just never dawned on them to pay him.””

On both sides of his care, Brooks had JFK-LBJ (Lyndon B. Johnson, Kennedy’s vice presidential running mate) signs. He felt so strongly about Kennedy that he attended his inauguration in Washington in 1961.

Brooks was at the fairgrounds Coliseum again on Oct. 19, 1962, when now President Kennedy came to promote the candidacies of other Democrats, including U.S. Rep. Sidney Yates, who was running for the U.S. Senate against incumbent Everett Dirksen, and Peter Mack of Carlinville, who was running for re-election to the U.S. House against Paul Findley.

Kennedy’s visit was part of a swing through several Midwestern states and the west campaigning on behalf of Democratic congressional candidates.

About this same time, a U-2 spy plane had photographed construction sites in Cuba that would allow for the launch of medium-and intermediate-range missiles from the Communist island, located less than 100 miles from Florida.

The day before his Springfield speech, Kennedy and Soviet Foreign Minister Andrei Gromyko met for two hours in the Oval Office, where Gromyko told Kennedy that Soviet aid to Cuba was meant only for defense.

Presidential strategists thought having Kennedy stay on his normal schedule would create the impression there was no crisis. Kennedy rejected the urging of the Joint Chiefs of Staff to respond to the missile sites with a show of force.

But the day after he was at the Coliseum, the president’s press secretary announced that Kennedy suffered from an “upper respiratory infection” and abruptly canceled the rest of his Midwest trip.

“As the president was leaving the Coliseum in his convertible, I was at curbside and got to shake his hand as the motorcade was leaving,” Brooks said. “I went outside and waited on the curb. I leaned over and I got to shake hands with him. That was the last time I ever saw him alive.””