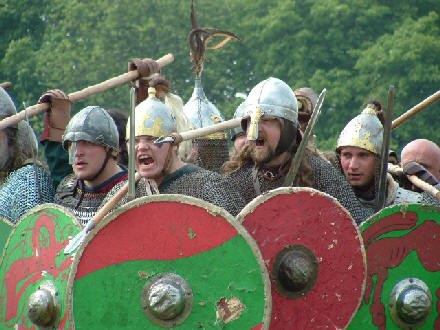 The Romans had been troubled by serious barbarian raids since around AD 360. Picts (northern Celts) from Scotland, Scots from Ireland (until AD1400 the word ‘Scot’ meant an Irishman) and Saxons from Germany, all came to plunder the accumulated wealth of Roman Britain. The Roman legions began to withdraw from Britain in AD383 to secure the Empire’s borders elsewhere in mainland Europe. By AD410 all Roman troops had been withdrawn, leaving the cities of Britain and the remaining Romano-British to fend for themselves.

As the Romans departed, so did the source of any major written historical data. For the rest of the fifth century and early sixth century, England entered what is now referred to as a period of time known as the Dark Ages.

A time of legend, a time perhaps of a great hero and war leader of the Britain’s – King Arthur. Possibly a Romano-Celtic leader defending his lands from the pagan Anglo-Saxon invaders? It was during these Dark Ages that the Anglo-Saxons became established in eastern Britain. The Romans had employed the mercenary services of the Saxons for hundreds of years, preferring to fight alongside them rather than against these fierce warriors. An arrangement, which probably worked well with the Roman military in place to control their numbers, using their mercenary services on an as required basis. Without the Romans in place at the ports of entry to issue visas and stamp passports however, immigration numbers appear to have got a little out of hand.

First Saxon warriors raided England’s south and east coasts. Little mercy was shown as men, women and children were slaughtered. A British monk Adomnan, suggested a Law of Innocents to protect the women and children. The Saxons appear to have rejected this strange and foreign concept! Following these early Saxon raids, from around AD430 a host of Germanic migrants arrived in east and southeast England. The main groups being Jutes from the Jutland peninsula (modern Denmark); Angles from Angeln in southwest Jutland and the Saxons from northwest Germany. Much fun and fighting followed over the next hundred years or so as the invading kings and their armies established their kingdoms. Most of these kingdoms survive to this day, and are perhaps better know as the English counties; Kent (Jutes), Sussex (south Saxons), Wessex (west Saxons), Middlesex (middle Saxons), East Anglia (east Angles)”

“From AD793 a new prayer could be heard at Matins across England, “Save us, Lord, from the fury of the Northmen!” The Northmen, or Vikings came from Scandinavia. Like the Saxons before them, the Viking onslaught first started with a few bloody raids. The first recorded raids include the sacking of the monasteries at Lindifarne, Jarrow, and Iona. A Micel Here (Great Army) of Heathen Danes landed in East Anglia in AD865. Within nine years the Vikings had attacked and established their rule, or Danelaw, over the kingdoms of Northumbria and East Anglia, their former Anglo-Saxon kings having been put to the sword. The Vikings also ravaged the once mighty East Mercia, driving King Burgred overseas.

Alfred (The Great) the Saxon king of Wessex (AD 871-99) recognised the opportunity to establish himself as Bretwalda. He added southeast Mercia as well as London and the Thames Valley to his territories and organised Anglo-Saxon resistance to the Viking onslaught. Between AD 912 and AD 954 Anglo-Saxon Wessex conquered Danelaw and the Viking Kingdom of York, exit one Mr Eric Bloodaxe, the last Viking king of York. For the first time, the England of both Vikings and Saxons was united as a country, under the rule of Athelson, grandson of Alfred.”

“Amongst many Norman visitors to Edwards’s court came the Duke of Normandy himself, a red haired man named William. It was during this visit in 1052 that Edward the Confessor is said to have promised the Crown of England to William.

On the 5th January 1066 Edward died. The Witan (a council of high ranking men), elected Harold Godwin, Earl of Wessex, to be the next king of England. Back at home in Normandy, William had some problems in coming to terms with this decision…”

Sourced from the book: Language Arts & Disciplines by David Crystal 2005.

“Whatever the reason, we can see the name broadening its meaning in the ninth century. The Old English translation of Bede uses (literally, ‘race of the Angles‘, Bede’s English makes its first appearance at that time, too – long predating the name England. In a treaty made between Alfred and the Dane Guthrum (c. 880) we see English opposed to Danish, and it plainly refers to all of the non-Danish population, not just the Angles. Also, at around the same time, English is used for the language: the translation of Bede at one point) talks about a monastery nemned on Englisc (‘called in English’) Cneoferisburh, and Alfred quite often uses the name in this way.

It took over a century before we find the phrase Engla lande referring to the whole country, by the writers of the eleventh- century Chronicle. There was then a long period of varied usage, and we find such forms as Engle land, Englene Ionde, Engle lond, Engelond, and Ingland. The spelling England emerged in the fourteenth century, and soon after became established as the norm.”