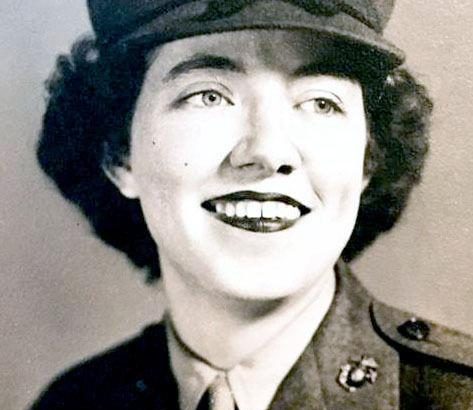 “The man noticed the U.S. Marines cap on Nina Wiglesworth-Morgan’s head as her daughter pushed her in a wheelchair through the medical office lobby.

“He came up and shook her hand, and he said, ‘Was her husband a Marine?” said daughter, Kathleen Perdue. “He just assumed that she had that Marine hat on for some man. I said, ‘My father was a Marine, and you’re looking at a Marine.’”

Others overhearing the conversation reached to shake the World War II veteran Nina Wiglesworth-Morgan’s hand and thank her for her service.

Wiglesworth-Morgan, among the first women to serve in the Marines and a Gold Star Mom, who lost a son in battle, died Saturday at the age of 95.

Like women and many men of her era, she did not see combat on the front lines but provided necessary support services for those fighting overseas. Later, she was the first female commander of the Henry K. Burtner American Legion Post 53 veterans’ group and one of the few women commanders in the country at the time.

She also lived on her own and drove around Greensboro into her 90s.

“I was so inspired by her,” said granddaughter Kelly Wiglesworth, who made a name for herself as the second runner-up for the first year of the “Survivor” reality show in which competitors must fend for themselves in a remote location. “I always felt that I got a lot of strength and spirit from her.””

“After signing up and boot camp at Parris Island, she was sent to Camp Lejeune on the North Carolina coast, where she trained and did clerical work at the Quartermaster Depot.

“I never really had any flack from anybody,’’ she told the News & Record in 1999. “I always felt I was doing my job, doing it alongside the men.’’

Later, she was assigned as a “supply man.”

“She had that ‘Don’t tell me what I can’t do because I can do it’ spirit,” said Jim Wiglesworth, a son. “It was lead or get out of the way.”

Wiglesworth-Morgan was promoted to corporal and recommended for Officer Candidate School. She turned it down.

That’s because, on the train carrying her to boot camp, she had met Ernest Wiglesworth, a GI who had already survived the attack on Pearl Harbor and the fight on Guadalcanal.

“I thought he was the best-looking man I’d ever seen,” she said in that 1999 News & Record interview. “He was so nice, and he carried my bag off the train, and I thought, ‘This is for me.’”

Ernest Wiglesworth, who would go on to the South Pacific for the Battle of Peleliu, mailed her an engagement ring six weeks later.

When they both got out of service, the Wigglesworths settled in the Guilford County area, where they raised six children. Nina worked as an executive secretary and office manager for several companies and later First Baptist Church. A child of the Depression, she made all the children’s outfits and even coats.

“She would come in from work in a dress, her string of pearls and heels, and she’d go put on an apron and go right into the kitchen,” Perdue said. “Now I look back and say, ‘How did she do all of that?’””

“Semper Fi Marine Nina Wiglesworth-Morgan passed away peacefully this week at the age of 95. She leaves behind a large and loving family. Nina was preceded in death by her husband of 54 years Ernest Woodrow Wiglesworth, Sr., her eldest son, Ernest Woodrow Wiglesworth, Jr., and her late husband Elda Ray Morgan. A mother of 6, she also leaves behind: sons, Jim (Kathy), Keith (Nancy) and Lee Wiglesworth and daughters, Lynn Wiglesworth and Kathleen (Joe) Perdue: additionally she leaves 13 grandchildren, 12 great grandchildren and one great- great granddaughter. Nina joined the US Marines during WWII serving for two years and met her soon-to-be husband Marine Gunnery Sgt. Wiglesworth during this time. Her love of Country and Service led to her eventually becoming one of the few females to hold the title of COMMANDER of her local American Legion Post.”