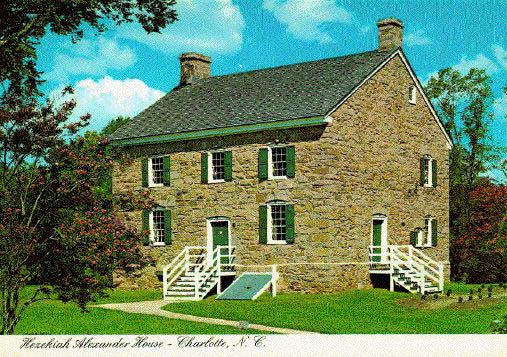 John Wells, my 5th great grandfather, built a house just north of the Battle of Kings Mountain battlefield during the American Revolution. The house is still standing and inhabited. The Old Wells cemetery is across the road.

Approximately 10 years ago I was at a Christmas party in Charlotte. I had been there awhile and predictably headed toward the desert table and the chocolate cake.

On the way I noticed a woman headed in the same direction whom I had never seen before.

We began conversing, exchanging the normal social niceties of who we were and where we were from.

I stated that I had lived most of my life in Guilford County, but my ancestral roots were in the Kings Mountain area.

She stated that her roots went back to the Charlotte area and the Alexander House.

What were the odds!?

“Hezekiah Alexander was born January 13, 1722, in Cecil County, Maryland. He was the son of James Alexander and Margaret McKnitt. His grandfather, Joseph Alexander, had emigrated to Maryland in the early years of the eighteenth century. Sometime after 1754, Hezekiah, as well as his brother, John McKnitt, emigrated to North Carolina.

The Alexanders quickly established themselves in their new home, Mecklenburg County. Although Hezekiah had come to North Carolina as a blacksmith, it was as a farmer that he made his fortune. On April 1, 1767, he purchased, from his brother John, a tract of land containing over three hundred acres located on a branch of Sugar Creek. It was here that in 1774 he built a stone house to accommodate his wife, Mary Sample, and their growing family. The house was to remain Hezekiah’s residence until his death in 1801, and became the center of his expanding farming enterprises. Both Hezekiah and John McKnitt Alexander were active in the affairs of their county. John was a crown surveyor and county magistrate. Hezekiah played an active role in the church, being an elder in the Sugaw Creek Presbyterian Church. He was also a trustee of Queens College, chartered in 1771, renamed Liberty Hall in 1774. Both brothers numbered among their friends and associates the prominent community leaders of Mecklenburg; among these were Thomas Polk, William Sample, Ephraim Brevard, the Phifers, the Averys, and Jeremiah MaCafforty.

With the approach of the Revolution, both of the Alexander brothers became increasingly involved in the events which would culminate in independence from Great Britain. In 1775 both men were members of the Mecklenburg County Committee of Safety. On August 21, 1775, Hezekiah was appointed by the Provincial Congress meeting in Hillsborough to the Salisbury District Committee of Safety which was to serve as the local governing body for a multi-county area. In November, 1776, Hezekiah joined other state delegates at Halifax to form the Fifth Provincial Congress which was charged with the task of writing the first state constitution. After the Halifax Congress, Hezekiah joined the Fourth Regiment of North Carolina Troops as Paymaster.

Hezekiah Alexander’s stone house is possibly the only extant structure belonging to a framer of the state’s first constitution.”