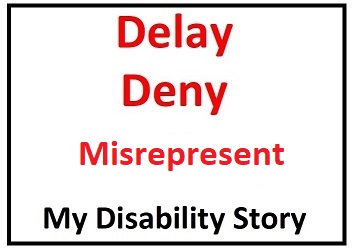 “Then you should say what you mean,” the March Hare went on. “I do,” Alice hastily replied; “at least–at least I mean what I say—that’s the same thing, you know.” “Not the same thing a bit!” said the Hatter. “You might just as well say that ‘I see what I eat’ is the same thing as ‘I eat what I see’!” – Alice, the March Hare and the Mad Hatter, Ch. 7, A Mad Tea-Party.
“No, no!” said the Queen. “Sentence first – verdict afterwards.” “Stuff and nonsense!” said Alice loudly. “The idea of having the sentence first.” – Alice replies to the Queen, Ch. 12, Alice’s Evidence.

I told my friends for years that dealing with Thrivent’s bizzare requests, responses and decisions with my claims was like being in “Alice in Wonderland.”

Now I know why.

I have in my possession startling new evidence which explains the “Alice in Wonderland” responses and requests I received from Thrivent personnel and agents during the processing of my disability claims.

I deserve an apology and reparations.

In the absence of that I will request a proper mediation session.

Prior to my receipt of the new evidence, I requested that we proceed to mediation in a letter I wrote to Thrivent dated June 11, 2018:

“I was informed that the appeal process was reopened after the mediation session of February 2017. This was the result of a discussion between my attorney, attorney Wayne Luck and the mediator, Mr. Gwyn. Mr Gwyn passed away over six months ago. Recently my attorney filed a lawsuit and Thrivent reiterated that we are bound by the MDRP process. My recommendation is that we go to the next step following appeal, Mediation.”

In that letter I went into much detail about the fact that the first mediation was improperly conducted.

Response from Thrivent’s outside attorney July 12, 2018.

“You asked to be informed if “there is a change of heart or philosophy.” Based on the facts as Thrivent now understands them, it will not change its position regarding mediation.”

If Thrivent had treated me squarely, with concern for me as a member and human being, I might have embraced arbitration.

On August 9, 2018, Thrivent’s current outside attorney sent the following:

“Please know that Thrivent’s hope in commencing arbitration is that your long-standing dispute with the Society can be resolved with finality, which is to the benefit of you and Thrivent alike.”

Seems sincere, right?  I have no ax to grind with the attorney at this point. He is acting on Thrivent’s information and instructions.

The next day, August 10, 2018, the letter from Thrivent’s senior claims examiner perpetuates (and explains) the “Alice in Wonderland” position and uses that bizarre explanation to attack me.

So much for sincerity.

“Thrivent may or may not have informed you of their response to the NC Insurance Commission query regarding my complaint.

Since you are the newest and therefore most “innocent” player in this controversy, represent Thrivent in some capacity, an officer of the court and bound by the ethics of the NC Bar, and, because I believe it is the right thing to do, I am giving you a heads up.”

I have also learned a great deal about arbitration and its mandatory use in insurance policies.

The following aspects are problematic:

1) This matter could have been cleared up years ago, in a courtroom or simply by representation from an attorney with the specter of going to court a possibility.

2) Thrivent maintained that we were bound by their MDRP, Member Dispute Resolution Program, which they enacted retroactively.

3. The NAIC, National Association of Insurance Commissioners, on August 15, 2016 stated:

“Why arbitration clauses should be banned”

“If arbitration was truly a neutral forum rather than one favoring insurers, then there would be no need for an insurer to insist on its use before a dispute has even arisen.”

5. National Association of Consumer Advocates June 23, 2012: “According to NACA’s survey of nearly 350 consumer attorneys, it is clear that private arbitration does not compare at all well to our nation’s traditional justice system. Consumers have lost the opportunity to assert their rights under many state and federal consumer protection statutes because of pre-dispute binding mandatory arbitration.”

6. CFPB study May 18, 2016: “Most private consumer lawyers are very reluctant, or completely unwilling, to represent clients in a system that they believe is rigged against consumers. Unlike the banking industry lawyers, consumer lawyers generally only get paid if they win cases. Many of them have a reasonable, earned distrust of forced arbitration, and extensive surveys of consumer lawyers consistently show that most will walk away from a case rather than go to arbitration.”

7. Arbitration, lacking the protections of litigation, is binding.

I have tried repeatedly to resolve this injustice and have reached out with an olive branch, which was difficult given what has transpired and the impact on my life.

If I do not get a reasonable response from Thrivent soon, I will be forced to reveal the proof of the “Alice in Wonderland” protocol.