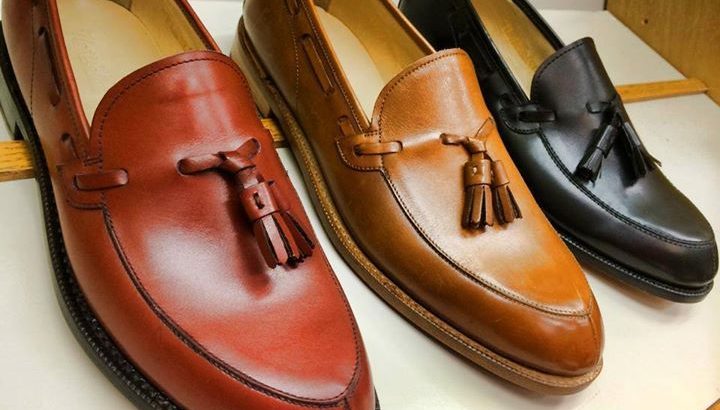 “Nettleton Nightmare
The nettlesome side of “Greensboro’s Shoe””

“When I recently noticed my accountant was wearing non-Nettleton tassel loafers, I winced. In 2012, O.Henry magazine glorified Nettletons as “The Greensboro Shoe [in] the golden age of haberdashery.”

I frankly do not understand all this bootlicking heaped upon a brand of shoes that evokes, for some, painful memories of being bullied and mocked by the fashion police in junior and senior high schools.

My time in hell was three years at Kiser from 1967–1970 and one year at Grimsley ’70–’71. The “uniform” of our generation’s equivalent of the Hitler Youth (aka “Brownshirts”) was a pair of Nettletons, black socks, and often an Izod shirt featuring, appropriately, a vicious alligator. Penny loafers were allowed as an alternative to Nettletons but never with pennies in the slots at the front of the loafers — unless you had a death wish. Such fashion deviations brought instant and brutal punishment by the Brownshirts. Another taboo: wearing “fake Nettletons”

But not everyone who sported Nettletons was a bully. I remember a good guy from the Kiser years whom I will call John Brandt, who wore the prized loafers. When a bully stepped on the tip of his Nettleton and turned his foot to grind the shoe’s toe, John hit the guy in the face the very next day at his father’s suggestion and dragged the bleeding offender to the principal’s office.

My parents for whatever reason would not let me buy Nettletons. My feet were also too big and too wide for the shiny penny loafers (which my parents did allow) flattening the inside edges of the shoes.

Another fashion offense that put me in harm’s way was donning a pair of white or light colored socks, a lightning rod that drew instant fire. I remember a dangerous duo — let’s call them Lane Smith and Paul Downing, who were both Nettleton-wearers — seeing me commit just such a fashion offense. Rocking back and forth on their feet, they mocked me by sarcastically singing “We like those WHITE SOCKS!” Lane once expressed his disapproval of me by spitting on me through the gap in his front teeth. Once, when the bottoms of my feet were badly cut and I had to wear white socks, I covered them with a pair of dark ones so I would live another day.

Nettletons or “Neds” as they were called, became meaningless after I left Greensboro’s public schools. At Oak Ridge Military Academy, Wake Forest University and Campbell College Law School, one’s academic performance and character were much more important than a shoe brand.”

I attended Page High School a few years earlier and my recollections mirror Mr. Jones’. I did not wear Nettletons in high school either. I was the eldest of 4 kids and my silly family preferred eating to attiring me in overpriced shoes. The Nettletons must have been at least 3 times the average price of decent shoes.

After entering the workforce and over several years, I acquired 3 pairs of Nettletons and still have them. However, due to a neuropathy in my right foot that arose 10 years ago, I can’t wear them.