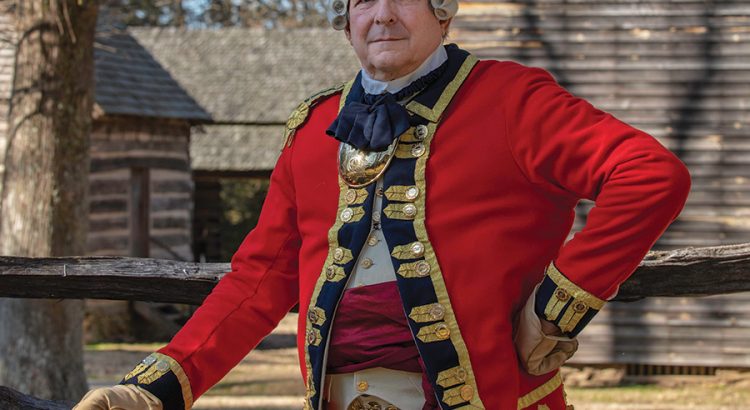 “10 Things You Never Knew about the Battle of Guilford Courthouse

Many of us had the great fortune to grow up with the historic Guilford Battleground in our backyard, the place where the city’s namesake General Nathanael Greene met British General Cornwallis’ army. The fateful showdown on March 15, 1781, helped turn the tide of the Revolutionary War in favor of the Patriot struggle for independence from Great Britain. Today, when you are driving over streets named New Garden and Battleground or through neighborhoods called Kirkwood and British Woods, you are covering bloody ground where arguably the pivotal battle for American independence took place. One local story holds that the name “Brassfield” derives from brass military ornaments recovered in the vicinity of Horse Pen Creek where the shopping center exists today.

If you’ve never witnessed the battle’s annual series of re-enactments live, an event that attracts hundreds of “Rev War” re-enactors and battlefield buffs from across the nation to what is now officially called Guilford Courthouse National Military Park, you are in for a real treat. It’s the perfect mix of history and military pageantry on an early spring day.

Jay Callaham not only happens to be an expert on military history and a veteran re-enactor of more than 50 years, but also the narrator of the action at Guilford Courthouse for approaching 20 years. Among other things, he also served as an advisor on the film The Patriot. Callaham portrays an officer of the Coldstream Guards, and for many years acted as a British field commander, and has performed the role of Lord Cornwallis. During his nearly 20 years of narrating the battle presentations, he is typically uniformed as a British Officer.

We caught up to the retired communications executive and former Army major on a recent afternoon at the Greensboro Masonic Temple on Market Street, wondering if there might be 10 curious and lesser-known facts about the famous battle.

1. The Super Bowl of the Revolutionary War

By the time Cornwallis marched his troops to Deep River Friends, where he camped prior to the battle, having unsuccessfully engaged General Greene’s army for six weeks across the Carolinas to the Dan River and back, both armies were showing serious wear and tear. “Both were in pretty terrible shape. Cornwallis halted his march in Salisbury, for example, just to find shoes for his troops. As they came through Old Salem,” notes Callaham, “the British and their camp followers stole clothes off lines. Despite their worn appearance, Cornwallis’ 33rd Regiment was among the best in the world. His force included the renowned Royal Welch Fusiliers, and veteran 71st Highland Regiment, as well as the battle-hardened Brigade of Guards and Hessian Regiment von Bose (pronounced bose-a), all led by seasoned commanders. Not to mention American Loyalist or Tory troops. Greene’s force was a mix of militia troops from the Carolinas and Virginia, many of whom had prior experience and training in the Continental Army, as well as the 1st and 2nd Maryland Continental Regiments and Kirkwood’s Delaware Continentals. One army was led by a British General who’d never lost a fight in the field, the other by a Colonial general who’d never won a fight in the field — and wouldn’t win this one. In many respects, despite their tattered condition, this was the Super Bowl of the American Revolution, the battle that changed the whole complexion of the war and brought it to a close.

2. The Myth that the North Carolina Militia failed to hold its ground.

In his report following the battle, General Greene asserted that the front line of the deployed Americans — manned by the North Carolina Militia — failed to hold its ground during the first assault by the British. “He wrote that the Carolina militia broke and ran at the start of the action. It’s simply not true,” says Callaham. “They weren’t even a true militia, rather a mix of local farmers and tradesmen and highly seasoned Continental troops that had proven themselves in plenty of action. They were deployed behind split rail fences overlooking Horse Pen Creek. The next line up was the Virginia militia followed by the 1st and 2nd Maryland. The commander of the 71st Highland Regiment — one of the finest units in the British army — reported that the lost half his company in the first volley. The North Carolina Militia troops did their job splendidly, in fact, enduring a 30-minute cannonade from three-pounder Royal Artillery cannons. Greene was simply trying to cover his rear end for losing the battle, which broke out everywhere and was mostly one of complete chaos. Fighting was brutal and bloody, hand-to-hand at times.”

3. The Scope of the Battlefield

The scope of the battlefield was huge, stretching from New Garden Friends — where Kirkwood’s Delaware troops engaged along New Garden Road — to the Guilford Courthouse site, a distance of about four miles. Cornwallis’s 2,000 troops were deployed along what is now Battleground Avenue, roughly from where Lowe’s Home Improvement is today all the way to Walmart. Artifacts from the battle have been found around both big box stores and along Battleground. The national battlefield encompasses only about a third of the actual battleground, and does not include skirmish sites along New Garden Road. Other parts of the battlefield are under Forest Lawn Cemetery and Greensboro Jaycee Park, both places where many artifacts have been found.

Soldiers in both armies used similar weapons, mostly muskets made in France or the venerable British Brown Bess muskets commonly used by infantrymen on both sides. Muskets fired a ball about three-quarters of an inch in diameter, loaded from paper cartridges containing powder and bullet or buckshot, rammed down the unrifled, smooth-bore barrel to the breech. A skilled fighter with a musket could load and fire his musket three times within a minute. The musket had an auxiliary weapon as well — a fixed bayonet — used effectively by the tenacious 1st Maryland at the Battle of Guilford (though by the 18th century, deaths in battle from bayonets were becoming less common). Rifles were a more specialized weapon, defined by a barrel with twisted grooves along its interior that allowed for a more accurate shot. The problem was a slower loading process that could be problematic in close-quarter fighting. On the other hand, rifles had extended ranges of accuracy — up to 300 yards — and were used effectively by both sides during Britain’s failed Southern Campaign, whose objective was to sever the South from the North, destroying the “bread basket” of the Colonial Army and ending the war in Britain’s favor. Rifles affected the outcome of at least three major Southern battles — at Kings Mountain, Cowpens in South Carolina and to some extent Guilford Courthouse, where the British used Jäger riflemen from Germany to great effect. These were skilled hunters dressed in green, whose deadly accuracy and discipline made them formidable foes. “The Jägers were professional huntsmen and were crack shots. The problem was every rifle had its own caliber, which often meant a rifleman had to make his own ammunition. Rifles played a significant role but muskets and bayonets won the war,” says Callaham.”