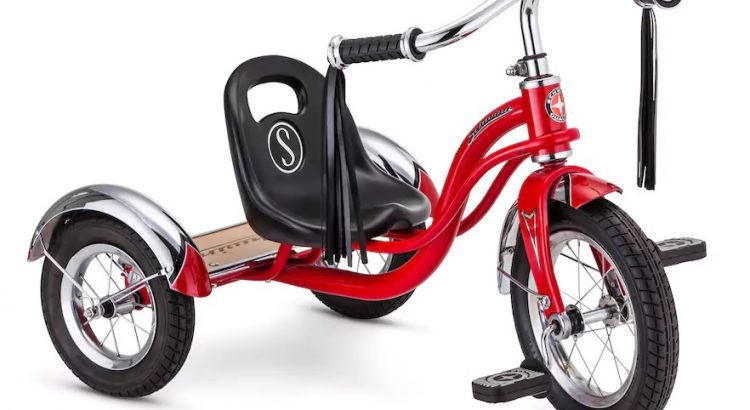 The first 2 were stolen.

The last was purchased used at Recycles Bike Shop.

The older Schwinn bikes were made better, before they started selling to the big box stores at reduced prices.

I was at a photo shoot yesterday and saw the featured tricycle. I was blown away to discover it was a Schwinn. It looked like something they would have made in the 50’s or 60’s. Impressive!

I lived next door to Glen Higgins many years ago. He was the owner of Higgins Cycle Shop which sold Schwinn bikes for many years in Greensboro, NC.

“I was lunching with brother Hank and sister Rives at Oakcrest Family Restaurant, where the food is excellent by the way; their prime rib sandwich and spaghetti come highly recommended. And so very inexpensive, especially when you consider my brother picked up the tab. (Someone had to!) Taking photos outside the entrance, everything has to be documented these days dontcha know, I glanced across the street where, to my surprise, I noticed Greensboro mainstay Higgins Cycle Shop had packed up and gone.

In 1972, Glendi moved into his brand-new flagship Schwinn superstore on Battleground, back when 10-speed Paramount racing bikes were hot, featuring now-familiar lowered-below-the-frame, backward bending handlebars. In my adolescent imaginings, Higgins was one of two businesses, Carolina Camera being the other, where the cool kids worked.”

The tricycle was made in China.

I wonder what it cost to manufacture it?