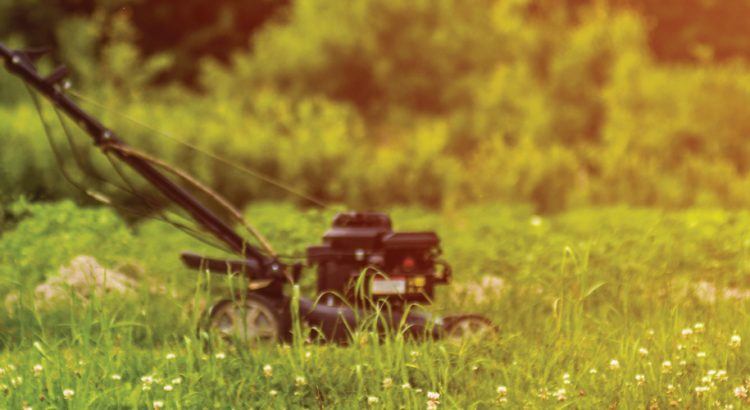 “Last Days of the Yard King

A final summer of innocence is shelter from the storm

That July I owned the neighborhood. Or at least my block.

It was 1968. I was 15, towing a wheezing Lawn-Boy push mower behind a well-traveled Schwinn Deluxe Racer with chrome-plated fenders and dual side baskets. My mother called me Jimmy the Yard King.

Actually, I had three jobs that summer. One was mowing half a dozen lawns in the neighborhood at a time before lawn crews were commonplace and customers could phone your parents if they didn’t like the job you did.

The second was a weekend job as an usher at the newly opened Terrace Theatre, where I was required to wear a snazzy tangerine orange, double-knit sports jacket with a black, clip-on bow tie. The jacket matched the theater’s innovative “rocking chair” seats. My job was to keep kids from violently rocking their brains out and disturbing other customers by banging their knees. This often resulted in my giving chase to truants hopped up on candy.

That summer I also had my first job teaching guitar two mornings a week at Mr. Weinstein’s music shop — for five dollars an hour, no less.

Given my combined income, my mom joked that she might have to someday ask me for a loan. I was saving up for either an Alvarez guitar or a Camaro, which ever came first.

The year 1968 has been called “The Year that Shattered America.”

Looking back, it was the year we both began to lose our innocence.

Being a son of the newspaper world, I paid close attention to the news, read the paper daily and never missed Uncle Walter on his evening broadcast.

That year, for the first time, the Tet Offensive by the Viet Cong brought the horrors of the war in Southeast Asia home to 56 million American TV sets. On my birthday that February, I saw the iconic photograph of a South Vietnamese general publically executing a Viet Cong prisoner. The picture shocked Americans, stoked the anti-war movement and turned millions of Americans against the war. One month later, the My Lai massacre that killed more than 500 civilians but wasn’t revealed and investigated for another year — all but finished off public support for the war.

That spring I taught myself how to play every song on the Beatles’ Sgt. Pepper’s Lonely Hearts Club Band and started performing around town with my buddy Craig Corry who lived two doors away on Dogwood Drive. We wound up placing third in the city’s teenage talent show that next fall and made an appearance on Lee Kinard’s Good Morning Show, our first and last TV appearance.

On a breezy afternoon that April, I was playing golf with my dad when we heard that Martin Luther King Jr. had been assassinated in Memphis, Tennessee. We watched riots break out in Detroit and the Poor People’s March on Washington, D.C. happen on TV. Commentators wondered if America was coming apart at the seams, heading for revolution in the streets.

I was more interested that the Broadway smash musical, Hair, featured live and fully naked people on stage. I couldn’t fathom it but sure wished I could see it.

On the plus side that summer that America was going to hell in a hand basket, as Mr. Huff down the street always grumbled when I showed up to collect my $8 for mowing his lawn, I took Ginny Silkworth to the Cinema Theater to see Franco Zeffirelli’s Romeo and Juliet. It was great. I fell in love with Shakespeare and, in a way, Ginny Silkworth. She was my first date ever. We grew up attending the same church group. Unfortunately my dad had to drive us to the theater, under strict orders not to say anything embarrassing.

After the movie, Ginny, a deep thinker with a warm and horsy laugh, wondered what I planned to do with my life. I told her I planned to write books, probably travel the world, play my guitar, mow lawns and maybe move to England. She punched me on the arm and laughed adorably. Ginny and I stayed in touch for decades. She went on to become a gifted schoolteacher in Philadelphia and passed away from breast cancer many years ago. I miss her still, especially her wonderful laugh.

Earlier that summer, Robert Kennedy was gunned down after winning the California Democratic primary. My mother really liked Bobby Kennedy. We watched his funeral train together and she actually cried. My dad was a half-hearted Nixon guy. My mom used to joke that she did her patriotic duty by cancelling out his vote in the voting booth.

By July I was deep into my lawn-mowing life, guitar-playing, trying to forget what was going on in America. I hated the usher job at the Terrace so much I handed in my elegant orange usher’s jacket in early August, blaming my family’s annual beach trip to the Hanover Seaside Club at Wrightsville Beach.

We went there every year for at least half a dozen years, though this would be the final time. I loved the Seaside’s unfancy dining room, its cool wooden floors and big porches where I could sit for hours in a real rocking chair and read. I read Graham Greene’s The Heart of the Matter and The End of the Affair that summer, getting hopelessly addicted to his storytelling. I also finished John LeCarré’s The Spy Who Came in from the Cold, picturing myself mowing a lawn in some far-flung, sun-mused outpost of the British Empire, a spy in short pants, enjoying a gin and tonic with some sultry blond who looked like Tuesday Weld.

That week a family from southern Ohio was visiting the Seaside Club. A pretty girl named Sandy was reading Edward Abbey’s Desert Solitaire, bare feet tucked up in the rocker just down the porch. We struck up a conversation and took a walk on Johnny Mercer’s Pier. Sandy told me that we humans were destroying the world, killing the oceans with our garbage and fighting an unwinnable war. She told me she was going to become an “environmental activist” like her aunt who was attending the Democratic National Convention in Chicago as a delegate from Ohio. The Seaside Club didn’t have a TV set, so there was no way to see what was happening in Chicago. We heard, however, that there were police riots and lots of injuries at the convention when Chicago’s mayor turned the police loose on Yippies and the Students for a Democratic Society who tried to crash the party.

For the rest of the week we were pretty much inseparable. Sandy was a year older and half a head taller than me. She was no Tuesday Weld but I liked her a lot. Like me, she was crazy about books and movies.”