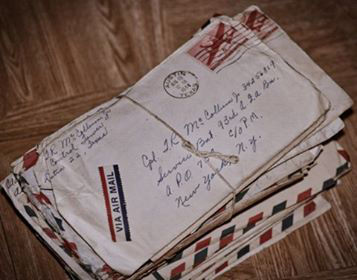 The little package of letters on top of an old trunk were like a magnet.

Evan Garmon was helping Brian Greby clean out his house to put it on the market, but couldn’t keep his eyes off the letters. They were in a bundle, tied tightly with twine. The envelopes were brown and probably old, Garmon decided.

Eventually, he couldn’t resist inspecting the bundle. The first thing that caught Garmon’s eye was the postmark: August 1944 Austin, Texas. There was a 6-cent stamp on the top envelope along with a red, white and blue “Via Air Mail” sticker.

His first thought was they belonged to Greby’s grandfather, but Greby said he knew nothing about them. The packet had been in a corner of the attic earlier that day, and Greby said they probably were there when he bought the house. Later, as Garmon asked again about their origin, Greby said they may have gotten mixed in with his belongings when he moved from the corner of Stage Coach Trail and Friendly Avenue.

Garmon was astounded when Greby said the letters were headed for the trash. Garmon asked if he could have them.

Greby laughed and “looked at me kinda funny, asking what I wanted with them,” Garmon recalled.

“I romanticized about sitting by a fire and reading through those letters,” Garmon said. He and his girlfriend, Jessica Eppard, had recently moved into a new house with a fireplace.

Later, the couple sat in their den reading the letters and were “absolutely blown away,” he said.

The letters were to Cpl. T.R. McCollum from his wife Billie, while he was in service or around Normandy in 1944. In one letter postmarked Sept. 21, 1944, Billie wrote: “It has been exactly one year since you landed in Africa.””

“The letters emphasized how much Billie loved and missed Tom.

When Ellen first got the letters, it was special to see her grandmother’s handwriting.

“She had told me stories growing up — different things she had done — and the letters brought to life some of those stories,” Ellen said.

Every time she reads a letter, it brings her to tears, Ellen said.

“I am looking at one of her most prized possessions,” Jim said, in a phone conversation. It is a small picture taken when his father was in Italy.

His father’s Army unit had taken refuge in an old farm house that had been shelled and shelled, Jim said.”