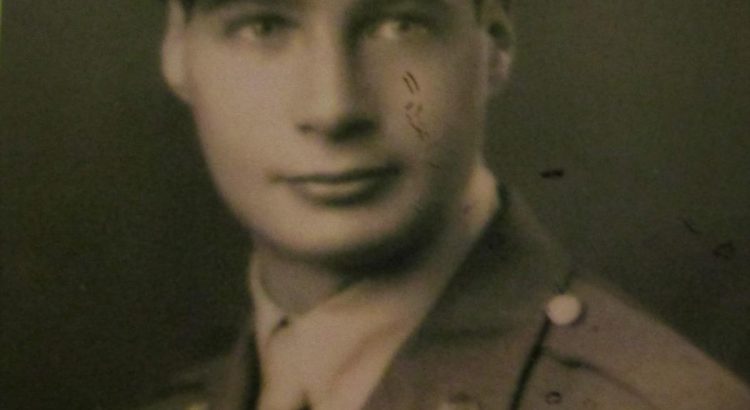 “I felt fortunate to be at Washington and Jefferson College in Pennsylvania,” Rosthal said. “However, when the program collapsed, we were sent to Camp Claiborne, La., and assigned to the 84th Infantry Division.”

Rosthal’s “highly trained specialty” turned out to be a bazooka; Henry Kissinger became a rifleman.

The 84th Infantry Division was assigned to the Aachen salient, the first German town to be taken.

“I carried an M1 rifle, a bazooka, and wore an apron with two rounds of ammo,” Rosthal said.

One day, he dove into a foxhole, but there wasn’t room for the bazooka.

“Incoming artillery blew it to pieces, so I stuck to the M-1 after that,” he said.

“Sometimes I placed my socks under my arms to warm them up,” he said.

One day he found a new bundle of woolen socks left behind by British troops and slipped into a nearby stable to change.

“The Germans were infiltrating our lines when I returned on the run, so it’s a wonder I didn’t get shot, either by the Germans or friendly fire,” he said.

After their time along the Siegfried Line, Rosthal’s unit was trucked to Marche, Belgium, a small town near Bastogne.

“Even though the cost was heavy, we held Marche during the Battle of the Bulge,” he said.

They lost two company commanders in a matter of days.

“I knew one of them pretty well since I had translated from the French for him,” Rosthal said.

It was a hollow victory when Rosthal’s regiment finally fought its way across the Roer River. Rosthal took fragments in his right leg from a mortar shell.

“The nitrate fumes and smoke were so heavy I thought my leg might be gone,” he said. “When it cleared, my leg was still there, but I saw a gaping hole.””

During the five years in Paris, he worked for a department store, for MGM, tutored English and was a courier for the Marshall Plan. He also met and married the daughter of a German refugee family.

He took his Sorbonne thesis back to the University of Chicago for his master’s degree. In 1955, he joined the University of Michigan at Ann Arbor on a dual fellowship in French and philosophy and later received his doctorate, specializing in continental philosophy.

He taught philosophy in several schools, including Ohio State, Kenyon College and Brooklyn College, as well as at UNC-Chapel Hill and Duke University.

In 1961, Rosthal came to Women’s College (now UNC-Greensboro) where he helped organize the philosophy department, taught many philosophy courses over his 31-year career and headed the department for nine years.

He served as president of the National Association of Scholars State affiliate from 1994 until he retired in 2018.”