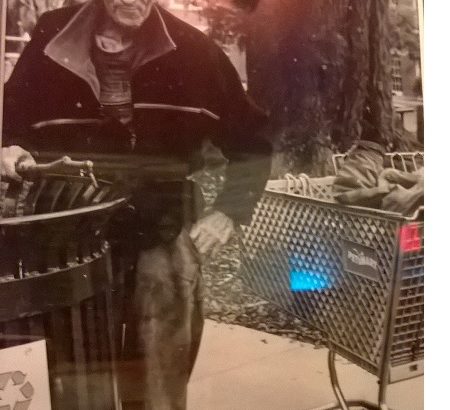 I knew Laurence Sams, who my friends called “Old Sams.” He would often come into Tate Street Coffee Shop and say hello and just as often refer to to the weather as “goin to be a hot one” or whatever the occasion would dictate.

I admired him for keeping on day after day regardless of the weather and always having a smile.

He was an inspiration to me and many others.

His passing left a huge void.

This article could not be found on the News Record site or the internet and is therefore presented in it’s entirety.

“Remembering the real Sam the Can Man

Laurence Sams, best known as Sam the Can Man, wanted no pity, even though strangers looked at him with sympathy.

Despite assumptions that he must have been homeless and broke, he was anything but.

He had an apartment at the end of Joyner Street next to the railroad tracks, loads of friends and bank accounts. He never expressed needs nor wants, not even for a telephone or car. He had neither.

He won’t be making his rounds again. This Tate Street and College Hill fixture was found dead June 4.

Bob Beerman, a neighbor and close friend, had checked on Sams on Sunday night to remind him of a doctor appointment the next day. Sams had been ill with the flu.

Beerman returned not long afterward with orange juice for Sams but got no response at the door. He figured Sams was asleep.

When Beerman returned last Monday and his knocks again went unanswered, he pulled one of Sam’s green grocery carts used for hauling to a side window, climbed on top and peered in. Sams was sprawled on the floor. Beerman broke a window, but it was too late for Sams, 79.

Two days before his death, he was pushing his grocery cart, though with difficulty.

“He stopped in front of my house and laid his head on his arms to rest,” neighbor Karen McClamrock said. “I looked carefully at him to see if he was all right. In a minute or two he was on his way again. But as I looked at him, I noticed how thin he had become.”

When Sams filled a bunch of black bags, he’d load his cart. Bags towered so high they hid Sams behind the cart as he pushed it toward a recycling center on Lee Street.

“He was always a giving person,” he said.

When Sams found a usable but discarded doll or toy on his rounds, he’d leave it on the steps of a neighbor who had a little girl. McClamrock said Sams tended a vegetable garden behind his apartment and shared the harvest with neighbors.

A UNCG student saw Sams ( Context guess: carrying gloves and then ) walked into a Tate Street shop and gave them to someone he felt needed them more. Besides, he had plenty of gloves.

McClamrock remembered Sams once wearing a cap with a “rather X-rated saying on it.”

“We figured he could not read,” she said. “It was hard to imagine him wearing anything with improper sayings.”

Indeed, Sams was a churchgoer. McClamrock said he’d put on a white shirt, beige trousers and a cap to walk to First Baptist Church on West Friendly Avenue to attend Sunday school. Sams arrived early to set out hymnals. “The church meant the world to him,” said church business manager Tim Smith.

Although Sams wasn’t educated, former landlord Debra Craig said, “in many ways he walked among scholars as a great teacher of qualities that are elusive to us: gratitude for the simplicity of life, unwavering inner contentment and sense of purpose.”

Craig met Sams in 1985 when she bought the Joyner Street apartment house. Sams had already lived there for years. When Craig sold the place in 2000, she inserted a deed restriction requiring the buyer to let Sams live out his life there.

Craig stayed in touch. She brought Sams occasional K&W Cafeteria takeout meals, which he loved. He offered to pay. She wouldn’t hear of it.

Sams grew up on a farm near Danville, VA, and served in the Army in the 1950s. He returned to farming, then moved to Greensboro to work for Carolina Loom Reed Co. ( Believed correct:  and George C. Brown & Co ) lumber wholesaler that was across from the coliseum.

Even when working full time, Sams picked up cans. Jane Malloy of Jamestown, who was kin by marriage to Sams, thinks collecting kept the lifelong bachelor busy. Money certainly wasn’t the reason. He had savings accounts. He stood a great distance from being destitute, Malloy said.

The Malloy family has hired a lawyer to work on Sam’s estate, but don’t yet know his worth.

“This man never spent any money on himself,” Malloy said. She added: “He was a special man who wanted nothing for himself. He wanted everyone to be happy.”

When not hunting for cans, Sams relaxed on a bench around a tree in the Tate Street shopping district. A News & Record photographer once tried to photograph him there. Sams wouldn’t consent, but Bob Beerman’s brother, Bill Beerman, photographed Sams toting his bag at Mendenhall and Spring Garden streets. The photo was displayed in an exhibit at Tex & Shirley’s Restaurant.

As noted, his life amounted to more than collecting cans. He farmed, served his country, worked for two companies and loved his church and friends. But many in the UNCG and the College Hill communities will always remember him–fondly–as Sam the Can Man.”