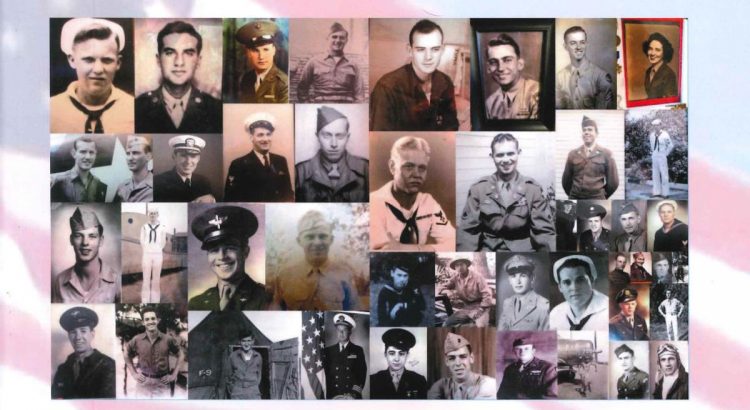 “These stories begin before Pearl Harbor and continue after the atomic bombs were dropped. The Enola Gay bombardier who dropped the bomb on Hiroshima is written about. As is the B-29 aerial photographer who happened upon Hiroshima at the time of the blast — and recorded the only 12 o’clock high photo.

Several stories end amid training and equipping for the invasion of the Japanese homeland — made moot when Japan surrendered.

Most of the stories are based on firsthand information from veterans themselves. In cases where the veteran had passed on — or made the ultimate sacrifice in combat — information was provided by family or friends.

Stories from all branches of the service are in the book, even one about a Greensboro Quaker woman pilot killed while ferrying aircraft for the Royal Air Force. Many stories cover Americans taken as prisoners of war by the Germans or Japanese — one American civilian POW was taken as a young girl, along with her sister and mother.

Locals from privates to generals served with Doolittle’s Raiders, Merrill’s Marauders, Guadalcanal Marines and fought at Anzio, Normandy and Bastogne. Family stories include several with three brothers serving, at least one with four brothers and one about my brother. One story features a father-son combination who both retired as major generals.

Crewmen from practically every B-17 crew position were chronicled, as were seamen aboard Navy ships from gunboats to submarines to battleships.

Rosie the Riveter appears in several stories, as do reports of how the home front survived shortages, rationing, deprivals and loss of loved ones.

In addition to their wartime experiences, stories reflect the after-life of World War II survivors. Their spectrum ranges from truck drivers to chief executive officers, farmers to ranchers, carpenters to doctors, lawyers to professors, small business owners to corporate entrepreneurs.”