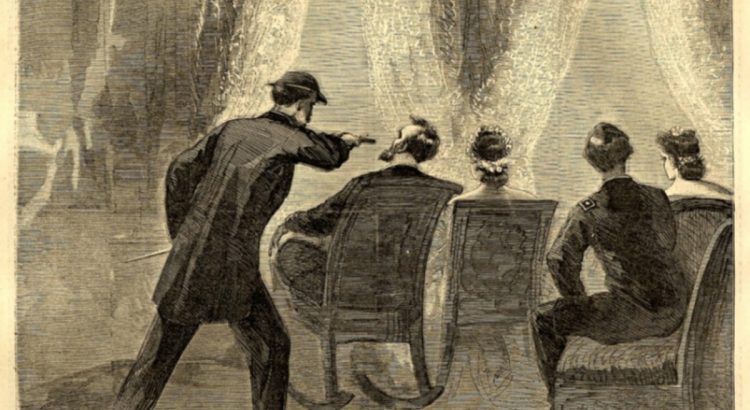 Report on death of President Lincoln by Charles A. Leale M. D.

“Having been the first of our profession who arrived to the assistance of our late President, and having been requested by Mrs. Lincoln to do what I could for him I assumed the charge until the Surgeon General and Dr Stone his family physician arrived, which was about 20 minutes after we had placed him in bed in the house of Mr. Peterson opposite the theatre, and as I remained with him until his death, I humbly submit the following brief account.

I arrived at Fords Theatre about 8¼ p.m. April 14/65 and procured a seat in the dress circle about 40 feet from the Presidents Box. The play was then progressing and in a few minutes I saw the President, Mrs Lincoln, Major Rathbone and Miss Harris enter; while proceeding to the Box they were seen by the audience who cheered which was reciprocated by the President and Mrs Lincoln by a smile and bow.

The party was preceded by an attendant who after opening the door of the box and closing it after they had all entered, took a seat nearby for himself.

The theatre was well filled and the play of “Our American Cousin” progressed very pleasantly until about half past ten, when the report of a pistol was distinctly heard and about a minute after a man of low stature with black hair and eyes was seen leaping to the stage beneath, holding in his hand a drawn dagger.

While descending his heel got entangled in the American flag, which was hung in front of the box, causing him to stumble when he struck the stage, but with a single bound he regained the use of his limbs and ran to the opposite side of the stage, flourishing in his hand a drawn dagger and disappearing behind the scene.

I then heard cries that the “President had been murdered,” which were followed by those of “Kill the murderer” “Shoot him” etc, which came from different parts of the audience.

I immediately ran to the Presidents box and as soon as the door was opened was admitted and introduced to Mrs. Lincoln when she exclaimed several times, “O Doctor, do what you can for him, do what you can”! I told her we would do all that we possibly could.

When I entered the box the ladies were very much excited. Mr. Lincoln was seated in a high backed arm-chair with his head leaning towards his right side supported by Mrs. Lincoln who was weeping bitterly. Miss Harris was near her left and behind the President.

While approaching the President I sent a gentleman for brandy and another for water.

When I reached the President he was in a state of general paralysis, his eyes were closed and he was in a profoundly comatose condition, while his breathing was intermittent and exceedingly stertorous. I placed my finger on his right radial pulse but could perceive no movement of the artery. As two gentlemen now arrived, I requested them to assist me to place him in a recumbent position, and as I held his head and shoulders, while doing this my hand came in contact with a clot of blood near his left shoulder.

Supposing that he had been stabbed there I asked a gentleman to cut his coat and shirt off from that part, to enable me if possible to check the hemorrhage which I supposed took place from the subclavian artery or some of its branches.

Before they had proceeded as far as the elbow I commenced to examine his head (as no wound near the shoulder was found) and soon passed my fingers over a large firm clot of blood situated about one inch below the superior curved line of the occipital bone.

The coagula I easily removed and passed the little finger of my left hand through the perfectly smooth opening made by the ball, and found that it had entered the encephalon.

As soon as I removed my finger a slight oozing of blood followed and his breathing became more regular and less stertorous. The brandy and water now arrived and a small quantity was placed in his mouth, which passed into his stomach where it was retained.

Dr. C. F. Taft and Dr. A. F. A. King now arrived and after a moments consultation we agreed to have him removed to the nearest house, which we immediately did, the above named with others assisting.

When we arrived at the door of the box, the passage was found to be densly crowded by those who were rushing towards that part of the theatre. I called out twice “Guards clear the passage,” which was so soon done that we proceeded without a moments delay with the President and were not in the slightest interrupted until he was placed in bed in the house of Mr. Peterson, opposite the theatre, in less than 20 minutes from the time he was assassinated

The street in front of the theatre before we had left it was filled with the excited populace, a large number of whom followed us into the house.

As soon as we arrived in the room offered to us, we placed the President in bed in a diagonal position; as the bed was too short, a part of the foot was removed to enable us to place him in a comfortable position.

The windows were opened and at my request a Captain present made all leave the room except the medical gentlemen and friends.

As soon as we placed him in bed we removed his clothes and covered him with blankets. While covering him I found his lower extremities very cold from his feet to a distance several inches above his knees.

I then sent for bottles of hot water, and hot blankets, which were applied to his lower extremities and abdomen.

Several other Physicians and Surgeons about this time arrived among whom was Dr. R. K. Stone who had been the President’s Physician since the arrival of his family in the city.

After having been introduced to Dr. Stone I asked him if he would assume charge (telling him at the time all that had been done and describing the wound,) he said that he would and approved of the treatment.

The Surgeon General and Surgeon Crane in a few minutes arrived and made an examination of the wound.

When the President was first laid in bed a slight ecchymosis was noticed on his left eyelid and the pupil of that eye was slightly dilated, while the pupil of the right eye was contracted.

About 11. p.m. the right eye began to protrude which was rapidly followed by an increase of the ecchymosis until it encircled the orbit extending above the supra orbital ridge and below the infra orbital foramen.

The wound was kept open by the Surgeon General by means of a silver probe, and as the President was placed diagonally on the bed his head was supported in its position by Surgeon Crane and Dr Taft relieving each other.

About 2 a.m. the Hospital Steward who had been sent for a Nelatons probe, arrived and examination was made by the Surgeon General, who introduced it to a distance of about 2½ inches, when it came in contact with a foreign substance, which laid across the track of the ball.

This being easily passed the probe was introduced several inches further, when it again touched a hard substance, which was at first supposed to be the ball, but as the bulb of the probe on its withdrawal did not indicate the mark of lead, it was generally thought to be another piece of loose bone.

The probe was introduced a second time and the ball was supposed to be distinctly felt by the Surgeon General, Surgeon Crane and Dr Stone.

After this second exploration nothing further was done with the wound except to keep the opening free from coagula, which if allowed to form and remain for a very short time, would produce signs of increased compression: the breathing becoming profoundly stertorous and intermittent and the pulse to be more feeble and irregular.

His pulse which was several times counted by Dr. Ford and noted by Dr King, ranged until 12 p.m. from between 40 to 64 beats per minute, and his respiration about 24 per minute, were loud and stertorous.

At 1 a.m. his pulse suddenly increasing in frequency to 100 per minute, but soon diminished gradually becoming less feeble until 2.54 a.m. when it was 48 and hardly perceptible.

At 6.40 a.m. his pulse could not be counted, it being very intermittent, two or three pulsations being felt and followed by an intermission, when not the slightest movement of the artery could be felt.

The inspirations now became very short, and the expirations very prolonged and labored accompanied by a gutteral sound.

6.50 a.m. The respirations cease for some time and all eagerly look at their watches until the profound silence is disturbed by a prolonged inspiration, which was soon followed by a sonorous expiration

The Surgeon General now held his finger to the carotid artery, Col. Crane held his head, Dr Stone who was sitting on the bed, held his left pulse, and his right pulse was held by myself.

During the night the room was visited by many of his friends. Mrs Lincoln with Mrs. Senator Dixon came into the room three or four times during the night.

The Presidents son Capt. R. Lincoln, remained with his father during the greater part of the night.

Immediately after death had taken place, we all bowed and the Rev. Dr. Gurley supplicated to God in behalf of the bereaved family and our afflicted country.