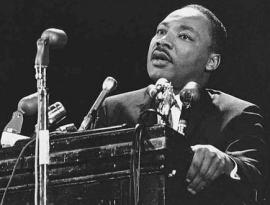 I was born in the late twenties on the verge of the Great Depression, which was to spread its disastrous arms into every corner of this nation for over a decade. I was much too young to remember the beginning of this depression, but I do recall, when I was about five years of age, how I questioned my parents about the numerous people standing in breadlines. I can see the effects of this early childhood experience on my present anticapitalistic feelings.

I went through the public schools of Atlanta for a period, and then I went to what was then known as the Atlanta University Laboratory High School for two years. After that school closed, I went to Booker T. Washington High School.

The community in which I was born was quite ordinary in terms of social status. No one in our community had attained any great wealth. Most of the Negroes in my hometown who had attained wealth lived in a section of town known as “Hunter Hills.” The community was characterized with a sort of unsophisticated simplicity. No one was in the extremely poor class. It is probably fair to class the people of this community as those of average income. It was a wholesome community, notwithstanding the fact that none of us were ever considered members of the “upper-upper class.” Crime was at a minimum, and most of our neighbors were deeply religious.

From the very beginning I was an extraordinarily healthy child. It is said that at my birth the doctors pronounced me a one hundred percent perfect child, from a physical point of view. I hardly know how an ill moment feels. I guess the same thing would apply to my mental life. I have always been somewhat precocious, both physically and mentally. So it seems that from a hereditary point of view, nature was very kind to me.

In my own life and in the life of a person who is seeking to be strong, you combine in your character antitheses strongly marked. You are both militant and moderate; you are both idealistic and realistic. And I think that my strong determination for justice comes from the very strong, dynamic personality of my father, and I would hope that the gentle aspect comes from a mother who is very gentle and sweet.

My mother, Alberta Williams King, has been behind the scene setting forth those motherly cares, the lack of which leaves a missing link in life. She is a very devout person with a deep commitment to the Christian faith. Unlike my father, she is soft-spoken and easygoing. Although possessed of a rather recessive personality, she is warm and easily approachable.

The daughter of A. D. Williams, a successful minister, Alberta Williams grew up in comparative comfort. She was sent to the best available schools and college and was, in general, protected from the worst blights of discrimination. An only child, she was provided with all of the conveniences that any high school and college student could expect. In spite of her relatively comfortable circumstances, my mother never complacently adjusted herself to the system of segregation. She instilled a sense of self-respect in all of her children from the very beginning.

My mother confronted the age-old problem of the Negro parent in America: how to explain discrimination and segregation to a small child. She taught me that I should feel a sense of “somebodiness” but that on the other hand I had to go out and face a system that stared me in the face every day saying you are “less than,” you are “not equal to.” She told me about slavery and how it ended with the Civil War. She tried to explain the divided system of the South—the segregated schools, restaurants, theaters, housing; the white and colored signs on drinking fountains, waiting rooms, lavatories—as a social condition rather than a natural order. She made it clear that she opposed this system and that I must never allow it to make me feel inferior. Then she said the words that almost every Negro hears before he can yet understand the injustice that makes them necessary: “You are as good as anyone.” At this time Mother had no idea that the little boy in her arms would years later be involved in a struggle against the system she was speaking of.”