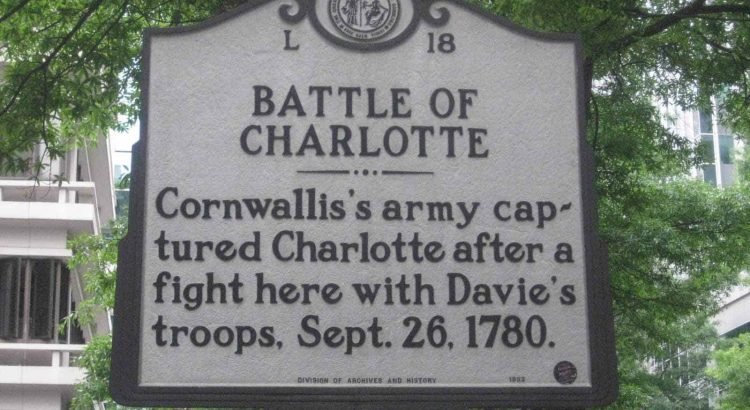 The Battle of Charlotte
September 26, 1780 at Charlotte, North Carolina

“The Battle of Charlotte took place at the Mecklenburg County Court House, which is now the site of the Bank of America tower at Trade and Tryon Streets in downtown Charlotte. An advance guard of Lieutenant General Charles Cornwallis’ army rode into town and encountered a well-prepared Patriot militia, under the command of Major William R. Davie, in front of the court house.

A skirmish ensued in which George Hanger, leading the British cavalry, was wounded. The small Patriot force, which had not intended more than token resistance, withdrew north toward Salisbury upon the arrival of Cornwallis and the main army.”

“Charlotte was then a small town, with two main roads crossing at the town center, where the Mecklenburg County courthouse dominated the intersection. The southern facade of the courthouse had a series of pillars, between which a stone wall about 3.5 feet high had been constructed to provide an area that served as the local market.

Davie positioned three rows of militia at and north of the courthouse, with one behind the stone wall, and placed cavalry companies on the east and west sides of the courthouse, covering the roads leading away in those directions. Finally, he put a company of 20 men behind a house on the southern road, where he was expecting the British advance.

As his column approached Charlotte, Cornwallis sent Lieutenant Colonel Banastre Tarleton’s subordinate, Major George Hanger to investigate. Cornwallis ordered Hanger to cautiously enter the town and check for militia, which he expected to be in the area.”

“Contrary to Cornwallis’ orders, Hanger and his cavalry blithely galloped into town. Even after the 20 men behind the house opened fire, Hanger’s men continued to ride on until he was met by heavy fire from the line of militia behind the stone wall.

When the first militia line maneuvered to make way for the second, Hanger misinterpreted their movement as retreat, and continued the charge. This brought him into a withering crossfire from the second line and the cavalry companies stationed to the east and west. Hanger went down with a wound, and his cavalry retreated in some disarray back to the Legion’s infantry.

The British followed them with caution for some miles, and discovered the American camp at Charlotte. Hanger sent his light infantry, commanded by Lieutenant Colonel James Webster, forward to clear out the Americans from their positions along the fences by the road.

Webster’s attack against forced the Americans to leave the fences along the road and fall back to the stone wall. Hanger personnaly led his cavalry against the 20 Continental dragoons. Davie’s troops drove the British back in the first assault. Hanger then led a second cavalry charge againt the stone wall and was again stooped and forced back.

Cornwallis, alerted by the sound of battle, rode forward to assess the situation. Sarcastically calling out “you have everything to lose, but nothing to gain”, he ordered the legion forward once more. By this time, the main army’s light infantry had also begun to arrive, and Davie withdrew his forces.”

“Hanger termed the incident “a trifling insignificant skirmish”, but it did clearly communicate to Cornwallis that he would have to expect further resistance. Hanger then also fell ill, further disabling the effectiveness of Tarleton’s Legion. Instead of advancing on Hillsboro, Cornwallis occupied Charlotte.

His position was never entirely secure, because the Patriot militia interfered with any significant attempts to communicate with the countryside. Cornwallis’ left flank, commanded by Major Patrick Ferguson, was virtually destroyed in early October at Kings Mountain, and Cornwallis eventually withdrew to Winnsboro, South Carolina in November on reports of persistent Patriot militia activity in South Carolina.”