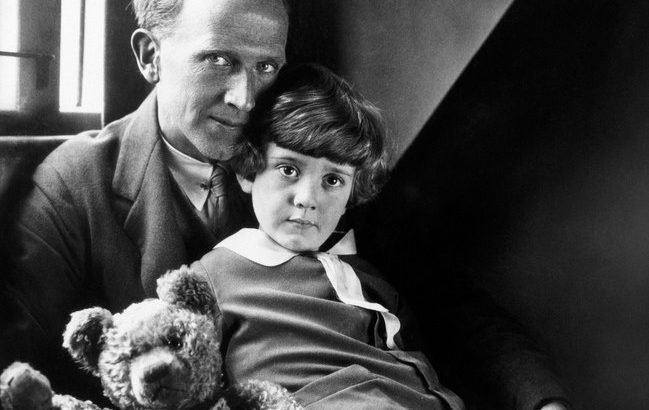 “For months now, I’ve eagerly awaited the première of “Goodbye Christopher Robin,” the film based on the real life of Christopher Robin Milne, the son of A. A. Milne and the basis for the mythical child. I hoped it would restore the simple sweetness of the narrative and the characters, from before they were Disneyfied.

In its many layers, the movie does much more. Pooh is largely a prop for a very adult exploration of the clash between reality and innocence, war and peace, privacy and fame, and parent and child. For all the sunny cinematography and British-esque scenes in the re-created woods of Sussex, the movie is candid about life’s cruelties, as well as the illusions that create much-needed escape.

It is antiwar at its core. A. A. Milne fought in the epic Battle of the Somme, in 1916, when a million men were killed or injured. It was one of the bloodiest battles in human history. Milne, already a playwright and a novelist, was among those wounded. He went home shell-shocked, with all the haunting symptoms of what is today diagnosed as post-traumatic stress disorder, or P.T.S.D. He confused swarming bees with bullets buzzing by him, popping balloons with incoming cannon fire. He was morose and distant.

“What’d we fight that war for? Nothing’s changed,” Milne shouts at his wife, Daphne, early in the film. “I’ve had enough of making people laugh. I want to make them see!” Countries once got together to ban slavery, he points out. “Why can’t we do it with war?””

“When he went off to boarding school, Christopher Robin Milne was never able to escape his name, or the storybook character portrayed by his father. He was taunted and teased and pushed down staircases. Fame produced a different kind of trauma from which he spent much of the rest of his life trying to recover.

When he angrily confronts his father in the film, Milne replies, “You asked me to write a book for you.”

Milne stopped writing Pooh storybooks after completing four, vowing never to write another word about the boy and his bear. “The day will come when everyone will forget Winnie-the-Pooh,” he tells the boy in the film.

It was too late. The popular fiction about their lives irretrievably swallowed them up. Christopher Robin Milne told Gyles Brandreth years later that his father “had got where he was by climbing on my infant shoulders, that he had filched from me my good name and had left me with nothing but the empty fame of being his son.”

In the film, the boy’s nanny tries to placate her ward. “After the war, there was so much sadness that hardly anyone could remember what happiness was like,” she tells him. “Then along came Winnie-the-Pooh, and it was like a tap. He just turned it on, and happiness came out.”

In one of the twists based on real life, Christopher Robin Milne finally escapes his identity by joining the British Army to fight in the Second World War. “I want to sign up,” he plaintively tells his father near the end of the film. “I want to be anonymous.”

He, too, has trouble finding himself upon his return. Now known simply as Christopher, he and his wife end up opening a small bookstore in Devon and doting on their own single child, a daughter named Clare, who has cerebral palsy. In his own memoirs, the younger Milne later came to grips with his childhood. But he refused to partake in the vast profits from his father’s books, or the sales of the franchise to Disney.”