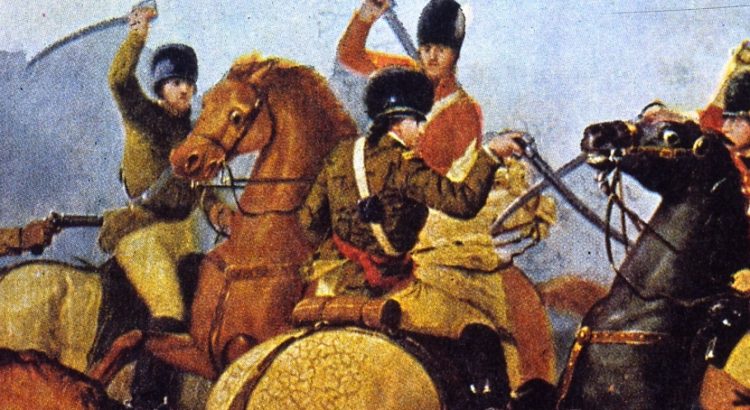 “The Battle of Cowpens1, January 17, 1781, took place in the latter part of the Southern Campaign of the American Revolution and of the Revolution itself. It became known as the turning point of the war in the South, part of a chain of events leading to Patriot victory at Yorktown2 The Cowpens victory was won over a crack British regular army3 and brought together strong armies and leaders who made their mark on history.”

“Into this conflict, General George Washington sent the very capable Nathanael Greene to take command of the Southern army. Against military custom, Greene, just two weeks into his command, split his army, sending General Daniel Morgan southwest of the Catawba River to cut supply lines and hamper British operations in the backcountry, and, in doing so “spirit up the people”. General Cornwallis, British commander in the South, countered Greene’s move by sending Lieutenant Colonel Banastre Tarleton to block Morgan’s actions. Tarleton was only twenty-six, but he was an able commander, both feared and hated – hated especially for his victory at the Waxhaws.11 There, Tarleton was said to have continued the fight against remnants of the Continental Army trying to surrender. His refusal, tradition says, of offering no quarter, led to the derisive term “Tarleton’s Quarter”.

These events set the stage for the Battle of Cowpens. On January 12, 1781, Tarleton’s scouts located Morgan’s army at Grindal Shoals on the Pacolet River12 in South Carolina’s backcountry and thus began an aggressive pursuit. Tarleton, fretting about heavy rains and flooded rivers, gained ground as his army proceeded toward the flood-swollen Pacolet. As Tarleton grew closer, Morgan retreated north to Burr’s Mill on Thicketty Creek.13 On January 16, with Tarleton reported to have crossed the Pacolet and much closer than expected, Morgan and his army made a hasty retreat, so quickly as to leave their breakfast behind. Soon, he intersected with and traveled west on the Green River Road. Here, with the flood-swollen Broad River14 six miles to his back, Morgan decided to make a stand at the Cowpens, a well-known crossroads and frontier pasturing ground.

The term “cowpens“15, endemic to such South Carolina pastureland and associated early cattle industry, would be etched in history. The field itself was some 500 yards long and just as wide, a park-like setting dotted with trees, but devoid of undergrowth, having been kept clear by cattle grazing in the spring on native grasses and peavine16.

There was forage17 at the Cowpens for horses, and evidence of free-ranging cattle for food. Morgan, too, since he had learned of Tarleton’s pursuit, had spread the word for militia18 units to rendezvous at the Cowpens. Many knew the geography some were Overmountain men who had camped at the Cowpens on their journey to the Battle of Kings Mountain.19 Camp was made in a swale between two small hills, and through the night Andrew Pickens’ militia drifted into camp. Morgan moved among the campfires and offered encouragement; his speeches to militia and Continentals alike were command performances. He spoke emotionally of past battles, talked of the battle plan, and lashed out against the British. His words were especially effective with the militia the “Old Waggoner“20 of French and Indian War days and the hero of Saratoga21, spoke their language. He knew how to motivate them even proposing a competition of bravery between Georgia and Carolina units. By the time he was through, one soldier observed that the army was “in good spirits and very willing to fight”. But, as one observed, Morgan hardly slept a wink that night.

Dawn at the Cowpens on January 17, 1781, was clear and bitterly cold. Morgan, his scouts bearing news of Tarleton’s approach, moved among his men, shouting, “Boys, get up! Benny’s22 coming! Tarleton, playing catch up, and having marched his army since two in the morning, ordered formation on the Green River Road for the attack. His aggressive style was made even now more urgent, since there were rumors of Overmountain men on the way, reminiscent of events at Kings Mountain. Yet he was confident of victory: he reasoned he had Morgan hemmed in by the Broad, and the undulating park-like terrain was ideal for his dragoons23. He thought Morgan must be desperate, indeed, to have stopped at such a place. Perhaps Morgan saw it differently: in some past battles, Patriot militia had fled in face of fearsome bayonet charges – but now the Broad at Morgan’s back could prevent such a retreat. In reality, though, Morgan had no choice – to cross the flood-swollen Broad risked having his army cut down by the feared and fast-traveling Tarleton.

Tarleton pressed the attack head on, his line extending across the meadow, his artillery in the middle, and fifty Dragoons on each side. It was as if Morgan knew he would make a frontal assault – it was his style of fighting. To face Tarleton, he organized his troops into three lines. First, out front and hiding behind trees were selected sharpshooters. At the onset of battle they picked off numbers of Tarleton’s Dragoons, traditionally listed as fifteen24, shooting especially at officers, and warding off an attempt to gain initial supremacy. With the Dragoons in retreat, and their initial part completed, the sharpshooters retreated 150 yards or more back to join the second line, the militia commanded by Andrew Pickens. Morgan used the militia well, asking them to get off two volleys and promised their retreat to the third line made up of John Eager Howard’s25 Continentals, again close to 150 yards back. Some of the militia indeed got off two volleys as the British neared, but, as they retreated and reached supposed safety behind the Continental line, Tarleton sent his feared Dragoons after them. As the militia dodged behind trees and parried saber slashes with their rifles, William Washington’s26Patriot cavalry thundered onto the field of battle, seemingly, out of nowhere. The surprised British Dragoons, already scattered and sensing a rout, were overwhelmed, and according to historian Babits, lost eighteen men in the clash. As they fled the field, infantry on both sides fired volley after volley. The British advanced in a trot, with beating drums, the shrill sounds of fifes, and shouts of halloo. Morgan, in response, cheering his men on, said to give them the Indian halloo back. Riding to the front, he rallied the militia, crying out, “form, form, my brave fellows! Old Morgan was never beaten!”

Now Tarleton’s 71st Highlanders27, held in reserve, entered the charge toward the Continental line, the wild wail of bagpipes adding to the noise and confusion. A John Eager Howard order for the right flank to face slightly right to counter a charge from that direction, was, in the noise of battle, misunderstood as a call to retreat. As other companies along the line followed suite, Morgan rode up to ask Howard if he were beaten. As Howard pointed to the unbroken ranks and the orderly retreat and assured him they were not, Morgan spurred his horse on and ordered the retreating units to face about, and then, on order, fire in unison. The firing took a heavy toll on the British, who, by that time had sensed victory and had broken ranks in a wild charge. This event and a fierce Patriot bayonet charge in return broke the British charge and turned the tide of battle. The re-formed militia and cavalry re-entered the battle, leading to double envelopment28 of the British, perfectly timed. British infantry began surrendering en masse.

Tarleton and some of his army fought valiantly on; others refused his orders and fled the field. Finally, Tarleton, himself, saw the futility of continued battle, and with a handful of his men, fled from whence he came, down the Green River Road. In one of the most dramatic moments of the battle, William Washington, racing ahead of his cavalry, dueled hand-to-hand with Tarleton and two of his officers. Washington’s life was saved only when his young bugler29 fired his pistol at an Englishman with raised saber. Tarleton and his remaining forces galloped away to Cornwallis’ camp. Stragglers from the battle were overtaken, but Tarleton escaped to tell the awful news to Cornwallis.

The battle was over in less than an hour. It was a complete victory for the Patriot force. British losses were staggering: 110 dead, over 200 wounded and 500 captured. Morgan lost only 12 killed and 60 wounded, a count he received from those reporting directly to him.

Knowing Cornwallis would come after him, Morgan saw to it that the dead were buried – the legend says in wolf pits — and headed north with his army. Crossing the Broad at Island Ford30, he proceeded to Gilbert Town31, and, yet burdened as he was by the prisoners, pressed swiftly northeastward toward the Catawba River, and some amount of safety. The prisoners were taken via Salisbury32 on to Winchester, Virginia. Soon Morgan and Greene reunited and conferred, Morgan wanting to seek protection in the mountains and Greene wanting to march north to Virginia for supplies. Greene won the point, gently reminding Morgan that he was in command. Soon after Morgan retired from his duty because of ill health- rheumatism, and recurring bouts of malarial fever.”