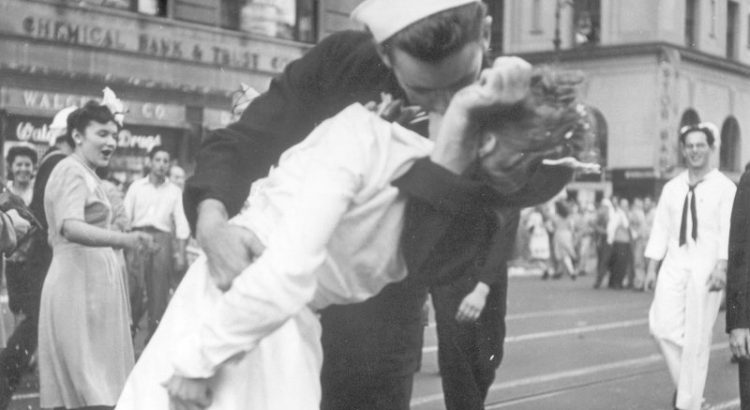 “George Mendonsa, the Navy sailor whose passionate kiss in Times Square symbolized a nation’s exuberance over the end of WWII, has died. He was 95.

The photographer never got the name of the sailor, but Mendonsa claimed it was him, and many experts who analyzed his facial structure came to the same conclusion.

Mendonsa died Sunday after complications from a fall at an assisted living facility in Rhode Island, his daughter told The Providence Journal. He was two days short of his 96th birthday.

The iconic photo on the cover of Life magazine was taken by Alfred Eisenstaedt, and has become one of the most recognizable photos of the 20th century. The same moment was also captured by a Navy photographer, and that version of the image (the one above) is often seen in newspapers as well.”

“”I was watching how the nurses were taking care of the wounded as we were sending them over,” he told the Library of Congress. “And I believe from that day on I had a soft spot for nurses.”

A few months later, fueled by jubilation and a few drinks, Mendonsa walked up to the woman in Times Square.

“It was the uniform she had,” he said. “If that girl did not have a nurse’s uniform on, I honestly believe that I never would have grabbed her.”

Mendonsa didn’t say anything to the woman; he just kissed her. “It happened. She went her way and I went mine.” Why didn’t he ask for her name? “I was with a date,” he said.

His date didn’t mind — in fact, the two went on to marry. Mendonsa didn’t get the name of the woman he kissed. But years later, Greta Zimmer Friedman saw the photo and wrote to the editors of Life to say it was her. In 1980, the Mendonsa and Freidman were reunited when the magazine brought them together for a photo recreation.”