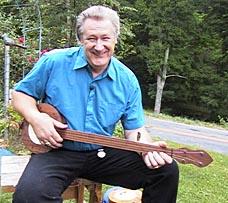 I was saddened to recently learn of the passing of Frank Proffitt, Jr. in 2005. I saw him in multiple documentaries as an older person and assumed he was still living.

From the Watauga Democrat.

“Frank Benjamin Proffitt
Mr. Frank Benjamin Proffitt, 56, of Meat Camp Road, Todd, died Sunday evening, Aug. 7, 2005, at home.
Born in Watauga County Sept. 8, 1946, he was a son of the late Frank Noah and Bessie Mae Hicks Proffitt. Mr. Proffitt was an accomplished musician, playing the banjo, guitar and dulcimer. Frank played throughout North Carolina with the Visiting Artists Program.
Surviving are his wife, Sue Nell Potter Proffitt; one son, Jimmy
Proffitt and wife, Jackie, of Newland; four grandchildren, Ashley
Proffitt, Chase South, and Benjamin and Sidney Proffitt; three
brothers, Ed Proffitt and wife, Paulette, of Vilas, Oliver Proffitt and
wife, Rita, of Colorado Springs, Colo., and Gerald Proffitt and wife,
Joyce, of Granite Falls; and one sister, Phillis Guy and husband, J.D., of Trap Hill, N.C.
In addition to his parents, he was preceded in death by one son, Timmy Proffitt, and one brother, Dr. Ronald Proffitt.
Services will be conducted Wednesday evening at 8 at Austin & Barnes Funeral Home Chapel. Officiating will be the Rev. Kenneth Phipps.
The family will receive friends Wednesday evening prior to the service from 6 until 8 at Austin & Barnes Funeral Home.
Grave side services and burial will be conducted Thursday afternoon at 2 at the Millsaps Cemetery.
Austin & Barnes Funeral Home is serving the Proffitt family.”

Frank Profitt, Jr., as part of the Visiting Artists Program, performed at the college where I taught circa 1980, in front of a small audience in an intimate setting.

Mr. Profitt played the mountain banjo and dulcimer and sang his repertoire of Applachian Songs.

One of the songs, “Tom Dooley”, was based on the true story of Tom Dula and how the lyrics were passed on and ultimately to the Kingston Trio who made it famous.

“Collectors Frank and Anne Warner traveled to Beech Mountain in 1937 and met Frank Proffitt, among others. The Warners recorded Proffitt singing “Tom Dooley” and several other ballads, folk songs, and tunes on the banjo and dulcimer. Alan Lomax published “Tom Dula” in Folk Song USA, and eventually included it in his Folk Songs of North America. It was through a Lomax publication that the Kingston Trio found the song.”

Frank Proffitt, Jr. also played a song I had never heard before, “Four Nights of the Drunk” (my memory of what he called it).

Some years later I was listening to public radio and heard the original British Isles version. I immediately recognized it.

Frank Proffitt, Jr. was one of the nicest, friendliest, most down to earth people I have ever met.

I suppose that only the good die young is true.