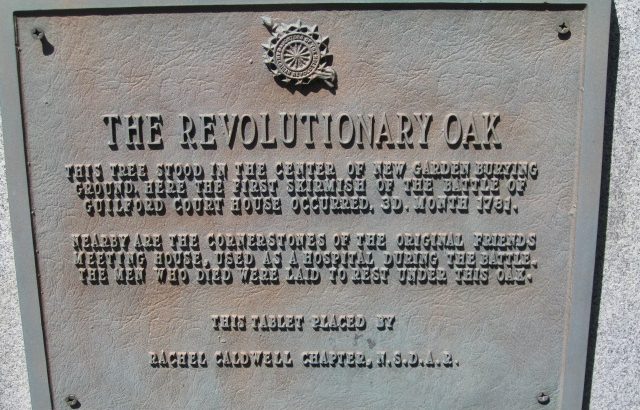 When the backlash from Hurricane Gracie felled the iconic tree Tuesday evening, Sept. 30, 1959, it was estimated to be 450 to 500 years old. Given the dearth of records of that vintage, who knows the exact age of the famous tree?

“Let’s tackle the infamous part first. As former First Lady Eleanor Roosevelt spoke to a racially mixed audience in the Friends meetinghouse (now New Garden Hall) on the campus of Guilford College, vandals set off several charges of dynamite under the roots of the Revolutionary Oak in a failed attempt to bring it down.

Reporter Jim Henderson suggested in the Greensboro Record of June 10, 1955, that while prior blasts may have been just for excitement, this one was probably a salute to Roosevelt’s political persuasion.

Even though Hurricane Gracie did what a Revolutionary War battle and centuries of lightning, sleet, storms, dynamite, and old age could not do, the heritage of the Revolutionary Oak is promulgated to this day.

Pieces of the tree were carved into collection plates for the Friends Meeting. N.C. Gov. Jim Hunt was among government officials presented a gavel made from the Revolutionary Oak.

“A table still used in the New Garden Friends meetinghouse was crafted from the tree by Friends minister and woodworker, Orville Dillon. Rough-sawn planks from the tree were recently discovered in an old chicken house in Alamance County and donated to Guilford College,” according to Dr. Max Carter, a retired Guilford College professor.

Blocks and boards from the tree were advertised for sale by Guilford College Garden Center — telephone 5666 or 4101 — free delivery.

Carter leads several interesting and informative tours of the New Garden Friends Cemetery each year — count on an intriguing tour stop where the Revolutionary Oak once stood.

The Daughters of the American Revolution were the first to recognize the iconic tree in the form of an identification plaque. Additionally, they distributed acorns from the tree to their members and to local schools.”

“But for durable intrigue, the Revolutionary Oak has no match. A good number of British and American soldiers who fought and died from their wounds in a skirmish leading up to the Battle of Guilford Courthouse were buried in common trenches under the massive branches of the shady oak.

Friends’ parishioners cared for the wounded and buried the dead, from both sides — in the center of the cemetery beside their own peace-loving family members — under the shade of the largest oak in the cemetery.”