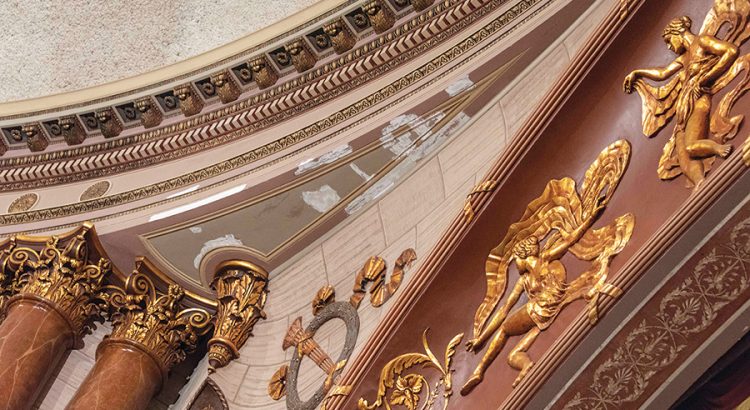 The Carolina Theatre’s stunning renovation is unveiled this month

A couple of months ago I toured the Carolina Theatre with Executive Director Brian Gray while construction was fully underway for their $2.5 million renovation and restoration project, slated for completion this month. It’s a floor-to-ceiling facelift of this former vaudeville theater. When I was there, all the seating had been removed and more than a dozen workers were pouring cement and installing new floor lighting.

“What we did to prioritize the work was we did surveys of our audiences, our guests,” Gray notes. “‘What do you like? What can we do better?’ And we heard back from hundreds of people.” The number one thing folks requested was additional ladies’ restrooms. “Number two were the seats and number three was the wait at the concession stand. So these are the things we addressed.”

The bathrooms were few, the ones on the second floor, small, so an addition was made to the north side of the building to accommodate an expansive ladies’ room on the first floor.

Seating in the auditorium was left over from 1969 when the Terrace Theatre converted from one screen to two. That’s when their famous rocking-chair seats were installed at the Carolina. “They were old and uncomfortable,” Gray says. “The new chairs are wider and they don’t rock. With a little creative ingenuity we actually added a row and there’s still the same amount of walking space between the rows.””

“If you’ve noticed more big-name entertainers playing the Carolina lately, there’s a reason. For the last few years management has been partnering with outside promoters who can book up to 20 acts for a season. “They’ve brought in higher recognition acts and it’s been a financial boon for the theater,” Gray explains. One of those marquee performers in 2018 was soul singer Gladys Knight, “She was wonderful. She’s 70-something years old, she never sat down.” That show sold out, “It was a really wonderful night for the theater.””

“The Carolina Theatre, originally billed as “The Showplace of the Carolinas,” opened on Halloween night in 1927 as a 2,200-seat vaudeville theater. Mayor Paul Lindley was issued the first ticket and joined opening night crowds in exclaiming over the glittering crystal chandeliers, gilded railings, marbled columns, and classical statues. The Carolina was considered to be the finest theater between Washington D.C. and Atlanta.

The most monumental structure of its type ever built in Greensboro, the Carolina’s terracotta façade is in a Greek temple design with its embellishments painted in bright greens, reds, and golds. Tall windows between the columns light the floors above the lobby, which were intended to be the regional headquarters of the Publix-Saenger Theater Corporation until the Depression struck. The Carolina was also Greensboro’s first commercial building to be air conditioned.

The opulent décor was designed to provide the ordinary citizen with an experience of sheer fantasy. Uniformed ushers greeted patrons passing through the vast and elegant lobby and under handsome archways into the auditorium where clouds were projected onto a sky-blue, domed ceiling above the ornamental columns and draperies reminiscent of a Greek amphitheatre. Even during the Depression, the cost for an evening of entertainment was affordable at $0.75 for an adult and $0.50 for a child at this luxury theater.

Operated as a part of the Keith Vaudeville chain, the Theatre’s early programs featured live performing acts, the Carolina Theatre Orchestra, the Carolina News newsreel, an audience sing-along, and a silent film accompanied by the impressive Robert Morton theatre pipe organ. Vaudeville’s days were numbered, however, with the introduction of sound in movies. In 1928, the Carolina became the first theater in the state to install the new Vitaphone speakers, and crowds flocked to see films five times daily. For the next 30 years, this Downtown movie palace was a hub of Greensboro nightlife. Continuing the trend, the Saturday morning Circle K Club was introduced after World War II and entertained a generation of local children.”