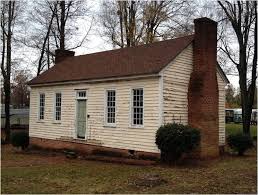 “The Asheboro Female Academy is back in the education business.

The two-room schoolhouse, which opened in 1839, has been standing on Walker Avenue, largely forgotten, since it was moved from its previous location at Fayetteville and Salisbury streets in 1976.

An effort more than two years old to refurbish the little structure, which in January 2016 was added to the list of Randolph County historic sites, is nearing completion. The goal was to bring “period accuracy” to the 18.5-foot-by-36-foot building erected two decades before the Civil War (and used as barracks during the war).

The original budget for a basic overhaul was $38,000. Thanks to an outpouring of support, and especially generous gifts from The Timken Foundation and the Edward M. Armfield Foundation, the result is much finer — a nearly $100,000 investment so far — with upgrades that include a split cedar shake roof, reglazed windows that look brand new (for 1839).

Unobtrusive modern touches of wi-fi, a flat-screen TV hidden in a recess behind a mantel, and heating and air conditioning make the historic structure user-friendly for a 21st-century audience, young and old.

Kathie Thompson, who retired as vice president of design/creative services for the Alderman Company in High Point a couple of years ago, lent her design expertise to the renovation. She did extensive research to get details right.

“It’s a passion for me to see this preserved,” she said in a recent interview, “because it is the oldest historic structure in Asheboro and the second oldest in Randolph County. So it’s very important to use this as a teaching tool for our schoolchildren — and use it as a living, learning, historic classroom.”

Dr. Terry Worrell seconds that notion. The superintendent of the Asheboro City Schools was with a small group of schoolchildren in summer camp who got a sneak peak a few weeks ago. The children sat at desks built to mimic those from the 19th century and listened to a brief history lesson of the place and time.”

“An announcement in the Feb. 8, 1839 edition of an Asheboro newspaper called The Southern Citizen heralded an educational leap forward for women.

The friends of female education (and we hope they are many) in this section will be gratified to learn that the citizens have agreed and pledged and obligated themselves to erect a Female Academy. A suitable building to be commenced forthwith.

As the benefits to be derived will extend through a section heretofore destitute, and considering that we are mostly mechanics and merchants of moderate capital and limited income — consequently not well prepared to raise funds for public enterprise, it is confidently hoped and believed that our fellow citizens in this and neighboring counties will be pleased to extend to us such aid as may be within their power.

A Male Academy already stood at the corner of Fayetteville and Academy Streets.

Col. Benjamin Elliott donated $400 and an acre of land to build the schoolhouse for girls at the present-day location of BNC Bank. The two-room school opened four months later, on June 17.

Students received instruction in spelling, reading, arithmetic and history, as well as music and the making of wax flowers and fruit. An August 1960 segment in Southern Architect magazine featured the building: “The city’s first piano was bought for the Female Academy,” the article said, “and music was an important part of the genteel pursuits in which the students were instructed.”

Tuition in spelling and reading was $6 for a five-month term; $7 for arithmetic and history; $8 for grammar and geography; $10 for philosophy and history; and $20 for music. Some city residents opened their homes to boarders for $6 a month.

Within a year, the number of students enrolled necessitated hiring an assistant teacher, and the “infant class” was moved to the nearby Methodist Church. Miss Eliza Rae of Boston was the first teacher; the academy also employed a succession of teachers from the then-famed Troy Female Academy in Troy, N.Y.”