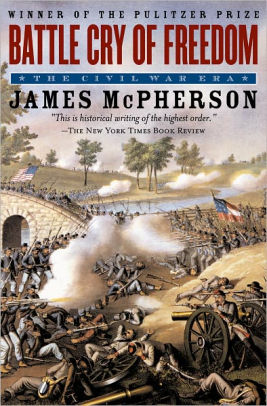 From Battle Cry of Freedom The Civil War Era

“Prologue
From the Halls of Montezuma”

“On the morning of September 14, 1847, brilliant sunshine burned off the haze in Mexico City. A mild breeze sprang up to blow away the smell of gunpowder lingering from the bloody battle of Chapultepec. Unshaven, mud-stained soldiers of the United States army in threadbare uniforms marched into the Plaza de Armas, formed a ragged line, and stood at weary attention as a shot-torn American flag rose over the ancient capital of the Aztecs. Civilians looked on in disappointed wonder. Were these tattered gringoes the men who had vanquished the splendid hosts of Santa Anna?

Martial music suddenly blared from a street entering the plaza. Jaunty dragoons with drawn sabers cantered into the square escorting a magnificent bay charger ridden by a tall general resplendent in full-dress uniform with gold epaulets and white-plumed chapeau. The Mexicans broke into involuntary applause. If they must endure the humiliation of conquest, they preferred their conquerors to look the part. As the band played Yankee Doodle and Hail to the Chief, General Winfield Scott dismounted and accepted formal surrender of the city. Cross-belted U.S. marines soon patrolled the Halls of Montezuma while at nearby Guad-alupe Hidalgo the American envoy Nicholas Trist negotiated a treaty that enlarged the territory of the United States by nearly one-quarter and reduced that of Mexico by half. During the sixteen previous months, American forces under Generals Scott and Zachary Taylor had won ten major battles, most of them against larger Mexican armies defending fortified positions. The Duke of Wellington had pronounced Scott’s campaign against Mexico City the most brilliant in modern warfare.

But ironies and squabbles marred the triumphs. The war had been started by a Democratic president in the interest of territorial expansion and opposed by Whigs whose antiwar position helped them wrest control of the House in the congressional elections of 1846. Yet the two commanding generals in this victorious war were Whigs. Democratic President James K. Polk relieved Whig General Scott of command after Scott had ordered the court-martial of two Democratic generals who had inspired newspaper articles claiming credit for American victories. The president recalled his own envoy for appearing to be too soft toward the Mexicans; Trist ignored the recall and negotiated a treaty which obtained all of Mexico that Polk had hoped for originally but less than he now wanted. Polk nevertheless sent the treaty to the Senate, where a combination of Whigs who wanted no Mexican territory and Democrats who wanted more came within four votes of defeating it. The antiwar party nominated war hero Zachary Taylor for president in 1848 and won; the same party nominated war hero Winfield Scott for president four years later and lost. Congressmen from northern states tried to enact a proviso banning slavery from the territories acquired by a war in which two-thirds of the volunteer soldiers had come from slave states. General Taylor was a slaveholder but opposed the expansion of slavery when he became president. The discord generated by the Mexican War erupted fifteen years later in a far larger conflict whose foremost hero was elected president two decades after he, as Lieutenant Sam Grant, had helped win the decisive battle of Chapultepec in a war that he considered “one of the most unjust ever waged by a stronger against a weaker nation.”1

The bickering Americans won the Mexican War because their adversaries were even more riven by faction. They won also because of the marksmanship and elan of their mixed divisions of regulars and volunteers and above all because of the professionalism and courage of their junior officers. Yet the competence of these men foreshadowed the ultimate irony of the Mexican War, for many of the best of them would fight against each other in the next war. Serving together on Scott’s staff were two bright lieutenants, Pierre G. T. Beauregard and George B. McClellan. Captain Robert E. Lee’s daring reconnaissances behind Mexican lines prepared the way for two crucial American victories. In

one of his reports Captain Lee commended Lieutenant Grant. The latter received official thanks for his role in the attack on Mexico City; these thanks were conveyed to him by Lieutenant John Pemberton, who sixteen years later would surrender to Grant at Vicksburg. Lieutenants James Longstreet and Winfield Scott Hancock fought side by side in the battle of Churubusco; sixteen years later Longstreet commanded the attack against Hancock’s corps at Cemetery Ridge, an attack led by George Pickett, who doubtless recalled the day that he picked up the colors of the 8th Infantry in its assault on Chapultepec when Lieutenant Longstreet fell wounded while carrying these colors. Albert Sidney Johnston and Joseph Hooker fought together at Monterrey; Colonel Jefferson Davis’s Mississippi volunteers broke a Mexican charge at Buena Vista while artillery officers George H. Thomas and Braxton Bragg fought alongside each other in this battle with the same spirit they would fight against each other as army commanders at a ridge a thousand miles away in Tennessee. Lee, Joseph E. Johnston, and George Gordon Meade served as Scott’s engineer officers at the siege of Vera Cruz, while offshore in the American fleet Lieutenant Raphael Semmes shared a cabin with Lieutenant John Winslow, whose U.S.S. Kearsarge would sink Semmes’s C.S.S. Alabama seventeen years later and five thousand miles away.

The Mexican War fulfilled for the United States its self-proclaimed manifest destiny to bestride the continent from sea to shining sea. But by midcentury the growing pains of this adolescent republic threatened to tear the country apart before it reached maturity.”