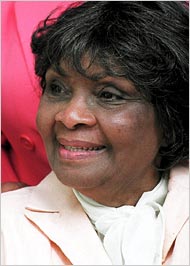 “Irene Morgan Kirkaldy, whose defiance of white supremacy while traveling through the Upper South in the summer of 1944 led to a Supreme Court decision outlawing segregated seating on interstate bus lines, died Friday in Hayes, Va. She was 90.

The cause was complications of Alzheimer’s disease, said her granddaughter Janine Bacquie.

Irene Morgan’s fight against segregation took place a decade before the modern civil rights movement changed America. Taken up by the N.A.A.C.P. and argued before the Supreme Court by Thurgood Marshall, later the court’s first black justice, it proved a forerunner to Rosa Parks’s storied refusal to yield her seat on a city bus in Montgomery, Ala.

Mrs. Morgan, a worker in a plant that made World War II bombers and the mother of two small children, was returning to her home in Baltimore aboard a Greyhound bus in July 1944 after a visit to her mother in Gloucester County, Va.

When the bus grew crowded, the driver told her to give her seat to a white person. Mrs. Morgan refused, and when a sheriff’s deputy tried to take her off the bus in Saluda, Va., she resisted.

“He put his hand on me to arrest me, so I took my foot and kicked him,” she recalled in “You Don’t Have to Ride Jim Crow!” a 1995 public television documentary. “He was blue and purple and turned all colors. I started to bite him, but he looked dirty, so I couldn’t bite him. So all I could do was claw and tear his clothes.”

Mrs. Morgan was arrested and pleaded guilty the next October to resisting arrest, paying a $100 fine. But she refused to pay a $10 fine for violating a Virginia law requiring segregated seating in public transportation.

She appealed, and the N.A.A.C.P., seeking a test case over segregated interstate transport, represented her.

“She was young, attractive, articulate and, judging by her poised performance in Saluda, strong enough to withstand the pressures of a high-profile legal battle,” Raymond Arsenault wrote in his book “Freedom Riders.”

When Virginia’s highest court ruled against Mrs. Morgan, the N.A.A.C.P. appealed to the Supreme Court. Mr. Marshall and his fellow N.A.A.C.P. lawyer, William Hastie, argued that segregation aboard interstate buses — Mrs. Morgan’s bus was traveling from Virginia to Maryland — represented an unconstitutional burden on the power of Congress to regulate interstate commerce and that it threatened free movement across state lines.

The N.A.A.C.P. brief in Morgan v. Virginia stated that “we are just emerging from a war in which all of the people of the United States were joined in a death struggle against the apostles of racism.”

On June 3, 1946, the Supreme Court ruled 6 to 1 in favor of Mrs. Morgan. Justice Stanley F. Reed wrote that “seating arrangements for the different races in interstate motor travel require a single uniform rule to promote and protect national travel.””