Abraham Lincoln relates story of his mother being illegitimate daughter of Lucy Hanks and well-bred Virginia farmer or planter, “Lincoln the Unknown” by Dale Carnegie 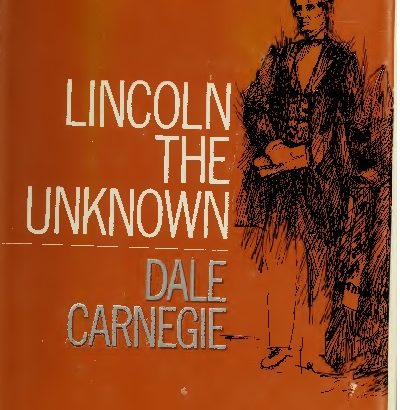 Abraham Lincoln relates story of his mother being illegitimate daughter of Lucy Hanks and well-bred Virginia
farmer or planter, “Lincoln the Unknown” by Dale Carnegie

From “Lincoln the Unknown” by Dale Carnegie.

“William H. Herndon was Lincoln’s law partner for twentyone
years. He probably knew Lincoln better than any other
man who ever lived. Fortunately, he wrote a three-volume biography
of Lincoln that appeared in 1888. It is one of the most
important of the multitude of works on Lincoln. I quote now
from pages 3 and 4 of Volume I:

‘On the subject of his ancestry and origin I only remember
one time when Mr. Lincoln ever referred to it. It was
about 1850, when he and I were driving in his one-horse
buggy to the court in Menard county, Illinois. The suit we
were going to try was one in which we were likely, either
directly or collaterally, to touch upon the subject of hereditary
traits. During the ride he spoke, for the first time in
my hearing, of his mother, dwelling on her characteristics,
and mentioning or enumerating what qualities he inherited
from her. He said, among other things, that she was the
illegitimate daughter of Lucy Hanks and a well-bred Virginia
farmer or planter; and he argued that from this last
source came his power of analysis, his logic, his mental
activity, his ambition, and all the qualities that distinguished
him from the other members and descendants of
the Hanks family. His theory in discussing the matter of
hereditary traits has been, that, for certain reasons, illegitimate
children are oftentimes sturdier and brighter than
those born in lawful wedlock; and in his case, he believed
that his better nature and finer qualities came from this
broad-minded, unknown Virginian. The revelation—painful
as it was—called up the recollection of his mother, and,
as the buggy jolted over the road, he added ruefully, “God
bless my mother; all that I am or ever hope to be I owe
to her,” and immediately lapsed into silence. Our interchange
of ideas ceased, and we rode on for some time
without exchanging a word. He was sad and absorbed.
Burying himself in thought, and musing no doubt over the
disclosure he had just made, he drew round him a barrier
which I feared to penetrate. His words and melancholy
tone made a deep impression on me. It was an experience
I can never forget.'”