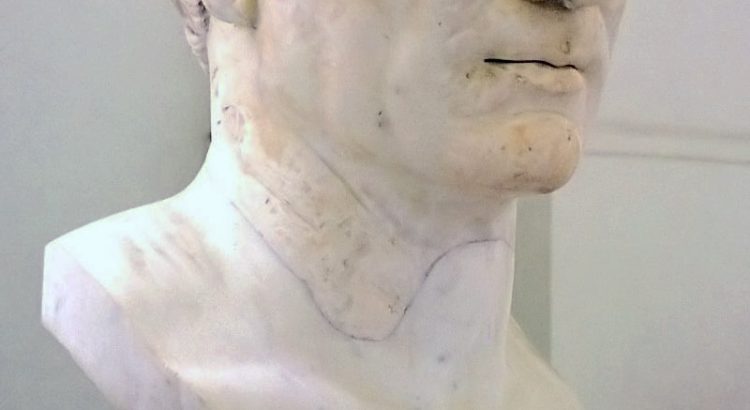 Today is March 15, 2018, so I immediately thought of Shakespeare’s Julius Caesar, “Beware the Ides of March.”

Did Shakespeare make this up? No.

At least by AD 121 it was stated in Gaius Suetonius Tranquillus’ “De vita Caesarum”, commonly known as  The twelve Caesars.

The Life of Julius Caesar

“81 [Legamen ad paginam Latinam] 1 Now Caesar’s approaching murder was foretold to him by unmistakable signs. A few months before, when the settlers assigned to the colony at Capua by the Julian Law were demolishing some tombs of great antiquity, to build country houses, and plied their work with the greater vigour because as they rummaged about they found a quantity of vases of ancient workmanship, there was discovered in a tomb, which was said to be that of Capys, the founder of Capua, a bronze tablet, p109 inscribed with Greek words and characters to this purport: “Whenever the bones of Capys shall be moved, it will come to pass that a son of Ilium shall be slain at the hands of his kindred, and presently avenged at heavy cost to Italy.” 2 And let no one think this tale a myth or a lie, for it is vouched for by Cornelius Balbus, an intimate friend of Caesar. Shortly before his death, as he was told, the herds of horses which he had dedicated to the river Rubicon when he crossed it, and had let loose without a keeper, stubbornly refused to graze and wept copiously. Again, when he was offering sacrifice, the soothsayer Spurinna warned him to beware of danger, which would come not later than the Ides of March; 3 and on the day before the Ides of that month a little bird called the king-bird flew into the Hall of Pompeyg with a sprig of laurel, pursued by others of various kinds from the grove hard by, which tore it to pieces in the hall. In fact the very night before his murder he dreamt now that he was flying above the clouds, and now that he was clasping the hand of Jupiter; and his wife Calpurnia thought that the pediment72 of their house fell, and that her husband was stabbed in her arms; and on a sudden the door of the room flew open of its own accord.

4 Both for these reasons and because of poor health he hesitated for a long time whether to stay at home and put off what he had planned to do in the senate; but at last, urged by Decimus Brutus not to disappoint the full meeting which had for some time been waiting for him, he went forth almost at the end of the fifth hour; and when a note revealing the plot was handed him by someone on the way, he p111 put it with others which he held in his left hand, intending to read them presently. Then, after several victims had been slain, and he could not get favourable omens, he entered the House in defiance of portents, laughing at Spurinna and calling him a false prophet, because the Ides of March were come without bringing him harm; though Spurinna replied that they had of a truth come, but they had not gone.

82 [Legamen ad paginam Latinam] 1 As he took his seat, the conspirators gathered about him as if to pay their respects, and straightway Tillius Cimber, who had assumed the lead, came nearer as though to ask something; and when Caesar with a gesture put him off to another time, Cimber caught his toga by both shoulders; then as Caesar cried, “Why, this is violence!” one of the Cascas stabbed him from one side just below the throat.73 2 Caesar caught Casca’s arm and ran it through with his stylus,74 but as he tried to leap to his feet, he was stopped by another wound. When he saw that he was beset on every side by drawn daggers, he muffled his head in his robe, and at the same time drew down its lap to his feet with his left hand, in order to fall more decently, with the lower part of his body also covered. And in this wise he was stabbed with three and twenty wounds, uttering not a word, but merely a groan at the first stroke, though some have written that when Marcus Brutus rushed at him, he said in Greek, “You too, my child?”h 3 All the conspirators made off, and he lay there lifeless for some time, and finally three common slaves put him on a litter and carried him home, with one arm hanging down. And of so many wounds none turned out to be mortal, in the opinion of the p113 physician Antistius, except the second one in the breast.”