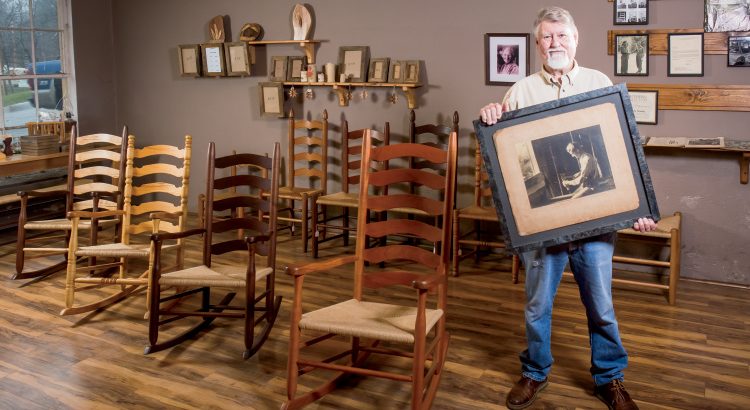 From NC Field and Family Spring 2018.

“Sixth-generation chairmaker Jimmy Woody can remember working in his family’s Western North Carolina chair shop as a young boy, sweeping the wood shavings away for a dime. It was a chore Jimmy’s own sons, Brian and Scott, would one day tackle as well.

“They worked in the shop just like I did as a youngster,” Jimmy says.

Since the early 1800s, the Woody family has been renowned for chairmaking not only in North Carolina, but around the world. Today, Jimmy continues to operate Woody’s Chair Shop in Mitchell County, which he inherited from his uncles, Arval and Walter Woody.

Jimmy’s third cousin, Max Woody, also owns a chair shop in McDowell County. Max, who is nearing 90, has been making chairs for more than 65 years. Both men produce handmade chairs using a Colonial American method, with no nails, screws or glue in the structural part of the chair.

“The early colonists didn’t have the material resources to make furniture like they had seen in Europe, so they had to use the moisture content of wood to put chairs together,” Jimmy explains. “Some parts of the chair are air-dried green wood with a higher moisture content, while other parts are kiln-dried. When you drive the two types of wood together, the wetter wood begins to shrink up, which makes the chair almost indestructible when it’s fully assembled. It’s an art form that’s purely Americana – the shrinking of higher-moisture wood onto dried wood of the same species.”

Decades ago, Arval and Walter Woody’s chair shop became quite well-known after the family donated a rocking chair to former President John F. Kennedy, who suffered from back pain.

“A very short time later, the White House staff called to see if we could make the Kennedy children some chairs, because they spent so much time in his,” Woody says. “So we did.”

Replicas of the Kennedy children’s rockers are still very popular, especially among grandparents. The chairs remained in the White House during Kennedy’s presidency and are now in the John F. Kennedy Presidential Library. Woody chairs can also be found in the Smithsonian Institution, as well as in the homes of governors, senators and a member of Great Britain’s Parliament.

“My father’s brothers really made the shop into what it is today,” Jimmy says. “Uncle Arval was named a North Carolina Living Treasure for his craft in chairs. I worked with him while I was in college, and he and Walter taught me the business.””