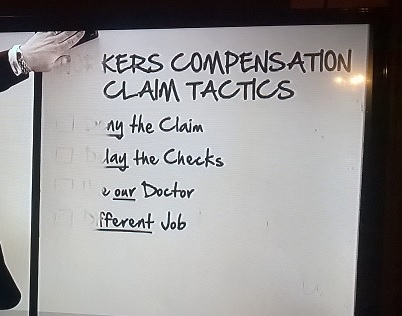 “Faced with the daunting prospect of buying life insurance, many Americans turn to someone they believe they can trust: a representative of a fraternal organization, often associated with their church.

But the people who own such policies, or are considering buying one, may be unaware that these organizations, such as Thrivent Financial for Lutherans or Woodmen of the World Life Insurance Society, play by different rules than other insurers — rules that critics say can put buyers at a disadvantage.

A series of disputes involving some of the biggest fraternal benefit societies, which together have millions of clients, underscores the problems that consumers can encounter with these policies. Unlike other insurance companies, fraternal organizations can unilaterally — and retroactively — change many terms of their policies. State courts and regulators have recognized these organizations’ right to operate under different rules, and an effort by Missouri regulators to rein in one of them was rejected by a state court there in 2004.

George and Lucy Tiedemann discovered they had fewer legal rights than other kinds of policyholders when they tried to sue Thrivent. Devout Lutherans, the Niceville, Fla., couple never considered buying life insurance from anyone but the Aid Association for Lutherans, which became Thrivent after it merged with the Lutheran Brotherhood in 2001. But the policies proved far costlier than their sales agent represented, they say, because of overoptimistic projections the agent made in marketing the policies.

Thrivent denies any wrongdoing. Mr. Tiedemann’s dissatisfaction is “an aberration,” says Paul Kelash, a Thrivent spokesman. As a fraternal organization that exists only to serve its members, their families and their communities, Thrivent has always acted in their best interests, he says.

Founded as self-governing support networks a century or more ago, some fraternal groups have strong church ties, such as Thrivent or, for Catholics, the Knights of Columbus. Others, such as Woodmen of the World and the separate Modern Woodmen of America, are essentially secular, with broader community-service missions. Altogether they claim about 10 million members. Unlike other not-for-profit groups that often sell insurance to members, such as alumni organizations or professional associations, fraternal insurers actually issue much of the insurance they sell.

Like other insurers, fraternal groups are regulated by the states. Although a relatively small slice of the market, collecting less than 2% of total U.S. life- and health-insurer premiums in 2004, they took in nearly $6.7 billion in premiums that year, according to insurance-ratings service A.M. Best Co.”

“The insurance the Tiedemanns bought in 1993 didn’t restrict their ability to sue over disputes. But in 1999 Aid Association for Lutherans amended its bylaws, effectively blocking policyholders from the courts and substituting a three-step dispute-resolution process.

For members who have found themselves in disputes with Thrivent, the retroactive change rankles. “You’re wondering how Lutheran organizations can treat their own customers that way,” says Mr. Tiedemann, an 83-year-old retiree who navigated the dispute-resolution process for more than two years before giving up. The couple is maintaining Lucy Tiedemann’s policy, who is recovering from a recent fall.”