Booker T. Washington early life & education, Born into slavery in Virginia, Got up nearly every morning at 4 AM to practice and study, Walked 500 miles to Hampton Normal Agricultural Institute, Janitor until scholarship 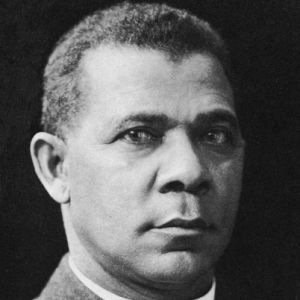 Booker T. Washington early life & education, Born into slavery in Virginia, Got up nearly every morning at 4 AM to practice and study, Walked 500 miles to Hampton Normal Agricultural Institute, Janitor until scholarship

Born to a slave on April 5, 1856, Booker Taliaferro Washington’s life had little promise early on. In Franklin County, Virginia, as in most states prior to the Civil War, the child of a slave became a slave. Booker’s mother, Jane, worked as a cook for plantation owner James Burroughs. His father was an unknown white man, most likely from a nearby plantation. Booker and his mother lived in a one-room log cabin with a large fireplace, which also served as the plantation’s kitchen.

At an early age, Booker went to work carrying sacks of grain to the plantation’s mill. Toting 100-pound sacks was hard work for a small boy, and he was beaten on occasion for not performing his duties satisfactorily. Booker’s first exposure to education was from the outside of a school house near the plantation; looking inside, he saw children his age sitting at desks and reading books. He wanted to do what those children were doing, but he was a slave, and it was illegal to teach slaves to read and write.

After the Civil War, Booker and his mother moved to Malden, West Virginia, where she married freedman Washington Ferguson. The family was very poor, and nine-year-old Booker went to work in the nearby salt furnaces with his stepfather instead of going to school. Booker’s mother noticed his interest in learning and got him a book from which he learned the alphabet and how to read and write basic words. Because he was still working, he got up nearly every morning at 4 a.m. to practice and study. At about this time, Booker took the first name of his stepfather as his last name, Washington.

In 1866, Booker T. Washington got a job as a houseboy for Viola Ruffner, the wife of coal mine owner Lewis Ruffner. Mrs. Ruffner was known for being very strict with her servants, especially boys. But she saw something in Booker—his maturity, intelligence and integrity—and soon warmed up to him. Over the two years he worked for her, she understood his desire for an education and allowed him to go to school for an hour a day during the winter months.”

In 1872, Booker T. Washington left home and walked 500 miles to Hampton Normal Agricultural Institute in Virginia. Along the way he took odd jobs to support himself. He convinced administrators to let him attend the school and took a job as a janitor to help pay his tuition. The school’s founder and headmaster, General Samuel C. Armstrong, soon discovered the hardworking boy and offered him a scholarship, sponsored by a white man. Armstrong had been a commander of a Union African-American regiment during the Civil War and was a strong supporter of providing newly freed slaves with a practical education. Armstrong became Washington’s mentor, strengthening his values of hard work and strong moral character.

Booker T. Washington graduated from Hampton in 1875 with high marks. For a time, he taught at his old grade school in Malden, Virginia, and attended Wayland Seminary in Washington, D.C. In 1879, he was chosen to speak at Hampton’s graduation ceremonies, where afterward General Armstrong offered Washington a job teaching at Hampton. In 1881, the Alabama legislature approved $2,000 for a “colored” school, the Tuskegee Normal and Industrial Institute (now known as Tuskegee University). General Armstrong was asked to recommend a white man to run the school, but instead recommended Booker T. Washington. Classes were first held in an old church, while Washington traveled all over the countryside promoting the school and raising money. He reassured whites that nothing in the Tuskegee program would threaten white supremacy or pose any economic competition to whites.”