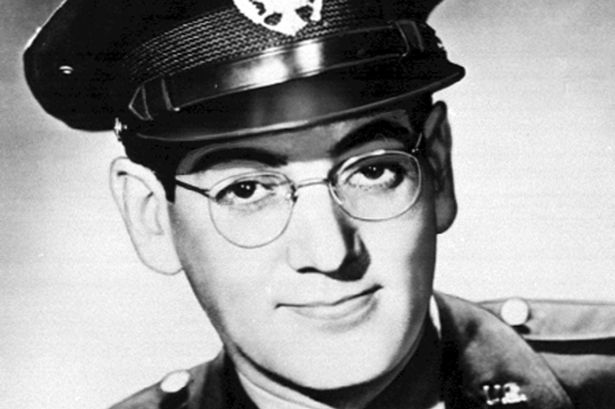 “Although U.S. Army Air Forces Major Alton Miller was awarded a posthumous bronze star during World War II, most folks aren’t familiar with the name. Miller was 37 and married with two children when he enlisted — beyond reach of the draft — and working in an occupation critical to the nation’s defense.

Perhaps because most of his high school energies went toward the trombone and football, he flunked three of his five classes at the University of Colorado. He still counted college as a success, inasmuch as he met and married a UC coed, Helen Burger.

His military career path was as sketchy as his childhood. He attempted to join the Navy but was turned down. He was accepted by the Army on Oct. 8, 1942. However, December 1942 found him at Maxwell Field in Montgomery, Ala., as a special services officer — in the U.S. Army Air Forces.

Major Miller went missing in action on Dec. 15, 1944, but the public wasn’t informed until December 24, 1944 — concurrent, but unrelated, to another event across the English Channel — the Battle of the Bulge.”

“He took his newly-formed 50-piece USAAF band to England in the summer of 1944, where they gave over 800 performances for homesick GIs. Miller’s music was carried by the Armed Forces Radio Network and British Broadcasting Company.

“Next to a letter from home, that (Miller’s music) was the greatest morale builder in the European Theater of Operations,” Gen. Jimmy Doolittle said.

On Dec. 15, 1944, Miller left England for Paris aboard a small Army aircraft. He planned to make travel and logistical arrangements for his entire band to record a performance in Paris to be broadcast on Christmas Day.

Instead, both The New York Times and Greensboro Daily News ran this news item on Christmas Day, 1944: “Major Glenn Miller, director of the USAAF Band, is missing on a flight from England to Paris … no trace of the plane has been found.”

As to what really happened to Glenn Miller continues to be open season for history revisionists.”

WES: IT’S A STORY ABOUT THE SO-CALLED FRIENDLY FIRE THEORY.  IN THE MID 1980’S A FORMER ROYAL AIR FORCE NAVIGATOR FRED SHAW MADE THE EXTRAORDINARY CLAIM THAT HE MAY HAVE SEEN GLENN MILLER DIE.

WES:  SHAW SAID A BRITISH LANCASTER HAD DROPPED ITS BOMBS OVER THE ENGLISH CHANNEL AND THAT ONE HAD DESTROYED A C-64 NORSEMAN.  THE SAME KIND OF PLANE THAT GLENN MILLER HAD BEEN FLYING. IT SEEMS A LEADING BRITISH RESEARCHER NAMED ROY NESBIT HAD INVESTGATED. THIS MAY BE OUR FIRST SOLID LEAD

WES: I do think that, uh, it’s worth looking at the…this theory of friendly fire.  That the RAF accidentally dropped bombs on Miller’s plane

TUKUFU: WORKING WITH THE INFORMATION WES UNCOVERED, I’VE TRACKED DOWN ROY NESBIT IN THE TOWN OF SWINDON, ABOUT 80 MILES WEST OF LONDON.

TUKUFU: When the war broke out, I was just eighteen years old.

TUKUFU: ROY IS A FORMER RAF NAVIGATOR WHO FLEW SOME 50 MISSIONS. HE SAYS THAT SOME FORTY YEARS AFTER MILLER VANISHED; THE BRITISH MINISTRY OF DEFENSE HAD BEEN ALERTED THAT THEY MIGHT HAVE ACCIDENTALLY KILLED HIM.

Roy:  They had received a report, emanating from South Africa, that the navigator in Avro Lancaster returning from an aborted raid had seen the Norseman dive into the sea in what was called the Southern Jettison area.

Roy:  Yes, he saw, so he said, this Norseman dive into the sea.

TUKUFU: ACCORDING TO NESBIT, THE HISTORICAL BRANCH OF THE ROYAL AIRFORCE, QUIETLY SUGGESTED HE INVESTIGATE.

Roy:  They thought I might be able to answer it, um, because I’d been a navigator during the war.  I was familiar with the research in the Public Record Office

TUKUFU: THE BRITISH AUTHORITIES WERE CONCERNED. THE IDEA THAT THEY MIGHT HAVE ACCIDENTALLY KILLED AMERICA’S LEADING MUSICAL CELEBRITY WAS STILL POTENTIALLY EMBARRASING.

ROY: I think they wanted to get it off their backs quite frankly —

FRED SHAW: This was…

TUKUFU: THE ALLEGED EYE-WITNESS FRED SHAW WAS LIVING IN SOUTH AFRICA.  THE INVESTIGATOR, ROY NESBITT, ARRANGED FOR HIM TO BE INTERVIEWED ON CAMERA.  SHAW DESCRIBED HOW THAT DECEMBER 15TH HIS 4-ENGINED AVRO LANCASTER HAD SET OUT TO BOMB THE GERMAN CITY OF SIEGEN. BUT THE WEATHER HAD BEEN TERRIBLE, AND THE OPERATION WAS ABORTED MID-FLIGHT.

FRED SHAW: Anyway we turned around. The whole stream of Lancasters. There were well over a hundred.

TUKUFU:  THE LANCASTER NEEDED TO GET RID OF ITS BOMBS BEFORE IT COULD LAND AND SHAW WAS CURIOUS.

FRED SHAW:  Now I’d never seen a bomb explode from the air before, so I left my seat, and put my head into the little observation blister.  From where I could look vertically downwards.

Roy:  It’s a very big bomb indeed. It was designed to blast all the buildings.

TUKUFU: THIS WAS A DAYLIGHT RAID AND SHAW WANTED TO WATCH AS THE BIG BOMBS WERE JETTISONED.

FRED SHAW: Now, just before we dropped our load, my bomb aimer called up and said “They’re going to off. They’re exploding”

FRED SHAW: And  there sure enough, the cookies, were exploding.  And i could see the blast waves radiating outwards like shimmering gray circles.

TUKUFU: SHAW SAID HE WAS STUNNED AT WHAT HAPPENED NEXT.

FRED SHAW: As I was watching I saw an aircraft.  The bomb aimer said there’s a kite down there, and I looked and I saw a small high-winged mono-plane which I recognized immediately as a Norduyn Norseman.

Roy:  He recognized the Norseman, because he had trained in Canada where the Norseman was a familiar sight.

Roy:  So he could recognize it immediately.

TUKUFU: HE SAID THE BLAST WAVE FROM ONE OF THE EXPLODING BOMBS CAUSED THE SMALL PLANE TO CRASH.

FRED SHAW: As I watched him, just before he got to the leading edge of the wing, I saw him do a stalled turn to port and go straight into the drink. There was a white splash and that was it.

TUKUFU:  SHAW CLAIMED IT WAS YEARS LATER, AFTER WATCHING THE 1954 MOVIE “THE GLENN MILLER STORY”, THAT HE PUT TWO AND TWO TOGETHER.   HE SUDDENLY REALIZED HE MAY HAVE SEEN GLENN MILLER DIE. SHAW WENT PUBLIC WITH HIS ASTONISHING STORY. ROY NESBIT’S JOB WAS TO SEE IF THE STORY LINED UP WITH THE KNOWN FACTS.

TUKUFU: So, what you needed to do is know when those planes had turned around, what time.  And then what time, uh, Glenn Miller’s plane left the airstrip.

Roy: …and work it backwards to the jettisons area. And I needed to plot it all out.

TUKUFU: What is it that gave you the qualifications to make these kinds of calculations?

Roy:  Well, I had been a navigator, a navigation instructor.  I still had all my old instruments.  I knew exactly how to do it.

TUKUFU: THE LOG BOOK HAD THE PLANE RETURNING AT 14:20 HOURS.  NESBIT BELIEVED THIS WAS GREENWICH MEANTIME; LOCAL TIME WAS AN HOUR LATER, 15.20 OR TWENTY MINUTES PAST THREE.  THIS IS A CRUCIAL BIT OF INFORMATION

TUKUFU: THE BOMBERS HAD BEEN FLYING AT 225 MILES AN HOUR.  WORKING BACKWARDS, NESBITT CALCULATED THEY WOULD HAVE BEEN OVER THE SOUTHERN JETTISON ZONE 38 MINUTES EARLIER, AT EIGHTEEN MINUTES TO THREE.

TUKUFU:  MILLER’S NORSEMAN HAD LEFT TWINWOOD AT FIVE MINUTES TO TWO.  Its ESTIMATED AIRSPEED WAS 158 MILES AN HOUR.

TUKUFU: IT WAS CLOSE.  BUT ROY’S CALCULATIONS SHOWED MILLER’S PLANE WOULD HAVE ARRIVED AT THE JETTISON ZONE AT EXACTLY EIGHTEEN MINUTES TO THREE.  THAT WAS JUST AS THE BOMBERS WERE LEAVING THE SAME LOCATION

TUKUFU: So why didn’t Shaw and the gunner report this at the time it happened?

Roy:  Because, it was an aborted raid. And, in an aborted raid there was no debriefing. But, even if they had reported it.  I don’t suppose anything would have been done. I saw things in the war that…that I tried to report, and nobody took any notice.

TUKUFU: So they would have had no reason to report this?

Roy:  No.  If they had seen people in a dingy, they thought were Allied, then certainly air sea rescue would have gone out and they would have insisted when they got back… there were our men in a dingy there.  Do something about it. But, there was no possibility of any survivor from that aircraft.  It had gone in the water.

TUKUFU: A ONCE-SCEPTICAL ROY NESBIT NOW BELIEVED THE GLENN MILLER MYSTERY HAD BEEN SOLVED. EITHER A DIRECT HIT OR SHOCKWAVE FROM A JETTISONED BOMB HAD BROUGHT DOWN MILLER’S PLANE.

ROY: It was also discovered that this was the only Norseman in the air, at that time.  So what else could it be? It had to be Glenn Miller.

TUKUFU: So this is just a tragic case of friendly fire.

Roy:  It is indeed.  It just happened to be Glenn Miller in the wrong place at the wrong time. Poor chap. I mean its sheer damn bad luck. It’s one of the tragedies of war.

TUKUFU: Hey Wes. How ya doin’?

WES:  Yeah, good. So uh how did your interview with Nesbit go?

TUKUFU:  I’m going to tell you. He has this theory about friendly fire, and it’s pretty tight.

WES: So any doubts about the friendly fire theory?

TUKUFU: (phone call)   it’s a little odd Shaw didn’t report the crash. And he waited years to talk about it?

TUKUFU:  Look.  I’m open to an alternative explanation, but it is going to have to be very compelling.

WES:  Well look, I may want to do some due diligence on my own.

TUKUFU: Well let me know what you find.